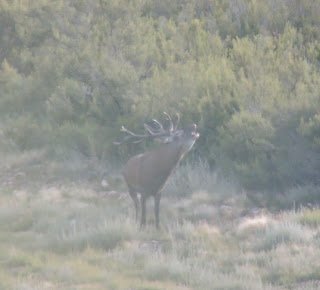 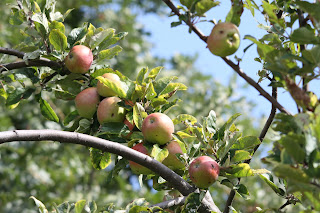 I write this newsletter surrounded by the sights and sounds of autumn here in the Sierra de la Culebra; fruit has ripened well and the slightly fractious stags of August are now fully into their rut with the bellowing to be heard echoing through the valleys from dusk till dawn and beyond. 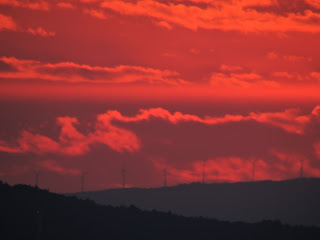 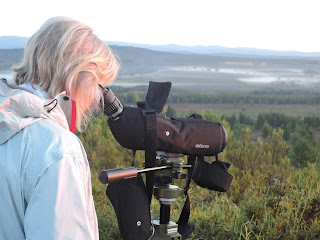 Our first tour of the month started on the first of the month and Paul and Zoe soon became adept at viewing through telescopes so that after a few hours of focusing on crows and then a fox with excitement, there were less mis-identifications and indeed on their second evening, both Paul and Zoe were able to enjoy good views of several wild boar flicking their  tails as they rooted in the short, light grass. 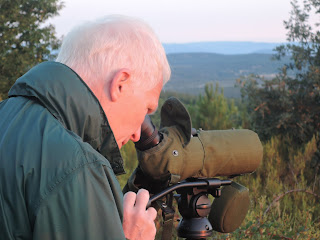 We also saw several red deer with young and one roe deer during that watch; scenes which were repeated with greater numbers the next morning.  By the evening of 3rd September, the presence of one  black and fifteen griffon vultures signified carrion of some sort, so our hopes were high for the morning watch. The next morning's mist cleared to reveal both species of vulture waiting with intent. The magnificent sight of about 35 red deer running apace in the same direction was certainly enough to signify something was afoot - and sure enough Paul, Zoe and John were able to watch three wolves come down onto the rocks, raising concern among the vultures, and then travel the various tracks until lost amongst the pine trees that skirt the river valley. All in all, an excellent sighting lasting about 12 minutes- and Paul and Zoe were justifiably delighted. After seeing fresh scat and tracks the day before close to this viewpoint, they had now seen "their " wolves! 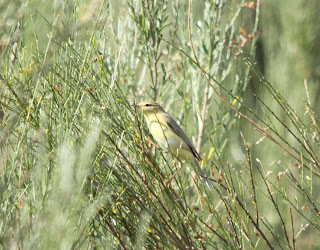 There were some very interesting birds around the village for Paul and Zoe to spot on their walks, which included short-toed eagle, lesser spotted woodpecker, spotted flycatcher, pied flycatcher and serin around the hotel tracks with rock bunting, Iberian grey shrike, 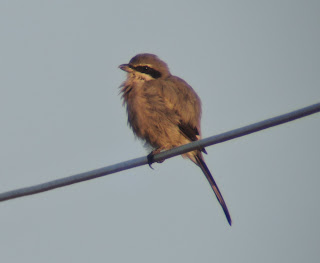 stonechat, Eurasian kestrel, nuthatch, short-toed treecreeper and crossbill all seen in the vicinity of the village, plus a mismatched pair of antlers!


During visits to neighbouring villages on 3rd September,Paul and Zoe enjoyed watching  this obliging hoopoe, 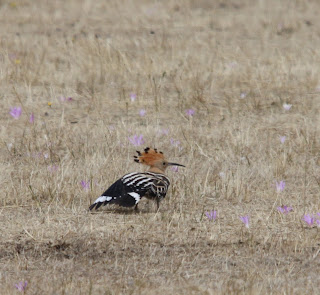 as well as seeing black-winged kite, crested lark, Northern wheatear, common buzzard and a lovely pair of hen harriers whilst the trip to the Douro gorge reaped wonderful sights of golden eagle, booted eagle, Egyptian vulture, red kite, Dartford warbler, house martin and crag martin to pick out only a few examples, plus an American crayfish - unfortunately more common than ever now, by the clapper bridge. 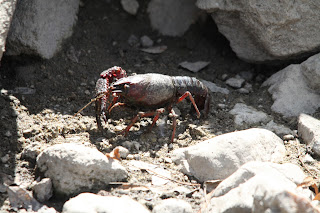 Red billed chough was heard but not seen on this occasion.

Luckily Paul and Zoe's timetable allowed them a morning walk before they left to explore other areas of Northern Spain, and they were rewarded with good views of black-eared wheatear and Iberian water frog. 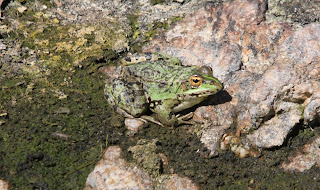 Zoe took a photograph of a red deer of which she is rightly proud. Thank you Zoe, for sharing your photos with all our Wild Wolf Experience Facebook friends earlier this month.

As we drove to the hotel with Mike and Meg on 6th September, we all were excited to see a short-toed eagle with a snake in its talons flying just above us. The evening watch allowed Mike and Meg to get accustomed to telescope viewing by focusing on close views of stag, roe deer and five wild boar!

The evening watch of 7th September was atmospherically overcharged when as early as 20:30 a lone wolf was seen. The presence of a stag confidently grazing nearby persuaded some of us that the wolf was gone, but Mike persisted with his viewing and at 20:45 the wolf reappeared allowing us to follow its progress through varied heather and scrub-land until lost from sight in an undulation. 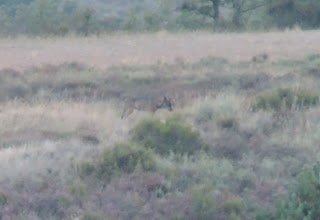 The next morning was terrific at the same
viewpoint with one wolf seen at the corner of the wood, one other wolf spotted by Meg loping across the field behind us and another wolf crossed right in front of us merely 250 metres away! We seemed to be surrounded by wolves going about their business! All this to the background of restless stags fighting and roaring further off. Throughout much of this watch Mike, Meg and John could also watch the dramatic mobbing of a persistent sparrowhawk by several crows.
Subsequent watches were less eventful, giving us wild boar sightings and plenty of red deer, but how wonderful to have seen the wolves here so clearly in such a special atmospheric setting. Mike was very happy to write his sighting on the board that evening. 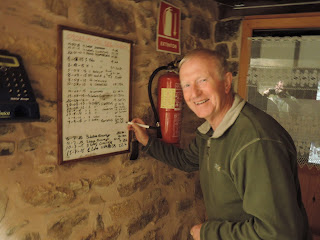 During daytime tracking activities and walks around some of the quaint villages in this area - places that still are living, working villages although they seem to be relics from a former century - Mike and Meg were lucky to see new species which included pied flycatcher, spotted flycatcher and  lesser spotted  woodpecker by the village cemetery plus great tit, blue tit, 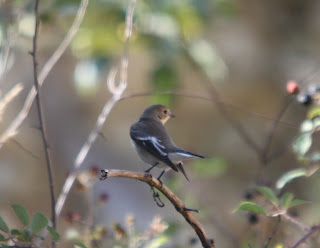 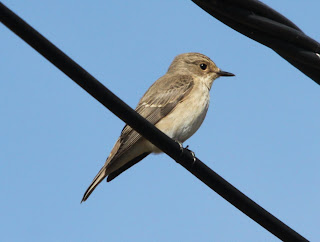 booted eagle, black vulture,black kite and also a Lataste's viper sunning itself by the village allotments. 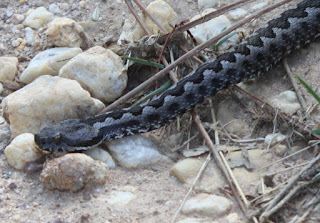 Honey buzzard was seen at Folgoso on 8th September and a visit to Villafafila on 9th offered up some wonderful sights of about 30 great bustards, plus hen harrier, marsh harrier, lesser kestrel, cormorant, mallard, kingfisher and common sandpiper.  Mike,Meg and John enjoyed watching two otters at the Rio Esla.

We have again enjoyed the company of former clients now regular visitors and friends Terry and Ros on many occasions this month and John and Terry were amazed to be able to look down on raven, griffon vulture, 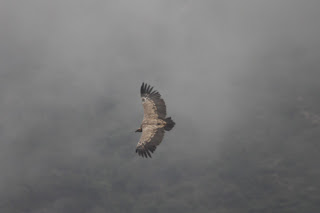 short-toed eagle and chamois amidst the stunning Somiedo scenery during 12th/15th September where the prime target was Cantabrian brown bear.  One morning a large, dark female bear, possibly with one cub could be seen ambling across open ground but she had almost unbelievably disappeared from view by the time Terry was able to scour the hillside with his telescope.  However, Terry seemed to make other four-legged friends during those days packed with super walking in surprisingly settled weather. 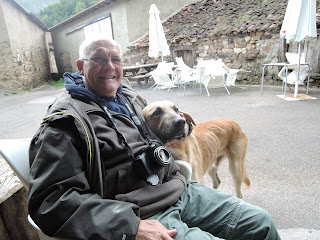 Later in September John was delighted to be able to show Terry, Ros and Linda Eurasian otter en route to Villafafila. It has been lovely this month to have Linda with us again for her second successful Watching for Wolves tour and as well as enjoying the antics of the otter, they spent time watching kingfisher, purple heron, grey heron, gadwall, mallard, coot and moorhen, plus several hundred house-martins gathering pre-migration. The intrepid party of John, Linda, Terry and Ros all enjoyed excellent views of about 60 great bustards, plus lesser kestrel, common buzzard, Montague's harrier and marsh harrier.

Linda's tour started in earnest straight after her Madrid collection with clear views of two black vultures and several red and black kites. This pattern of interesting bird sightings continued throughout the week with black vulture, 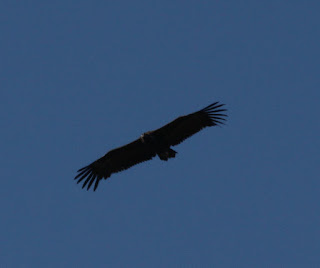 griffon vulture, raven, red-rumped swallow and Iberian green woodpecker near Riomanzanas and tremendous views of golden eagle at the Douro Gorge. on 22nd September, plus four azure-winged magpies and a kingfisher at the ancient clapper bridge.

But of course wolves were Linda's main focus, hoping to repeat her success of last year. On the morning of 18th September, one day before Linda arrived, three wolves were seen at 09:00 sniffing the air as stags were fighting and roaring some distance away,and on her first wolf-watch on the evening of 19th, we enjoyed excellent views of wild boar,and watched the drama between a hopeful stag pursuing a not-so-interested hind, but no wolves. Red deer were of course very evident this week at the height of the rut and we have all been treated to some lively episodes involving stags chasing hinds, stags chasing stags and stags attacking random trees and bushes. 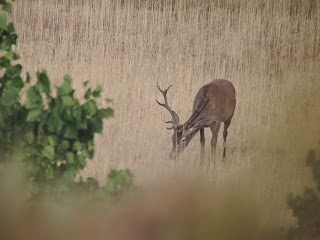 Over the first couple of days, Linda and John found several examples of fresh wolf scat, even locating some good wolf tracks despite this month's very dry conditions.

On the evening of Monday 21st, Linda told us, " Well, it was the Tuesday morning last year when I had my first wolf of the tour." So no pressure there then!! However, almost as if scripted, the next morning Tuesday 22nd, Linda and John found themselves watching three wolves in wonderful sunshine, loping along the trails to be eventually lost to sight in the pine copse by the water source. It was back to the same viewpoint that evening when at 20:15 the large,dark male wolf made an appearance coming out from the river bank and progressing through the heather to the brow of the hill. 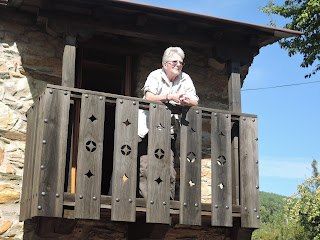 Linda saw four wolves the next morning 23rd and was able to watch the interaction between them as the early morning mist cleared with the rising of the sun which augured another fabulous day. 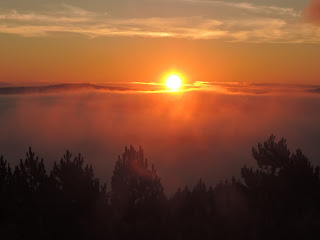 So a week for Linda of wolves, renewing old friendships and making new ones, revisiting some familiar territory while exploring plenty of new areas.

The final bird noted was a light-phased booted eagle spotted on the way back to Madrid airport on the afternoon of 26th September, meaning that Linda had seen three species of eagle during her week...plus wolves on three occasions too of course!


"Thank you again for a wonderful time; I am already pining for San Pedro.....John's enthusiasm and love of wildlife especially wolves really shines through and makes every day a great experience - I can't wait for next year!"  Linda September 2015. 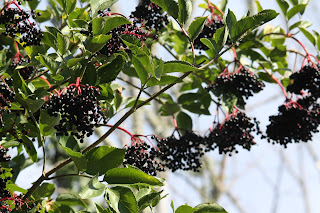 This September of "mists and mellow fruitfulness" ( apologies to Keats) has been a busy month packed with wonderful wolf sightings and John and I have had a super time sharing these with friends and clients alike. 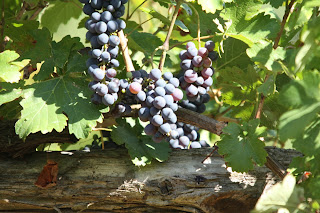 This newsletter must merely be a digest of some of the more memorable times...too many to recount in detail here...but I hope you have enjoyed my way of sharing these here with you too.

( All photos taken by John during September 2015 except the two credited to Linda and Zoe.)
Posted by Wild Wolf Experience at 06:23