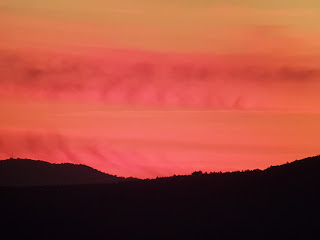 This has been a tremendous period for wolf watching and I know that many of you will have kept abreast of these wonderful moments via the Wild Wolf Experience Facebook page, where John manages to post some of his sighting results just about as they happen. Alison arrived for her Watching for Wolves tour on 3rd October with John having had excellent views for the first two days of the month and so hopes were high. Morning mist hampered viewing on Alison's first wolf watch but she enjoyed watching red and roe deer in such atmospheric surroundings. A black vulture added to the excitement and the obvious wolf presence noted by scat and tracks during daytime walks merely served to heighten excitement and desire for a sighting. 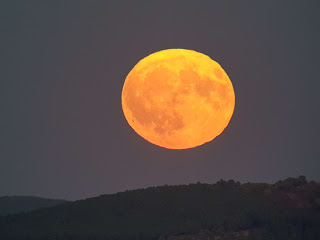 The wolf when it showed could not have been better for Alison. At the beginning of the evening wolf-watch on a beautiful 5th October evening with visibility calm and clear with the promise of a huge harvest moon, John had just set up Alison's scope and was tending to mine, when Alison whispered breathlessly " Wolf!" and a lone wolf was watched by a transfixed Alison as it walked down the firebreak in front of our viewpoint only to pause and raise its head as if to acknowledge her presence before turning to the left to move soundlessly through the undergrowth eventually to be lost in the taller heather. It was an emotionally-charged moment during a day which held great personal significance for Alison and it could not have been bettered.Every time we see wolf it is special and exciting but occasionally we realise the lifetime memories we are giving so many of our clients and then we know why these tours are so special. Many of Alison's photographs and memories of this tour are to be found  at http://www.travelcounsellors.com/alison.kent.

In mid-month John was delighted to show Loraine fantastic views of seven wolves interacting for most of her watch, making her 70th birthday Spanish/Portuguese tour even more special. Again, memorable moments. 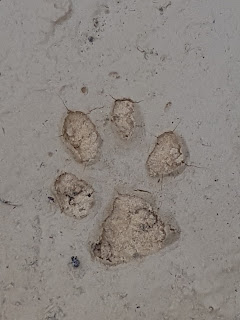 Iain, Rohanne, Alex and Isaac were very excited for their first ever visit to Northern Spain and they all quickly became proficient in using the telescopes, pointing out red and roe deer, vultures and wild boar during their watches, while seeing Iberian hare on two separate occasions. They had seen plenty of wolfscat and wolf evidence during daytime tracking expeditions, but the true infectious enthusiasm was when they were able to watch four wolves playing, running and generally interacting; an experience which was repeated the following morning.  The whole family entered into each watch experience whole-heartedly and gained much enjoyment through all the aspects of their time here in the Sierra de la Culebra. 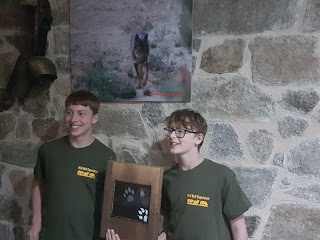 Full of enthusiasm,Iain, Rohanne, Alex and Isaac left us on 27th October, exclaiming that this would not be their last visit, and we certainly look forward to seeing them again.

Just a couple of days later John collected Ian and Liz for their Watching for Wolves tour beginning on 30th October. Their first day was spent tracking and searching for signs of wolf and Ian and Liz were interested to find plenty of examples of fresh wolf tracks and scat in the mountains. This was exciting indeed but a tremendous first day was brought to a climax with the appearance of two wolves separately during the evening wolf watch. Each wolf had distinctively different colouring and they were moving about the area independently of each other; this was a treat indeed!

Liz in particular was overjoyed to achieve her aim of seeing wolf in the wild but the views just kept on getting better as on the following morning John, Ian and Liz were treated to an epic watch of eight wolves for a total of 2 1/2 hours! At one point, Ian had black vulture, red kite and wolf in his scope at the one time! The evening watch of 1st November was also fascinating with all of us watching the interplay between two wolves as they greeted each other on the plain in front of our viewpoint. Ian and Liz watched with determination during every wolf watch and even during some fairly squally weather when the Sierra de la Culebra experienced the first rain since May, they were not to be put off their watch, and this admirable attitude paid off when John, Ian and Liz were delightedly watching 7 wolves within minutes of setting up their scopes on a very rainy Friday 3rd November. Certainly they were the only wolf watchers there in such inclement weather, and this just made the experience all the more special. Liz was a happy lady to have achieved her aim of seeing a wolf in the wild and moments such as these make it very special for John and me too at Wild Wolf Experience.

Ian was keen to find certain birds too during this tour acknowledging that it is not the most productive time of year for birds here in the Sierra de la Culebra.  However he was delighted to notch up over 75 species during his tour with us. 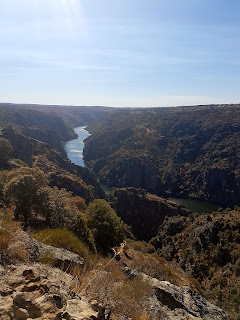 Notable amongst these sightings were over 80 griffon vultures very close during their time at the Douro Gorge plus golden eagle, red kite, crag martin, sparrowhawk, crested lark, woodlark, rock bunting, rock sparrow, common buzzard and approximately 50 azure-winged magpies during that day visit. Time in Sanabria garnered siskin, great crested grebe, song thrush and red kite. Kingfisher, gadwall, potchard, mallard, teal,little grebe and great white egret were seen on the Rio Esla, and at Villafafila Ian, Liz and John watched a red fox stalking the waterfowl plus enjoying views which included great bustard, common crane, red kite, marsh harrier, hen harrier, common buzzard and Eurasian kestrel. Certainly Ian and Liz felt their time here with us had been so worthwhile and I know they have since enjoyed following the antics on Facebook of the young wolves they had been so fortunate to be able to see during their extended Watching for Wolves tour with us.


By now we were well into November and many of you will have been amazed at the fantastic videos John has posted on our Wild Wolf Experience Facebook page; wolves adult, sub-adult and youngster being totally undisturbed by our careful, unobtrusive watching and we have all delighted in their pack interaction, greeting, playing, hunting large prey such as stags or small fry like voles; all in all it has been a fabulous time with some very special wolf action to be privileged to view and share.


So it was with high hopes that we greeted Mike at Asturias airport who was spending time with us on a Watching for Wolves tour having previously searched for wolf in Romania, Poland and Canada with little success. An experienced wildlife watcher, Mike was wanting to dispel the image of the wolf as his " bogey-animal"! So it was on the evening of the 29th November that Mike had his first watch which was interesting with its large number of red and roe deer, plus hen harrier and griffon vulture, but no wolf appearances. However, the first morning of Mike's tour, 30th November, was just tremendous!


In clear bright sunlight, Job and Mike were able to see three adult wolves  as they hunted on the plain in front of them,. One wolf sat down at one point and seemed to be watching for further signs while the other two adult wolves moved down the hillside, spreading out in their hunt over the frosty heatherland. Then 6 further wolves appeared, this time youngsters, who moved steadily and clearly through the vegetation and John was able to catch this movement as they fanned out over the hillside with the morning sun casting their strong, long shadows across the vegetation. The sight of a golden eagle atop a small pine tree was almost ignored in the excitement. Each day of Mike's tour gave wolf sightings, with the mornings having the best results. John and Mike spent the early daylight hours of 1st December watching and filming two young wolves interact and play, totally relaxed with each other whereas the following morning of 2nd December this number was swelled to seven wolves over a long time in superb clear light with no heat haze; just perfect viewing conditions.


The final wolf watch on 3rd December did not disappoint with a briefer view of wolf plus many red deer offering interest and excitement, and we were all pleased that Mike's dogged determination to see wolf in the wild had eventually paid off, with dividends.

Day visits enjoyed included good close views of griffon vultures galore at the scenic Douro gorge plus 2 golden eagles.  A special sight was that of black-shouldered kite on the return journey from Portugal. 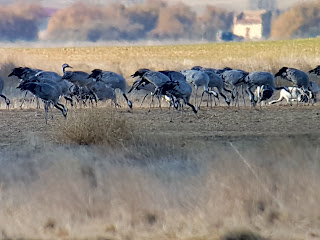 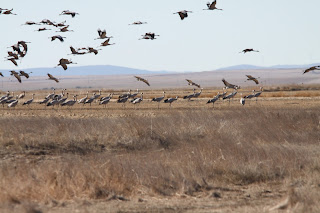 Mike is a keen photographer, displaying and selling his photos; they are well worth a look.

great trip - loved the wolves and the villages 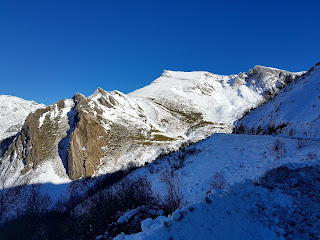 Reports of severe snowfalls in Asturias added a frisson of excitement as we prepared for our early morning road trip to Asturias airport on the final morning of Mike's tour, but really we did not need anything to create excitement as the events of this Watching for Wolves tour had been thrilling enough for all of us. However, just as John and I left our home village of Cional to collect Mike from the hotel at 5:50 on that morning of 4th December, we had a close encounter with a wolf as it ran alongside our road to turn left towards the lake! Each day something exciting to report!

The sightings have continued to thrill us here in this most special of Spanish settings, and I hope you have all enjoyed reading and seeing just some of these results over the past year. 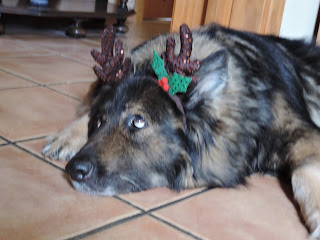 John and I wish you all a very happy Christmas and look forward to sharing even more of our adventures here during 2018.


Margaret.
Posted by Wild Wolf Experience at 04:57 No comments: