The Boss Marking his Territory


John filmed this alpha male marking his territory this morning.

Plus a group of red deer stags sporting their velvet antlers in beautiful morning light.


Margaret.
Posted by Wild Wolf Experience at 09:29 No comments: 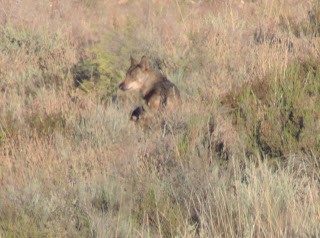 An expert in camouflage, this female wolf did not evade John's camera this morning here in the Sierra de la Culebra.


A male  from the pack came out into the open later this morning along a forest track, as you can see in John's video.

Posted by Wild Wolf Experience at 10:22 No comments:


John was caught unawares yesterday morning as a wolf crossed the road from his left only 10 metres away. He managed to get this video, with apologies for the sound of his running car engine!


Posted by Wild Wolf Experience at 07:35 No comments: 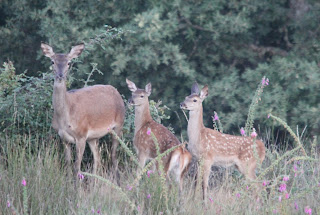 John caught these beautiful creatures on camera near our home here this morning.

Posted by Wild Wolf Experience at 02:57 No comments:


The baking heat felt this month has meant that many of our target animals are spending many hours lying up but John has persisted, being rewarded with some beautiful sights of hinds coming out of the forests with their newborn fawns which gambol and jump around in sheer joy of being alive. The dawn light has been particularly atmospheric, as we can detect in John's shot of these two roe deer below. 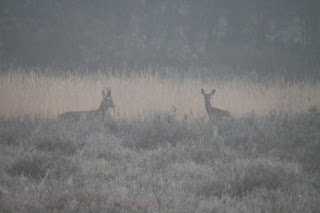 We love this photo taken by John  featuring a red deer hind against the morning sun. 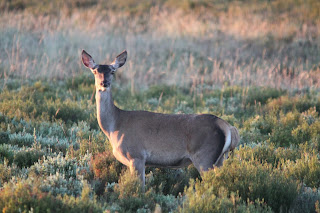 The wild boar have been visible too, particularly in the evenings,and we have counted upwards of 15 on occasion this month.

An exciting sight on a couple of occasions this month has been the close view of three, black-winged kites. Of course John noted their presence earlier this year, but to see three so clearly several months later is satisfying indeed. 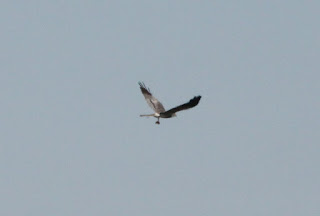 John managed to photograph a Montague's harrier close to our village as it flew past carrying prey.


Friends Graeme and Rhona were staying with us at the end of the month and they count themselves extremely lucky to have  seen a large dark wolf at 07:15 steadily walking the paths on the first morning of their visit, 28th June 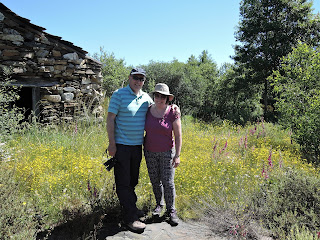 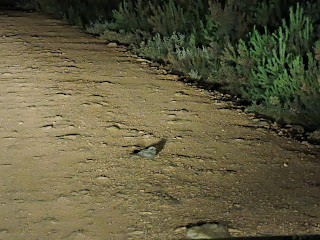 The full moon could be seen clearly in the dark skies of our watch. 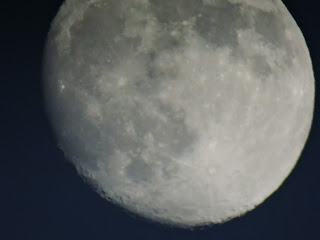 Earlier this year John was interviewed,along with other people involved with the wolf in this area, by Charles Penty of Bloomsberg Press and we now can read the well-balanced article by Charles which appeared in the Washington Post in April.  We were also happy to provide the newspaper editor with one of our good photographs of a truly wild Iberian wolf.  Many photographs seen on the internet are of captive wolves but certainly none of the wolves we feature are anything other than wild predators. These are obviously harder images to get, but oh so rewarding when you do get them! The article is copied below:-.

Madrid – Antonio Navarro remembers when hunters paid 14,900 euros ($16,020) for rights to kill wolves nine years ago in Villardeciervos, a village near Spain’s border with Portugal. Now, they can go for about a quarter of that.
The drop shows how hard the Spanish countryside was hit by the five-year-long economic slump from which the country is now emerging, said Navarro, a former economist at power company Iberdrola who now runs a hotel in the region. It may also be evidence that wolf-spotting tours and environmental awareness are leading Spaniards to see the animals as better alive than dead, he said.
While still viewed as an ancestral foe in the Spanish highlands — a wolf corpse was left hanging from an Asturian road sign last month — farmers and conservationists are finding enough common ground to allow the mythical predators to survive in their natural habitat, said Fernando Fernandez, a spokesman on rural affairs for the Cantabrian Regionalist Party.
“Perhaps no other species stirs so much hatred and emotion at the same as the wolf does — it’s part of our Spanish experience,” said Fernandez, who grew up in a region of southern Cantabria where wolves roamed. “It’s an emblematic species and it must survive but mutual understanding on all sides is crucial.”
Canis lupus signatus, the wolf breed native to the Iberian Peninsula, has been able to extend its presence beyond its stronghold in the north west of Spain even though overall numbers may not have risen, said Juan Angel de la Torre, chairman of the Association for Conservation and Study of the Iberian Wolf. A 1980s study by the Institute for Nature Conservation estimated the wolf population at up to 2,000, distributed over 100,000 square kilometers (62,150 miles).
The annual March auction in Villardeciervos of permits to kill wolves and other animals, including roe and red deer, puts the village of 450 on the front line of the cultural debate over the canine predator’s place in Spain. This year’s auction raised about 50,000 euros to be distributed among villages in the Sierra de la Culebra hunting reserve, El Norte de Castilla newspaper reported.
Hunting is the best way to control wolves in the region that now number around 90 prowling in about 10 packs, said Jose Manuel Soto, the official responsible for environmental issues in Zamora at COAG, a farmer’s union.
Castilla de Leon is home to about 60 percent of Spanish wolves and the population in the region rose 20 percent from 2001 to 2013 to about 179 packs, said Javier Munoz, the regional government’s co-ordinator of environmental services. Control of the numbers through hunting is necessary and does not affect the conservation of the species, he said by phone.
“Wolves have always have been here but that doesn’t mean there can’t be any control,” said Soto. “You can’t put wolves above humans because that’s going to end badly.”
Changing attitudes toward wolves have made hunters more discreet about wanting to kill them.
“It could be that fashions have changed and not as many people want to hang a wolf’s head on their wall,” said Antonio Uzal, a lecturer in wildlife conservation at Nottingham Trent University in Britain.
The regional government’s policy of promoting wolf hunts also goes against economic good sense in a remote part of Spain that stands to gain much more from promoting the animal’s presence, said Navarro. He now runs a country hotel offering wildlife activities including “wolf tours” in San Pedro de las Herrerias, a village in the hunting reserve.
“There are more and more people coming here because it’s home to wolves in the wild,” said Navarro, who estimates that 70 percent of his revenue comes from “wolf-spotters” who travel from all over Europe to see the animals. “It doesn’t make sense to kill them.”
Wolves and the legends surrounding them have kept their hold on the Spanish imagination, said Fernandez.
“The hatred comes from the time when Spain was much poorer and if a wolf killed six or seven of your sheep it was a disaster,” he said.
For the tourists who come to Sierra de Culebra to try to see wolves, the animals represent nature in its wildest form, said John Hallowell, who leads tracking trips in the region with his firm Wild Wolf Experience.
“I’ve been fascinated with wolves since I was a child,” he said.
Last month the regional government of Asturias agreed to a plan to manage its wolf population. On the same day, a wolf corpse was found hanging on a road sign in the Asturian town of Lena, according to El Comercio, a local newspaper.
“There are still people out there that won’t accept the presence of wolves of any kind,” said Uzal. “This is their way of saying they’re still here.”
Earlier this year, environmental groups and unions in Cantabria reached agreement on a wolf-management plan that accepts the need to control populations while accepting that the animal is here to stay.
A better response would be a national wolf plan that takes account of local conditions rather than different regional plans, said Uzal.
Wolves can travel 100 kilometers a day (62 miles) and constantly move between different hunting jurisdictions while the species is protected in neighboring Portugal. They are a fact of life in the Sierra de la Culebra and local people know how to live with them, said de Soto of the farmers’ union, who keeps sheep.
“If you’re going to farm sheep here, you must have a good shepherd and you must have mastiffs to keep the wolves away,” he said. “What we can’t have is people from Madrid or elsewhere telling us how to manage how we do things.”

Often heard here in June, but seldom caught on camera, John was pleased with his video of  Eurasian cuckoo.
.

We enjoyed the company of two former clients,now good friends,Ros and Terry,who spent part of June here in the Sierra de la Culebra. They are now regular visitors here, and yet Ros and Terry found that the 'places-to-be-visited-in-Culebra' list was actually longer at the end of their stay than it had been at the beginning! So we look forward to their company here again in September. We enjoyed lunch at one of our favourite restaurants in the area, where chef Theo always gives us interesting,traditional, local food. 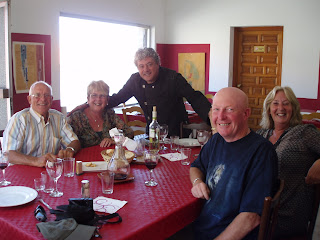 This little-known area of rural Spain seems to exert  a strong pull for many who return to benefit from the peaceful and relaxed atmosphere. However this does not mean that the roads here are busy with incoming tourists hungry for respite. In fact I attach a photo taken by Linda last September depicting a typical Culebra traffic jam.

(We look forward to Linda's return visit as well in September 2015.)

It is therefore all the sadder when we come across victims of road kill here. Thankfully this happens only rarely.On 29th June,this young pine marten must have been hit by a vehicle in the early morning 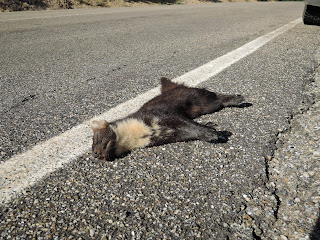 A sad sight,but be reassured we did not just leave this little creature by the roadside.

Thank you for reading thus far, and I wish you a continued summer of wonderful weather and fantastic wildlife sightings. We await the appearance of this year's wolf pups here in the Sierra de la Culebra! 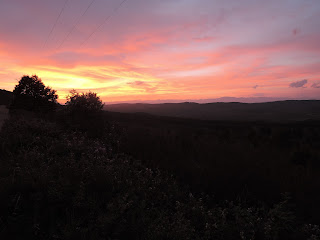 All photographs and videos taken by John during June 2015,unless otherwise stated.

Posted by Wild Wolf Experience at 05:24 No comments: