The summer of 2016 has been stupendous in so many ways for us here at Wild Wolf Experience.  We have had our busiest summer yet encompassing successful lynx, bear and wolf tours. As well as meeting several newcomers to Wild Wolf Experience,we welcomed back Eddie and Tina for another wolf/birding week, Pernilla and Mikael for a wolf/bear tour after their successful Looking for Lynx tour two years ago, Keith and Rosemary who enjoyed a fabulous Looking for Lynx tour with us this year after seeing wolf with Wild Wolf Experience some years ago, and Linda who has just completed her third successful Watching for Wolves tour with us. John and I appreciate the contacts and friendships that build up through such return visits and we thank you for your confidence in us.  We always do our utmost to provide our clients with memorable wildlife experiences during all three of our tours.

Migrants were arriving and clearly displaying throughout April with first sightings of Montague's harrier on 4th and bee-eaters on 24th April. 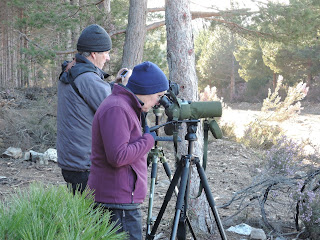 Geoff and Anne, our first clients from the
Channel Islands, were straight into the action on 6th April with super views of over 200 great bustards at Villafafila, plus goldcrest, Iberian chiff-chaff, black-winged stilt, avocet, shoveller, lesser kestrel, short-toed and booted eagles, black and red kites, Montague's and marsh harriers, serin and stonechat - all before lunch on the first day!


We spent that evening locating red and roe deer in the telescopes to the accompaniment of cuckoo and scop's owl.

A change of viewing site owing to misty conditions on the morning of 7th April was very fortunate for John and Geoff as their second site allowed them both to watch three wolves, albeit some distance away, for about 15 ,minutes, beginning at 08:45.  Further tracking revealed some very fresh wolfscat close by.  Unfortunately Anne wasn't there to  see these three predators and although she made sure not to miss one minute of the next watches, the wolves were proving elusive...until Geoff and Anne's determination was rewarded on the morning of 9th April with the stunning sight at 07:45 of three wolves chasing six deer right across the valley.  What a treat to watch! But this was not the final lupine encounter for Geoff and Anne.  Despite encroaching rainclouds, they were out with John in the early morning of 11th April and were again excited to be able to watch three wolves from 07:30 until 07:50 until bad visibility from heavy showers hampered any further sightings. 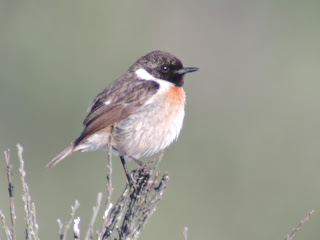 The river Duero was in full flood when Geoff, Anne and John enjoyed a day visit to the magnificent gorge, appreciating good views of Egyptian vulture, griffon vulture, black stork,red-billed chough,blue rock thrush,sub-Alpine warbler and a superb golden eagle display.  It was a treat to sample the serene atmosphere at the old clapper bridge which reaches over a river at present awash with delicate white flowers. This place will feature highly amongst the memories Geoff and Anne take away with them.

"Now that we are back home and have gathered our thoughts we must congratulate John and yourself on organising such a wonderful experience for us. We really enjoyed all of the spectacular wild life that we saw and the visits to the little villages were very interesting. Being able to sample local foods at lunchtime was very good since it was something that would not have been possible without John’s help. The trip down the Douro gorge was spectacular and, once again the organisation and scheduling of the birds was admirable. The hotel was very well situated for the various observation sites and provided comfortable accommodation and enjoyable dining
.
Thank you once again for making our trip so enjoyable and we look forward to seeing you again in the future.
Anne and Geoff . April 2016."

Further memories were created with Geoff and Anne during what we thought was going to be a quiet wolfwatch on the evening of 9th April. The obvious tense behaviour of four stags alert in the heather before racing full pelt into the relative safety of the forest, alerted our attention and at 21:00 we stiffened as the sound of a lone wolf howling reached our ears.  A little later, there was a response from nearer to our viewpoint, this being howls from several wolves which were repeated from further afield as dusk enveloped the valley. Such an evening indeed creates lifelong memories.


At Villafafila,Joe and Sharon too saw the great bustards, plus cattle egret, spoonbill, corn bunting ,wheatear, shelduck and coot with bee-eater and blue rockthrush at Rio Esla. Migrants were starting to arrive each day here in the Sierra de la Culebra and by the end of April Joe and Sharon were treated to many displaying species, including hoopoe, Bonelli's warbler, Dartford and sub-Alpine warbler, crossbill, cuckoo, short-toed treecreeper, nuthatch, black redstart and alpine swift. 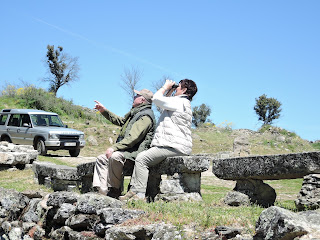 After this Watching for Wolves tour Joe and Sharon set off to spend a few days in the interesting and picturesque town of Salamanca, only two hours from here, thereby finishing off what .proved to be a fascinating Spanish holiday.

The pattern of migrant arrivals continued during Eddie and Tina's tour and on the very first morning they enjoyed spotting sparrowhawk, Eurasian cuckoo, black kite, red kite, booted and short-toed eagles, buzzard, common kestrel, and stonechat plus the arrival of swifts flying round the hotel. Golden oriole was seen on three consecutive days 13th and 14th May, as was Bonelli's warbler. 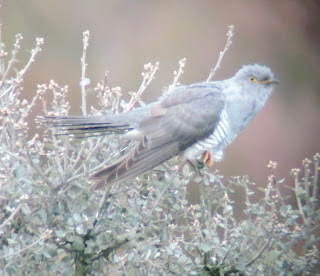 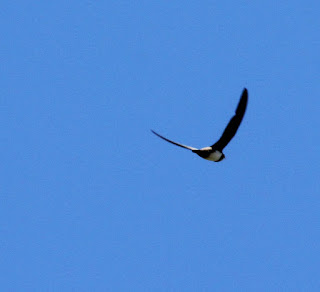 A feature of Kim and Nick's Watching for Wolves tour was the close view and photographic opportunity of a large male wild boar, quite an experience for all! We have certainly had good views of wild boar this summer. 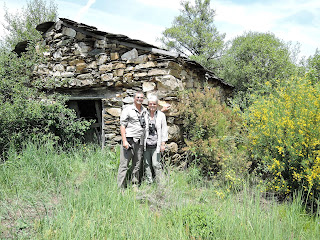 This is the time of year here when the wild flower meadows are at their best and Kim and Nick enjoyed the relaxation and diversification of flora and fauna in such unspoilt areas. 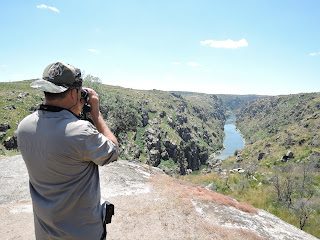 On the morning of 24th June, John and Janet were treated to good views of a lone wolf walking across a ploughed field in the distance. Enough to whet their appetites for even better views! Keen birders, during their 4 night Watching for Wolves tour they notched up well over 100 bird species!


Deepak and Olivia arrived on 29th June and Olivia in particular was determined to see her first wolf. Determination is part but not all of wolf sightings of course, but we were pleased that she was rewarded with a good, clear view of a pale-pelted wolf loping along the track before diverting through the low heather at 08:00 on 30th June. On that successful morning watch, they also saw red deer, roe deer and wild boar.

The unseasonable intense heat of this August 2016 made sightings difficult as the wolves were keeping further into the shade of the forest for longer, but as September evolved a more autumnal feel to the air in morning and evening greatly increased the opportunity for good sightings, and what a successful month September has been for the wolf watchers with us! The cubs have emerged from the various dens and Linda, on her third Watching for Wolves tour with us, saw wolf on five of her seven days here, starting with the first morning. 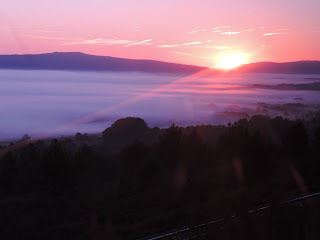 Some striking sunsets and sunrises provide perfect photo opportunities in this most photogenic part of  Spain and Linda enjoyed making the most of this with her photographic skills.  Along with friends Terry and Ros, John and Linda enjoyed a wonderful morning boat trip courtesy of Aherca.com, where the morning mist cleared and rutting red deer and peregrine falcon were among the wildife sights enjoyed as they visited inlets and bays otherwise inaccessible by car or foot. 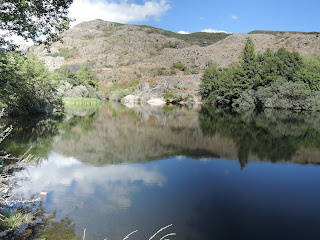 Linda also enjoyed a visit to Sanabria where the imposing castle and stunning lakeside views skirted by a dramatic skyline of mountain peaks, all combine to make one feel very small in an area of such presence and atmosphere.

August/September is also a very promising time for bear sightings and our first Browsing for Bears tour during these months was with Pernilla and Mikael from Sweden, 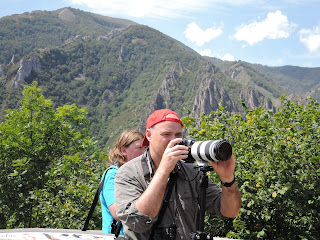 followed by Neil and Maureen from Scotland. As well as excellent bear sightings,the agility of the chamois could be seen on almost vertical slopes. 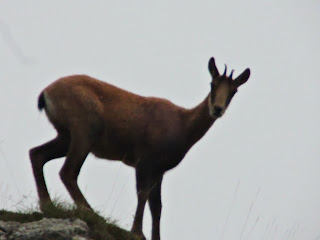 Close views of griffon vulture against such a magnificent backdrop were tremendous! 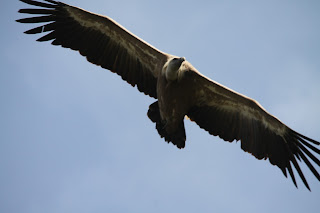 The weather is always a determining factor in this mountainous area of Spain, but this September viewing conditions proved excellent and our tours enjoyed wonderful views of bears, as detailed on our website.Coming from the Highlands of Scotland, Neil appreciated the stunning mountainous views, feeling like a home from home. 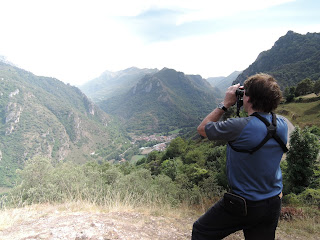 Both tours were able to watch several individual bears for a good length of time feeding on the Alpine buckthorn berries on the mountain slopes. 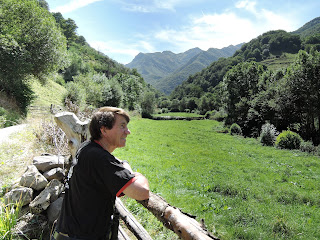 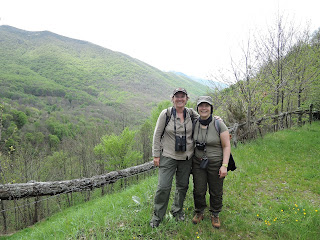 Earlier in the year, during May, John took Karen and Elaine to Asturias on the first part of their combined Bear/Wolf tour and in Asturias the weather was less welcoming. 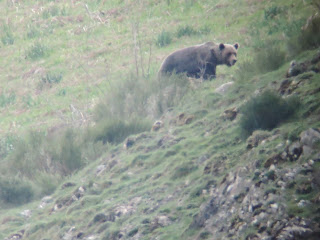 Luckily both Karen and Elaine were prepared for all conditions and their perseverance paid dividends with excellent sightings of six individual bears , followed by good views of wolf and wild boar during their time here in the Sierra de la Culebra.

John was lucky to escape the dreadful rainstorms we experienced here in the Sierra de la Culebra in the week beginning 13th April and he also counted himself fortunate then to welcome Keith and Rosemary - wolf-watchers with us in 2013 - to begin their Looking for Lynx tour in the sunshine of the Sierra de Andujar. John, Keith and Rosemary enjoyed good views of wild boar,blue rock thrush, Spanish ibex, Sardinian warbler and moufflon on 15th April, their first full day, plus greater mouse-eared and Daubentin's bats. 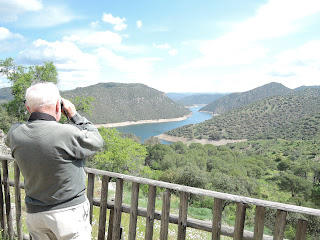 Three magnificent Spanish imperial eagles started 16th April off well and they went on to watch bee-eater, griffon vulture, black vulture, woodchat shrike, Iberian grey shrike, cuckoo, hoopoe, corn bunting and fallow deer until the evening watch gave Keith and Rosemary their first views of Iberian lynx.  An adult and a semi-adult could be seen walking along the ridge of the hillside to the accompanying calls of the azure-winged magpies. A large fire salamander was a treat to see on the morning of 17th April but the main event of the day which outshone some wonderful imperial eagle displays, was their view of a large Iberian lynx which John first spotted whilst scouting around further down the hill.  He ran up to Keith and Rosemary and they managed to get to where this magnificent specimen was sauntering toward the bridge of the hill, marking territory as it went along.

A stunning and satisfying finale to a fabulous tour in a beautiful area of Spain. We were delighted that Keith and Rosemary chose to travel with Wild Wolf Experience again, and enjoyed renewing their acquaintance with such a fulfilling tour.

Firstly a very big thank you to John for making our trip to Andujar so memorable.  What a stunning area, excellent game viewing and very comfortable accommodation.  I can't believe we were so lucky to see such a variety of birds, mammals and reptiles.  We really appreciate John's expertise and look forward to seeing his photos and videos.

So, a summer of success and great tour experiences, with the only thing lacking being the monthly Newsletters.  However, now that the new website is up and running, thanks to the expertise and patience of Matthew Drake of My Silver Tree, I am happy to respond to the various requests for the monthly Newsletter to be reinstated here, and I look forward to reporting at the end of October on this blog once again. For more up to date happenings, please keep checking the "Latest News " section of the website and of course, our Wild Wolf Experience Facebook page for some fantastic photos and videos all taken by John in the area he loves.

Posted by Wild Wolf Experience at 03:36 No comments: