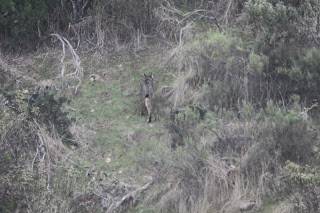 John met up with Mike at Madrid airport late morning ready to set off for Sierra de Andujar in good weather.There were plenty of Red Kites and Spotless Starlings overhead as they stopped for a lunch of Iberian ham and local cheese. Nearing Andujar, John spotted an unfortunate victim of roadkill, the first Azure-winged Magpie of the tour, lying at the side of the carriageway.They arrived at the charming Andalusian farmhouse which just borders the park, and after greeting hosts Roland and Mercedes, they soon settled into this welcoming base. 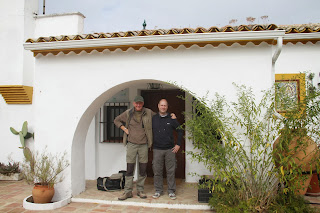 After time spent unpacking, John and Mike then headed off to a spot deep in the park for their first try for Iberian Lynx.

Scanning the area, they could see large numbers of Red Deer and the valley was echoing with their primeval roars as the dominant stags sent out their challenges to any marauding younger individuals. The deer rut is much later here compared with that in the Sierra de la Culebra where the rut is more or less over by the last week in October. 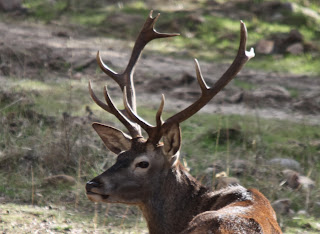 Several Azure-winged Magpies,more lively than the first one encountered, were flying around and they could be heard as they foraged amongst the undergrowth.  Red-legged Partridge were calling from the rocks below as several Common Buzzards glided lazily across the valley and a Kestrel put in an appearance before flying off stiff-winged over the ridge. It was noted that no rabbits were visible from the viewpoint which was worrying as this is the main diet of our target species, the Iberian Lynx. Fluctuations in the rabbit population can have a huge effect on the breeding success of the lynx, and numbers can soon fall if the supply of rabbits is not available. After a couple of hours another group of watchers further along the viewpoint were lucky to have a sighting of a lynx going up through the valley.  This was hopeful! Retiring to the hotel, John and Mike enjoyed a tasty 3 course home cooked dinner and made acquaintance with some fellow guests from the Netherlands. 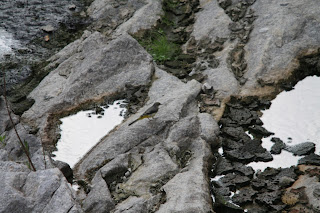 John and Mike set off after a lovely breakfast replete with home-made preserves and Roland's own home-baked  breads. After watching close views of Red and Fallow Deer, Mike was delighted to see his first Hoopoe. 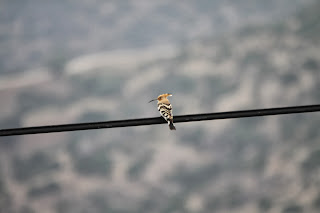 Other birds spotted this morning included Subalpine Warbler, Stonechat, Black Redstart,Corn Bunting, Serin, Meadow Pipit and Griffon Vulture. Mike also got a fantastic view of Spanish Imperial Eagle in the telescope before it launched off over the ridge.

After watching for lynx this morning without success John and Mike headed off for the day at La Lancha.Several Red-billed Choughs flew low over the dam wall calling as they performed aerobatic manoeuvres. Grey Wagtail, Cormorant and Great Crested Grebe were also spotted below the wall while a large group of Griffon and Black Vultures were seen circling on the thermals on the nearby ridges. 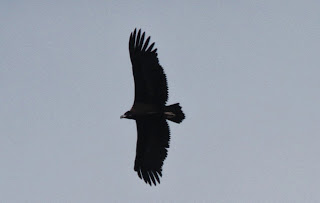 The second Spanish Imperial Eagle of this tour was spotted flying over the embalse giving a clear view of its diagnostic white leading edge to the wing.Crag Martins were sweeping over the dam wall and scaling the cliffs above where numerous Rock Doves could be seen. Optimism grew after talking to a couple from England who had seen lynx that morning as it crossed the mountain road in front of their car. A visit to the bat caves was exciting with Greater Mouse-eared Bat and Schreiber's Bat found hanging in the crevices along with Whiskered Bat. Several Iberian Water Frogs were to be found in the pools near the cave entrance. 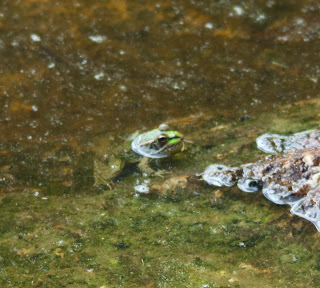 This evening the watch was at a different site, by the Jandular river where John and Mike were rewarded with fantastic sights of Eurasian Otter fishing in front of them. Spanish Terrapins soaked up the warmth on the rocks at the edge of this river, whilst Cetti's Warbler and Soprano Pipistrelle Bats flew overhead.Two Kingfishers afforded great views plus several Red Deer, their splendid colours reflecting the fiery sunset of this beautiful atmospheric setting. 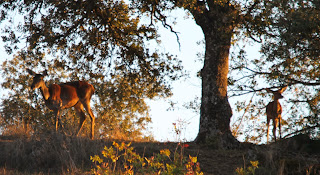 Still no lynx...but a night memorable in its peace and beauty.


The morning watch at La Lancha started in mist but it soon cleared to enable sights of Sardinian Warbler, Song Thrush, Blackbird, Griffon Vulture and Goshawk. A lot more rabbits were noticed this morning. Azure-winged Magpies and Iberian Green Woodpeckers could be heard calling as they flew around the copses with Magpies and Jays feeding on the valley floor.The lynx was still to prove elusive but a wonderful compensation was the incredible view of three Spanish Ibex only 30 metres away! John and Mike watched as they moved along the hillside with fleet-footed agility.Three Blackcaps could be seen in the holm oaks,along with Sardinian Warbler.  The road along to Los Escoriales runs through the ranch where for generations the owners have bred the traditional Spanish fighting bulls. 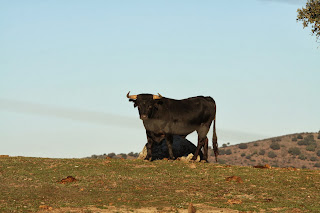 Some good news now is that with a new generation of owners the animals are only being bred to preserve this historic breed and are thankfully are no longer sent to the bull rings of Southern Spain. The time spent here also proved fruitful with good views of Golden Eagle, Black and Griffon Vultures, Crested Larks, Spotless Starlings, Corn Buntings and Great Spotted Woodpecker.  It was good to spend some time watching the Griffon Vultures squatting on the ground, opening up their huge wings to catch the sun. Near the hotel, a Ladder Snake was spotted also soaking up the warm rays and Iberian Wall Lizards were out in good numbers too.


The fantastic sunset at La Lancha during the 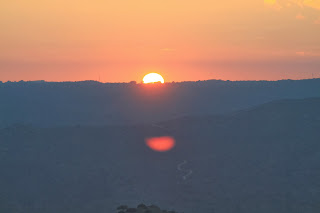 evening's watch helped assuage the slight sense of desperation as  there was still no lynx sighting although the views of Black Redstart, Chaffinch, Azure-winged Magpie, Jay, Magpie, Common Buzzard and Red Deer Stags in rut were greatly enjoyed.


This morning again started off a little misty, but it cleared to produce another nice day.John and Mike watched Robin, Blackcap, Sardinian Warbler, Red-legged Partridge, Kestrel, Common Buzzard, Griffon and Black Vulture, Great Tit,Azure-winged Magpie, Magpie,Jay and Chiff-chaff at La Lancha when the alarm was raised by the calling of the Magpies in a gully below.The thick vegetation hampered any clear view but the presence of lynx was very likely.

After the morning's watch John and Mike returned to the dam site and located a single Spanish Ibex up on the crags above the river with several Griffon and Black Vultures perched on the surrounding ridges.  Red-billed Chough, Cormorant and Great Crested Grebe were also there on the embalse.  Further up to the north of the park,when visiting the  Sanctuario  Virgen de la Cabeza with its panoramic views of the natural park, a Golden Eagle could be spotted soaring over this impressive landmark. 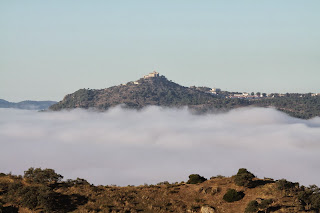 The evening watch at La Lancha still did not produce any sight of the Iberian Lynx but everyone was cheered by the lovely home cooked meal in the company of other hopeful watchers.


The last try  for Iberian Lynx of this tour ...and it turned up trumps with good views of over 15 minutes at a time of our target ...the Iberian Lynx!

John and Mike had been alerted by the alarm calling of Magpies in the gully below their watch-point.  Scanning with his binoculars, John focused on a movement and then slowly moving out of cover up the hillside was an Iberian Lynx! 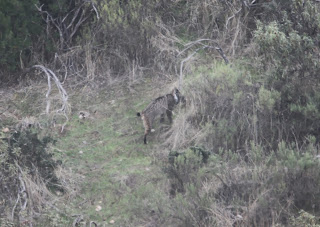 This animal was the first we had seen in the Sierra de Andujar wearing a radio collar.  Mike was able to get good views through the telescope on this rare feline as it reached the track and then slowly and nonchalantly strolled along the track for over 100 metres. All the patience and perserverance of the last few days had come to a fitting climax with this rewarding view of one of the world's rarest and most endangered cats often referred to as the phantom of the Sierras. 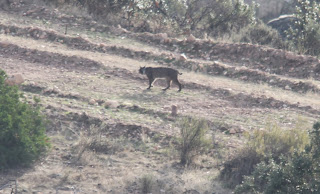 After packing up and saying goodbye to Roland and Mercedes, thanking them for their excellent hospitality, John and Mike headed back to Madrid. On the way large numbers of Spotless Starlings, Cattle Egrets, Red Kites and Common Buzzards were all enjoyed, but there was no doubting the main topic of conversation...that wonderful climax to an eventful trip; that Iberian Lynx.

Posted by Wild Wolf Experience at 10:04 No comments: