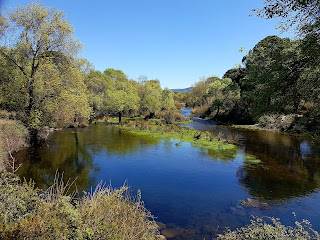 The first days of April saw John in the Sierra de Andujar with John, Janet, Frank and Andrew, looking for Iberian lynx. A paucity of rabbits meant that lynx had not been seen for several weeks and the possible sighting that John had was but fleeting, but as keen birders and naturalists, there was never any moment or watch without its excitement. 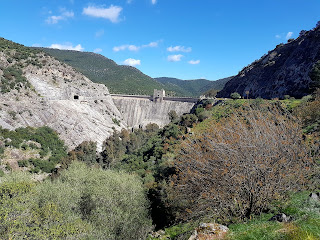 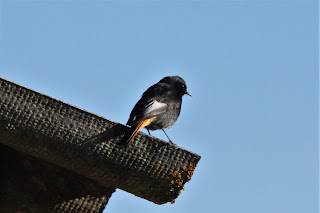 So much was spotted during the tour that I am grateful to John and Janet for allowing me to reproduce their list, rather than write all these down.

It was a pleasure for John to be with John and Janet again who had enjoyed a successful Watching for Wolves tour with us in 2016 and along with Frank and Andrew, the group boasted some depth of knowledge.

At one point during a watch at the dam, two short-toed eagles, three black storks and a Spanish ibex could be seen in one view! 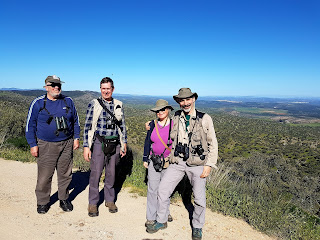 The weather was excellent throughout and afforded everyone fantastic views of Imperial eagle from the first night.

Watches were often accompanied by Dartford and Sardinian warblers  with goshawk, black vulture, red-rumped swallow, hoopoe and a daily little owl showing well throughout the tour. A false alarm from Andrew did not produce the hoped-for lynx sighting but everyone got onto red deer because of this.

Wild boar were spotted on two days of the tour with this family party providing particularly pleasing views. 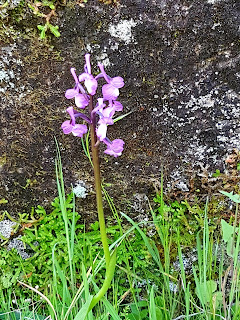 This is the best time of year to be here to experience the orchids and wild flower meadows.

On the last day there were good views of mouflon. 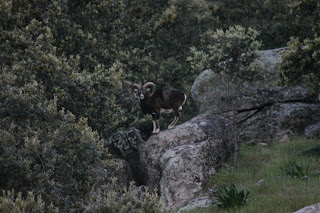 A fabulous ocellated lizard made its way across the road in front of everyone one evening in the glorious Sierra de Andujar.

The day after the Looking for Lynx tour John collected Story and her mum Ruth who had flown in from the USA solely for a Watching for Wolves tour. Once again John enjoyed the company of dedicated and knowledgeable enthusiasts.  Ruth and Story's Watching for Wolves tour sightings started straightaway with a black vulture above them on the road out of Madrid.

A stop off at Villafafila meant that John, Ruth and Story were treated to approximately 150 great bustards, some in full lekking mode, with red kite, raven and a superb booted eagle atop a dovecote, plus lesser kestrel at Otero de Sariego .Cormorant and otter were seen at the Rio Esla.


Ruth and Story's first wolf watch on the evening of 4th April was interesting with red and roe deer able to be watched clearly through the telescopes. The next morning Ruth, Story and John were excited by the skittish behaviour of the many red deer, as these creatures often serve as a barometer for wolf presence.  The deer were rushing around in a type of panic which later subsided with a few left to play fight. Roe deer came into view plus good clear views of coal tit and two red kites. Ruth and Story found some excellent  wolf, deer, wild boar and badger tracks during their tracking that day plus fresh wolf scat, and a highlight of the day was a stunning sub-adult golden eagle flying just above them,carrying unidentified prey, along the Boya/Cional road.

The evening wolf-watch of 5th April began with a perky red fox popping up and down, in sight then out of sight, plus stags and roe deer and Story located a party of five wild boar in the decreasing evening light so we shared that view until darkness stopped our searching. Earlier that evening Ruth had also been fascinated by her find of several pine processionary moth caterpillars moving together in their line along the track looking extremely snake-like as is the intention.

There were two foxes at the viewing site the next morning and plenty of red deer plus some roe deer. One red deer could be identified several times during the tour because at that stage it had only lost one antler.

The date of Friday April 7th 2017 will remain highlighted in Ruth and Story's calendar as the day of their first Iberian wolf.But not just one, rather three individuals over the course of this day's wolf watches. At first, everyone at the morning watch was concentrating on a very large wild boar with its persistent foraging for food but John spotted a large wolf inside the wood.  A short stand-off occurred between the wild boar and the wolf before the wild boar went on its way and the wolf moved off to the right.
During the evening watch  another wolf, probably a female, was spotted in the heather fairly close to our watching site as it trotted in beautiful evening sunlight resolutely towards the edge of the wood. The heather there was low and we could all watch its progress through the vegetation, up onto the track and eventually to disappear into the darker depths of the trees. Relaxed smiles were on everyone's faces but our sightings for that night were not finished yet! Not long after this sighting we were all watching the large form of the dark male wolf in the gloom of the pine wood as it moved in measured steady pace between the tree. What a day!

In between these amazing wolf encounters John, Story and Ruth had enjoyed a fabulous trip to the Douro Gorge where they watched a spectacular display of a golden eagle mobbing a griffon vulture, tumbling down into the gorge only to regain aerial composure and return to the horizon to display to an interested female. 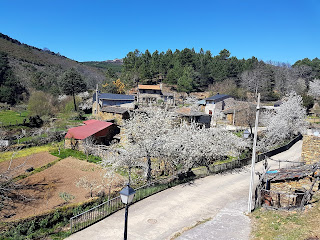 Ruth and Story were able to photograph a large, ocellated lizard and some Iberian water frogs plus black kite during explorations in the Gallegos area and then they moved on to enjoy the very pretty villages with fruit trees in full bloom. A most interesting walk behind these seemingly calm hamlets meant a hissing encounter for John, Ruth and Story with a Lataste's viper!

Ruth wrote the following testimonial about their Watching for Wolves tour and we are happy that our work here can elicit such good feelings and memories. 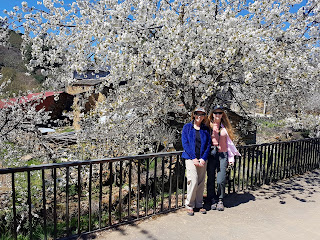 "For anyone who longs to really get away to experience nature, exotic wildlife and birds, culture at its oldest and finest, and some of the nicest people in the world, this is the trip to take. My daughter and I were treated to a custom exploration of the land of wolves in Spain, with morning and evening “stakeouts” to try to view wolves, and afternoon adventures to neighboring villages and Portugal. We did see wolves! And we met the local rangers, and learned much about how the Iberian wolf survives alongside humans and livestock in Northern Spain.  The sights were beautiful everywhere we went.  We have never seen so many enormous birds: Bustards, golden eagles, Egyptian vultures, white storks and more.  John is an expert birder and naturalist. The local people are welcoming, happy, and loud! The Remesal Hotel where we stayed was just lovely, and breakfast and dinner were delicious local foods.  John and Margaret are the best hosts ever, and we miss them already."

During Easter week John and I went to Zamora to watch the film Cantabrico which is lauded as a " deep look into the hidden secrets of a wonderful place of the world." It demonstrates the beauty in all seasons of the Iberian peninsula and its variety of wildlife, with some particularly harrowing but mesmerizing footage of a pack of Iberian wolves bringing down a feisty stag. 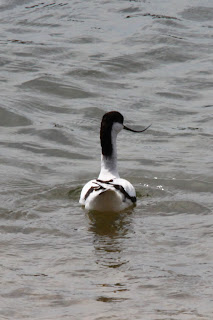 At this time too John spotted a first for us in this area; an avocet wading and swimming in the lake at Cional.

The 20/23rd April saw the International Congress on " Wolf Management and Conservation in North America and Europe; An Unresolved Conflict." hosted at Puebla de Sanabria and John attended the whole congress.  He felt privileged to be the guide chosen to take Dr. David Mech amongst  others out on a wolf watch on the morning of Saturday 22nd April. The course was well attended and different viewpoints were aired and discussed in a constructive atmosphere.  As well as David Mech, there was an impressive field of speakers from around the globe and space limits me as I highlight only a few ; Dr Shannon Barber-Meyer, ( USA), Dr. Djuro Huber, ( Croatia), Dr. Juan Carlos Blanco Gutierrez (Spain),  Dr. Andrea Amici (Italy),Dr. Francisco Petrucci-Fonsecca ( Portugal) and Dr. Jose Angel Arranz Sanz (Spain).

Another busy month and I have enjoyed sharing these experiences with you here. Already as I publish this, John is experiencing great success with our Browsing for Bears tours in Asturias and I shall be highlighting some of the fantastic videos and photos from these tours in the next newsletter....already looking forward to it! 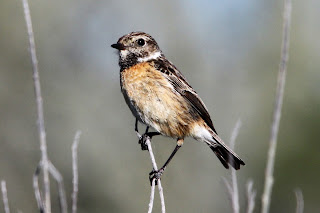 Posted by Wild Wolf Experience at 07:15 No comments: