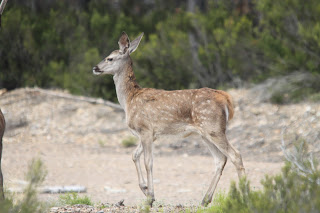 August is fiesta time in the villages of Sierra de la Culebra where previously empty houses become once again family homes as all generations enjoy meeting old friends and celebrating together in each village's individual fashion. 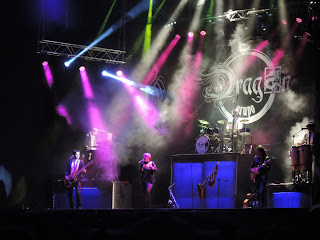 It was also the month of the Festival Territorio Lobo which was a success and the very interesting programme is detailed below. 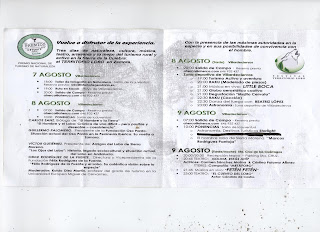 During much of the festival John and Dave were busy in Somiedo looking for bears ( more details further into this Newsletter),  but we were able to be joined on the evening of 8th August by many people from the festival, when Dave got onto 4 wolves coming out of the forest .  We watched, and were happy to share with all the people, the sight of these wolves mouthing and playing before separating; one wolf to the left and then moving with intent into deeper heather, and the other three disappearing amongst the dark pines. 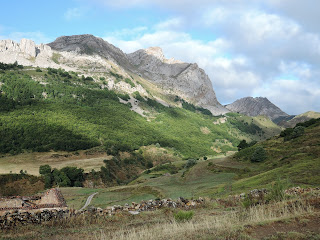 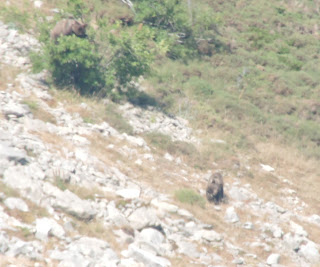 Certainly Saturday 8th August was a successful day for Dave, as he spent the morning in Somiedo watching 5 bears, then arrived back in Sierra de la Culebra in time to find 4 wolves, after spotting a viperine snake swimming in a water tank during an afternoon stroll! What a productive day!


The earlier part of Dave's tour in Somiedo was hampered by poor visibility, but John and Dave persisted and were treated to good views of the elegant chamois plus a stoat on their first watch on 6th August.

Red-backed shrike was a notable bird during watches and walks in difficult misty weather, but the highlight of this Bear tour was the final morning of Saturday 8th August when the thick mist lifted as John and Dave resolutely set up at their viewpoint, to be rewarded by fantastic views of five individual bears. 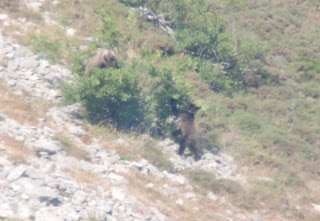 A mother and her two cubs were feeding and climbing trees and another two were also to be seen inspecting the Alpine buckthorn crop on the other side of the valley. A golden eagle could be seen displaying its golden ball dive before resting on a rock and a large flock of upwards of thirty red-billed chough flew across the valley uttering their charismatic call while giving an impressive aerobatic display.  Another bird seen during the bear tour was Egyptian vulture.

Previous to this Saturday 8th August with its excellent combination of wolf and bear on the same day, Dave had enjoyed a tantalizingly fleeting glimpse of a wolf at 21:30 on Wednesday 5th August, which, although only a short episode, managed to give Dave some appreciation of the size and power of this apex predator and served to whet his appetite for future views. 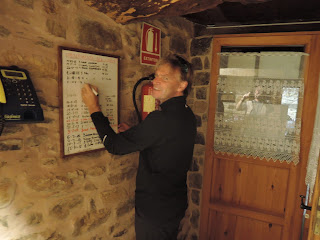 Certainly Dave showed admirable determination during all wolf and bear watches, never relaxing his view and intent on scouring every minute of available time; an attitude which reaped its rewards with Dave's wonderful sightings of both species during his week with us. 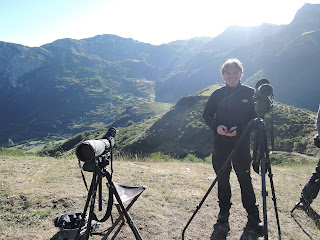 Interesting bird sightings for Dave in Sierra de la Culebra started on the road from Madrid with a clear view of a griffon vulture and there were many more of these for Dave to spot during the day trip to the Douro Gorge where John and Dave were delighted to see the young Egyptian vulture roosting. 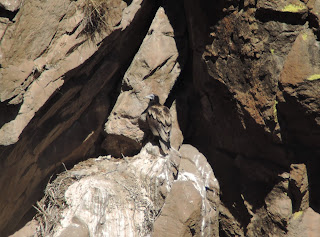 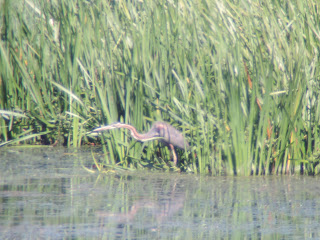 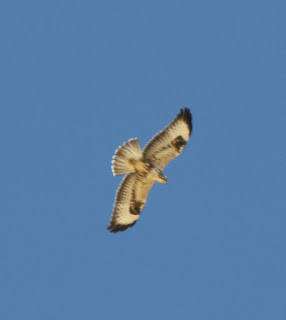 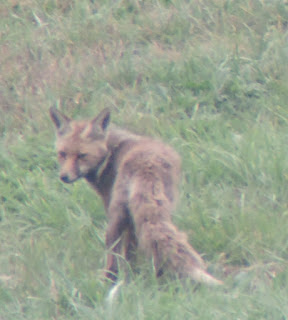 
Dave and John saw wild boar on several occasions during these tours including one time on Wednesday 5th August when Dave must have been standing very still to watch two wild boar because he looked down to see an inquisitive dunnock at his feet! The next morning the total wild boar count was seven and Dave's early return to Madrid airport (02:00!!) on Monday 10th August afforded John and Dave a lovely view of a hedgehog by the hotel and a large wild boar at Boya.

Our next clients for a Watching for Wolf Tour were Jim and Jayne who loved the tranquility of the village and enjoyed a good view of serin early on in their walks around the gardens and plots which are so rich in bird-life. However ...lucky or what?..the highlight of the day was to be the fantastic sight at 21:00 of four wolves arriving onto the firebreak- from where?- and travelling up over the rise. Later in the same evening, we were able to watch a fine dog fox for quite some time but that could not compete with the thrill and excitement engendered by those four wolves and on Jim and Jayne's first day! 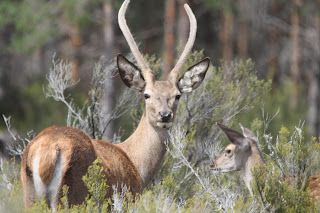 After this peak was reached early on in the tour, Jim and Jayne scoured from a couple of promising viewpoints and were able to admire plenty of red deer beginning to rid their antlers of the velvet covering by butting and rubbing against any tree which happened to be available. The night of 15th August gave us good views of two large wild boar grazing in dry, yellowing grassland - a perfect backdrop to enable us to see these shy creatures clearly.The evening finished with a nightjar flying up in front of the vehicle. 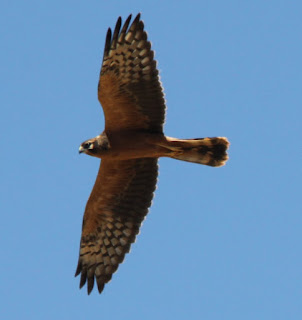 On 16th August John spotted goshawk and he was delighted to see four peregrine falcons on the morning of 27th August along with hen harrier.  The same week John also noted two black storks in flight over the moors.

During two watches near the end of August, John was able to show Tim a view of wild boar from a distance on the first evening of Friday 28th August and then on the following night, a very large strong wild boar, probably weighing in at circa 80 kilos, feeding not far from their view, plus the interesting sight of a large red deer stag rolling in the low heather. We all know about that itch on the back that is impossible to reach! The same atmospheric night, John and Tim listened to a nearby pack of wolves howl...and under a full moon too!  This barn owl was out hunting in the moonlight as John returned from one of those "goosebumps" wolf-watch evenings.
.

Earlier that day the weather had been atrocious with thunderstorms, lightning and the rest, but poor weather conditions did not stop John from videoing two out of the three wolves seen that morning. .

The first video shows a large male wolf racing across the field while the smaller wolf in the second video is distracted by the second of two cars passing by closely. Perhaps the second car encounter is responsible for the deviation of this wolf from the straight line run by the first, larger wolf a few seconds before. 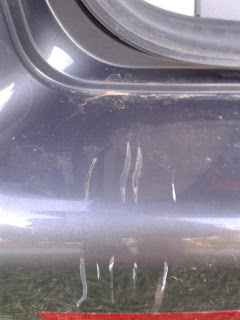 Continuing with this theme of our Spanish predators and cars, I attach this photograph sent to us by friends Nuria and Xavi who had been conscious of some disturbance outside their campervan while parked in Somiedo earlier this month.  When getting out the next morning they discovered these bear claw marks etched into the side of their pristine van, which has been used to carry beehives and honey in the past. This could have been a little too much of a close encounter and I am sure their insurance claim will cause some interest!


"We just wanted to say a very big thank you to you both we really enjoyed our time with you . We loved the wolf watching and felt very lucky to have seen all the wildlife that we saw, we also enjoyed meeting all your spanish friends and the lovely people   you introduced us to at the bars and restaurants where we had our lunches. It was a perfect few days ending to a fab holiday . We will keep up with activities via your blog and e mail. Once again thanks a lot we thoroughly enjoyed it." Jim & Jayne. 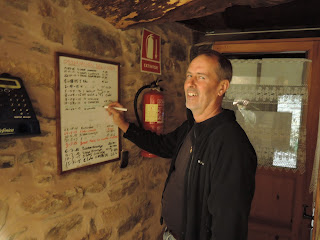 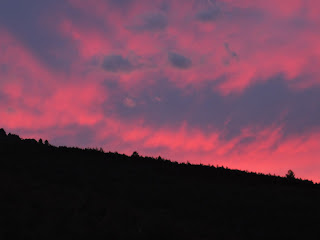 Margaret    ( All photos and videos taken by John during August 2015,with the exception of the bear claw photo,taken by Nuria and Xavi.)
Posted by Wild Wolf Experience at 03:34