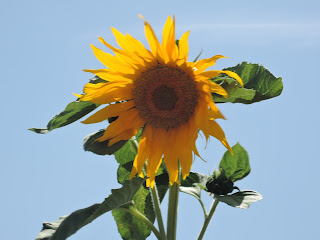 July has been an incredibly hot month even up here in the mountains. We could not match the temperatures of the Costas or Madrid which were in the 40's but an afternoon reading of 37'C has been recorded here on several occasions this month. 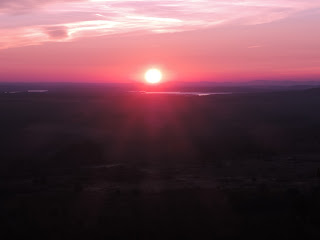 The only rain was during an impressive thunder and lightning storm on the night of 30th July and certainly it would be realistic to assume that the wolves would be lying up in the heat like us humans. This made us all the more surprised to encounter a wolf crossing the road ahead of our car at 13:30 in searing temperatures on 9th July.

However this was not our first wolf sighting of the month.  Our first July wolf was wonderful, set in rich evening sunlight on 6th July.  Peter and Lynda were by now well into their second day of their tour and on the previous day they had already added photographs of very fresh wolf scat to their holiday snaps.  Despite very dry conditions with pathways caked hard and thereby not giving up much information, John, Peter and|Lynda found some very good wolf tracks.  So it was with keen eyes that we all scoured from the viewpoint on the evening of 6th July and tension rose when Peter was sure he had seen a wolf to our right, describing his sighting perfectly. 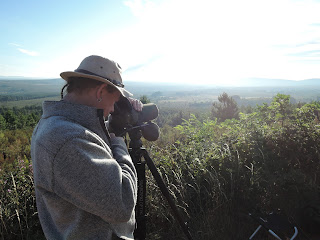 Our scopes were concentrated in that direction and sure enough, Lynda drew our attention to not one, but now two, wolves.  We watched as the large dark male and one smaller wolf loped and paused, with tongues lolling in the heat,These were good, clear views as no vegetation was hampering our sight and we were justifiably delighted! 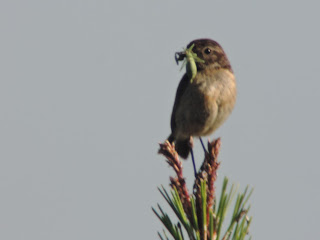 A delightful finale to a full day for Peter and Lynda was this delightful little owl caught on camera on our way to the local bar. Another memorable encounter occurred when Lynda decided to investigate a hole in the ground,luckily with a stick rather than her fingers, as the hole and the web belonged to a wolf spider, one of the four venomous spiders in Spain, who was not amused at being disturbed, and who proceeded to vent its fury on the obtrusive stick.

At intervals throughout this month three or four wolves have been seen hunting in the evening, on 9th, 16th, 23rd to be more specific, but no cubs were visible although recent tracks of one adult wolf plus cub tracks had been seen in sandy conditions. On the morning of 19th, John was delighted to spot three cubs at a distance along with three foxes and a short-toed eagle on the same watch.  That evening two separate wolves were seen at 22:30 and howling was later heard


This,combined with recent sightings by friend and fellow wolf-watcher Roberto on the morning of 28th July of three cubs within a different pack territory, indicates a successful breeding season here. This wonderful video taken by Roberto and reproduced here with his kind permission, shows the first view of these cubs.

Whilst watching a goshawk flying over the moors near to our village,John also captured on video these charming red deer with fawns.


A novel encounter for John was with a yellow-necked mouse whilst waiting silently for larger mammal sightings. Re larger mammals, this month has been good for views of wild boar including this interesting episode with two youngsters sparring.


Although Stephen's timetable only permitted a short time here in the Sierra de la Culebra, his day being guided by John on 31st July was full indeed, starting with good wild boar views plus a fleeting pine marten and the presence of several black and griffon vultures during the morning watch.  Heavy rain from the previous night's thunderstorms meant that it was not easy to find wolf tracks, but John located some, plus very fresh wolf scat. Stephen was also pleased to observe short-toed eagle, bee-eater, Montague's harrier and  hen harrier as well as Iberian water frog and a very large oscillated lizard.

Some orphaned young goldfinches are proving demanding in their instinct for food,but hopefully this action has saved these two fledglings from otherwise certain death. 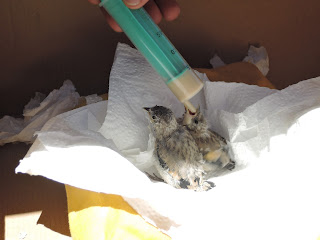 The over-riding theme this month has been the care of the adult creatures as they prepare their offspring for the world outside. We have been treated to some fabulous sights of young creatures tripping, fighting, playing...just full of a vibrant enjoyment of being alive; I defy anyone to watch such episodes of pure joy and energy without a smile reaching their lips! 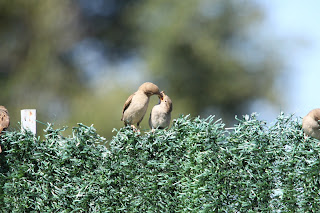 Even on our own garden fence is the cycle of life played out, as demanding youngsters are cared for by increasingly harassed adults. A scenario which I suspect may strike a familiar chord with some of you?

(All photos and videos taken by John during July 2015 with the exception of the video from Roberto.)

Posted by Wild Wolf Experience at 03:40