Watching for Wolves/Browsing for Bears Tour.

sub titled:- Peter and the Wolf(ves)

A Wild Wolf Experience Wolf/Bear Tour  was part of quite a European trip for Peter and Rosemarie,driving to Sierra de la Culebra from Frankfurt via Bordeaux. A stormy drive through Southern France had led into more settled weather and both Peter and Rosemarie were ready to relax over a beer or coffee as we met in Villardeciervos. 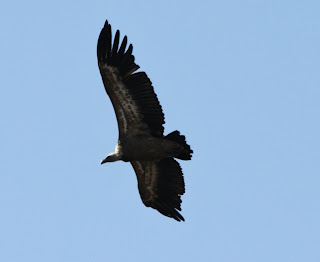 After settling into our hotel in San Pedro, we set off for the first wolf watch of the tour; La Pista had been the most reliable source this season, and so this is where we went. There was a bit of a heat haze, but the presence of a Black Vulture on a rock near the firebreak, and several Griffon Vultures either in flight or congregating in this area raised our  expectations still further.  The sky was looking stormy now and there were thunderclaps and lightning flashes from about 20:00 onwards, with the end of the rainbow signifying a pot of gold at Mombuey?! By 20:20 we were able to watch, and listen in awe to, Red Deer stags as they roared their rut through the valley  and we were delighted by a family of Wild Boar, seen clearly within our scopes. Not long after this treat, John got us onto a Wolf by this year's den site, to be followed by 2 cubs clearly identifiable by their playful body language.So, on our first evening, about 20 Red Deer, 2 Roe Deer, Wild Boar, Black and Griffon Vulture..and 3 Wolves! 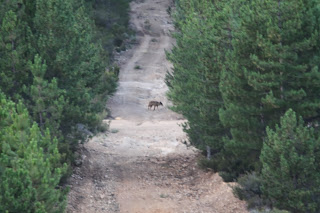 This wonderful first wolf watch set quite a benchmark for the rest of Peter and Rosemarie's time in Culebra,but in general the watches even excelled this promising start. The following morning,Sunday 8th September,we were able to watch 5 Wolves playing on sunlit rocks for hours,whilst the Griffon and Black Vultures still waited around, looking morose and ungainly in this morning's superb sunshine. They had been joined by Ravens and we saw Rufous-tailed Rock Thrush near to our watch.

Monday 9th September's morning watch was uneventful wolf-wise, but repeated the Rock Thrush views, both an adult and a juvenile,plus Wild Boar and stags and hinds in tip-top condition.However,a Wolf returned to our scopes at 08:30 on Tuesday morning 10th September;  at first only John saw this, but a short time later Peter alerted us to another individual sighting and we were soon treated to 1/4 hour of 3 young Wolves playing only 200 metres in front of us.  We also saw Short-toed Eagle. 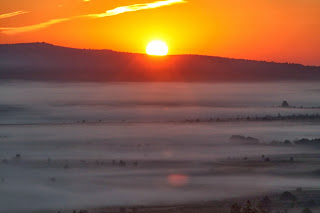 The evening watches were truly atmospheric with their stunning sunsets sinking behind the mountains of Sanabria,which were keeping their secret of the encroaching bear population. We saw Wolf at 20:30 on Sunday 8th by the close-cut fields at the top of the hill, and at 20:15 on Tuesday 10th,in good visibility and with 3 Black and 13 Griffon Vultures plus Ravens hanging around, 2 Wolves ran in front of them as 2 Roe Deer raced away through the heather. Earlier that evening we had enjoyed watching good long views of 3 Wild Boar in the light-coloured grass at 20:00, but this wolf sighting outranked that! The evening watch at Boya on Monday 9th September was a quiet one, following up the tracks and wolf-scat we had found there during our foray on Sunday. But Rosemarie returned with a hefty bag of large pine cones,so it was constructive in one sense! 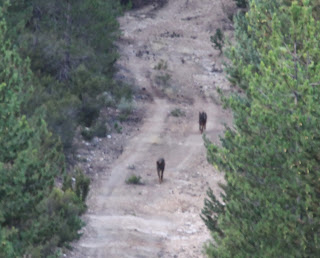 The final watch of the wolf part of the tour was certainly an impressive finale and one which prompted Peter to exclaim,  "This place is better than Yellowstone for wolves!"  The evening watch on Tuesday 10th September started peacefully enough, giving us time to appreciate the purple heather,interspersed with dashes of violet,blue and yellow;  a true artist's palette of colours in this evening sunshine. The vultures by now were gorging and squabbling over something in the dry grass, when Peter whispered "Wolf!"and 2 Wolves were first crossing the track before coming straight toward us;  they then went unhurriedly into the wood bordering this firebreak track. As the lightening started to flash, a huge stag stood transfixed, a 16-pointer at least,silhoutted in the lightening flashes as we drove off, lifting a couple of Nightjars in our headlights. We felt fully satisfied with our excellent 5 sightings from 7 watches.  What could top that? Well, only Antonio's paella, and when we returned for dinner...paella it was! 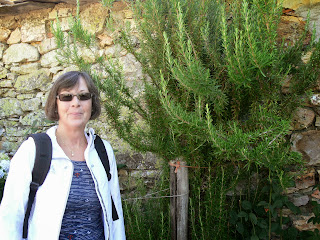 The walk around the tranquil village of San Pedro on Sunday 8th September had meaning both for Rosemarie, who found her namesake in a large rosemary bush,only to be matched by Peter, who felt rather proud to be in Calle la San Pedro.We enjoyed scouting out the wild boar trails in the lichen-encrusted oak wood by the cemetery and we admired both the cultivated harvests of ripening apple-trees requiring support as their fruit grew heavy, and the natural harvest of burgeoning sweet-chestnut trees. 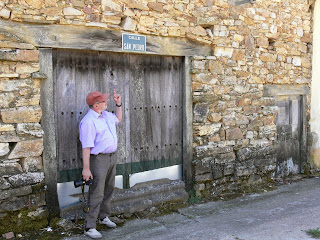 As well as discovering the wolf scat and tracks at Boya, we also found some wolf-scat by the tree nursery.After watching 3 Iberian Water Frogs in the pond at Villardeciervos Roman Road, an excellent lunch was enjoyed at Otra Cosa with local beef, peppers and tomatoes.

We were shocked at Aldeia Nova to discover that a strong fire had caused devastation on both sides of the gorge,and it was still smouldering. We stared at this beauty spot laid bare and black by the ravages of the recent fire.  We were only there 10 days ago ( see trip report Wolf/Bear August 2013).The little white church stood out even more now against the charred background.

However, at Fariza, we had a very close view of a Golden Eagle, plus excellent views of about 16/20 Griffon Vultures and Black and Red Kites...not to mention the wonderful pottery shop at Moveros, always a treat. 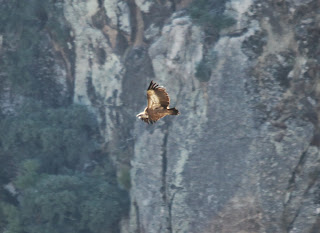 Our walk around the fascinating village of Flechas was relaxing and enjoyable, to be followed by a thoroughly entertaining time with Margerita at the traditional village of Riomanzanas. This feisty lady enjoyed showing Peter and Rosemarie her produce, her traditional way of life. the facility of the village swimming pool, and we were left in no doubt as to how to handle an angry,spitting cat!!Dinner that evening was a lively affair as we enjoyed the lovely home cooking from Antonio and we recalled both the fun events of today, and also the fact that we had been witness to a part of living history...to a life lived closer to nature than any self-suffiency course in our native countries could offer...and to a life which will in all probability be defunct within another generation. 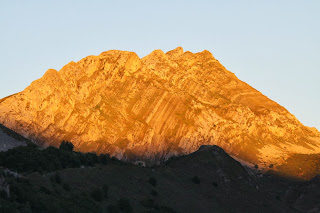 Somiedo was beginning to hint at its autumn beauty as the leaves were showing signs of changing hue.  The Alpine Buckthorn was ripe and ready for picking as Peter and Rosemarie were treated to excellent lengthy views of 3 different individual Cantabrian Brown Bears during their morning and evening watches during 11th/14th September. 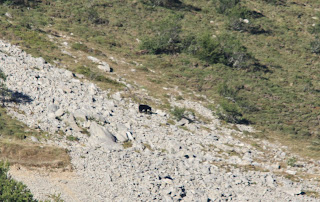 These views started with a large  bear in the valley to the left of La Peral and Peter, Rosemarie and John could watch in the excellent sunlight as this magnificent creature scrambled across the scree.  They also counted at least 20 Chamois, and Red-billed Chough were notable amongst the birds spotted on this first day. Each day brought good bear sightings in the bright, clear conditions, with the best watch probably being on Friday September 13th...certainly not an unlucky date here!...as a different large Cantabrian Brown bear crossed the scree on the right hand side of La Peral , moving with determined stride then stopping to demolish some buckthorn branches en route. This wonderful opportunity lasted for nearly 2 hours, with close sightings of several Chamois and a Red Deer to boot. 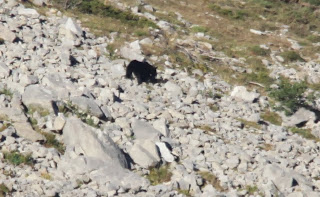 Indeed we were thankful for the excellent quality of clear light here in Somiedo;  not always a feature in this mountainous micro-climate! Such nigh perfect conditions meant that the view from Perluna with griffon vultures checking out Peter, Rosemarie and John at pretty close quarters, was seen to full advantage and the drive to Villar de Vildas was enjoyed immensely. 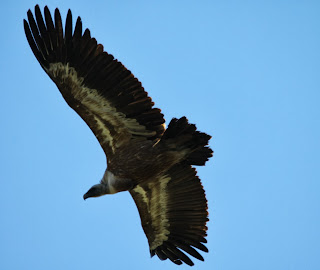 The locals in this traditional working village welcome interested visitors and Peter and Rosemarie enjoyed buying some wooden spoons made by the village carpenter.  They also enjoyed a good lunch as Peter made friends with the most important regular at the bar.

On Saturday September 14th, still on a high from the "Friday 13th Bear-watch", the lucky trio of Peter, Rosemarie and John enjoyed watching yet another individual bear until breakfast, after which they left the mountains of Somiedo for the flatter terrain of Villfafila, arriving in time to look around the information centre, then off to the Observaciones des Aves where several Great Bustards were spotted.The lack of water limited a number of species, but they had good views of Marsh and Montague's Harrier, Rock Sparrow, Crested Lark, Wheatear,Common Buzzard and Lesser Kestrel.

It was still sunny and clear when Peter and Rosemarie got back to their car which had been parked at San Pedro for the duration of their Wolf/Bear tour.  They set off in good spiirts for Santiago, the next stop on their Spanish sojourn,having satisfied an ambition to see both Bear and Wolf, in the stunning surroundings of their wild European habitat. 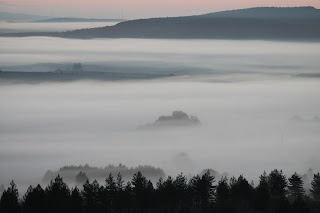 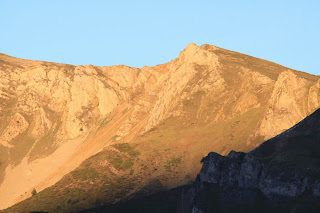 
"It was a really great time. Thanks for everything!"