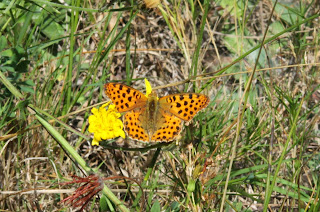 Carren, Jean,Irene and Anne are four ladies who were determined to give 100% when looking for wolves whilst also devoting the same amount to having a jolly good time together. They arrived full of praise for the John Lennon Airport at Liverpool and also very happy with the Easyjet team who had flown them into Madrid. They met John and arrived at the hotel in  good time to settle in to their rooms and enjoy their first evening meal here. As bed-time approached, we had the unusual sight of the normally inscrutable Antonio senior being asked to fill Anne's hot water bottle, (ambient temperature 21'C) which was lovingly ensconced in a furry cover.  Such a device Antonio had never met before, but he was ready each night after that to fill Anne's "hot rabbit" to the brim! 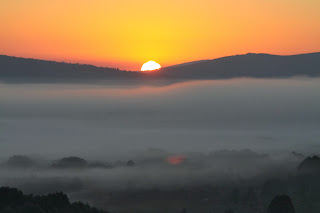 Early morning mist, although beautiful, did limit viewing possibilities in the first half of the tour.  The stag rut was getting to a climax however, and every watch brought stunning views of these proud creatures, with their roars and barks resounding through the valleys even when mist impeded good views. On the first evening watch, 18th September, we were excited to locate the source of so much vulture interest. We watched at 20:00, several GriffonVultures and a Raven feeding,until the Black Vultures came in to get rid of the rest. The full moon became easily visible by 20:15 in an almost violet sky as we watched these birds, so graceful in flight yet so ungainly on land, to the background of roaring stags. At 20:45  seven Wild Boar were grazing in the light grass and 5 minutes later two more Wild Boar ran across the track.  Nightjars and crickets had begun their evening wall of sound as the diminishing light meant that we had to leave this scenario. 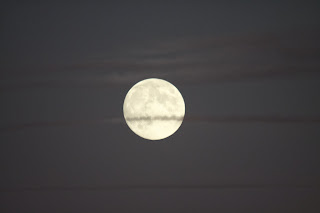 The next morning (Thursday 19th September) Wolf was seen fleetingly but we couldn't all get onto it. Irene pointed out Wild Boar to us all. plus a beautiful Stag.By this evening, when our watch produced nothing bigger than an Iberian Hare, a little despondency was beginning to creep in, voiced at dinner by Carren's ironic toast to the "Spanish Buggerall".

Friday evening's watch changed all that negativity however.As we settled at la pista by 19:00 noting Crossbill on the wire and the inquisitive Dartford Warbler nearby, most of us managed a view of a solo Wolf moving intently across the fields on the horizon at 20:15.  As some of us were concentrating on four Wild Boar rooting about some distance away at 20:40, we were also delighted to see three young Wolves and two adults in playful mode on the distant hill fields. From that watch on, good views were more frequent, with an excellent opportunity beginning at 09:20 the next morning (21st September) to watch a pale-pelted adult Wolf interact with several Red Deer.  We were focused on the deer in the light grass when suddenly one deer went "Boyng" (Carren's words) and  three others were showing signs of being startled. No wonder, because a large Wolf came out onto the track!

The changing skies on both the morning and evening watches were something for us all to enjoy.

Up to the very last minute, on the last wolfwatch of the tour, everyone was watching as the deer performed this "pronging" action as if to demonstrate its fitness to any predator, while a Stag remained totally transfixed amongst running hinds. We watched as they were being chased by a Wolf and we all were able to follow this thrilling episode for some time.  We left la pista after this last wolfwatch of the tour in high spirits after several excellent views and glimpses into the natural life and behaviour of this apex predator, the Iberian Wolf. 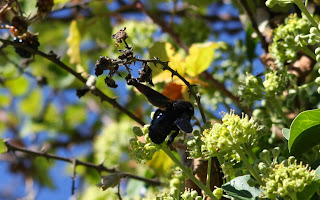 Of course, although watching for wolves is the main purpose of our time on tour, there is always much to do in between watches, and on the very first day we noted some fresh wolf scat positioned on top of some older foxscat at the crossroads of a path during a walk around our base village of San Pedro.  The portly bumblebees were busy on the ivy and blackberry bushes, along with a huge blue/black flying insect which Carren later identified, thanks to Irene's photographic skills, as a Violet Carpenter Bee, aka Mijas Bee.(xylocopa violacea). We could identify White Wagtail, Black Redstart, Stonechat, Rock Bunting much more readily and our searching in the skies led us to notice five GriffonVultures soaring around San Pedro...a number which increased to about seventy by the end of our walk.  Iberian Wall Lizard and Iberian Water Frog were seen, plus Clouded Yellow, Mountain Clouded Yellow and Rock Grayling butterflies. The blue, and occasionally the red, Grasshoppers were displaying their colours before our feet as we walked the paths around the village, noting  Red and Roe Deer tracks, and Carren attempted to handle a large Cricket until it bit her...which is probably what that Spanish person had been trying to tell her! 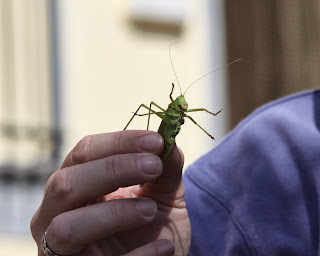 It being a Wednesday, the "Sausage and Cheese-with-a-little-bit-of-fruit-Man" was visiting the village and he was keen to regale us with tales of his sights on his travels around the byways in Sierra de la Culebra.  He was also very happy to share his produce with us and it meant that Jean was able to buy her holiday bananas: a bit of a tradition amongst these ladies I understand. 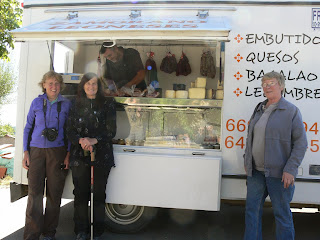 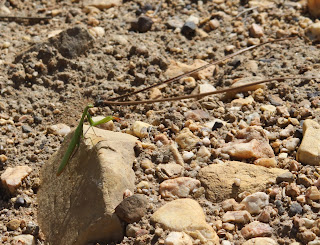 Later that day we did find a Praying Mantis at Boya and it was a pleasure to watch it watching us. In the same area we noticed wolf tracks in the sandy part of the firebreak going up the hill in a typically direct, straight line. Lunch at the Remesal that day was preceded by some wolfscat evidence along the Roman Road and some pretty close views of the Mastins there. Luckily for us they were intent upon relaxing in the forest shade away from the midday sun.


Carren, Jean, Irene and Anne loved visiting the traditional villages of Flechas and Riomanzanas, noting a young Stonechat, Black Redstart, Rock Bunting, Iberian Grey Shrike and Common Kestrel at the first village stop of Flechas where Anne climbed up the bell-tower to see if she would be eligible for the role of bell ringer, but soon realised she was about 30 years too young. Irene noticed the strong smell of recent Wild Boar activity during our walk behind the village, where we spotted Escher's Blue, Meadow Brown and Fritillary Butterflies. 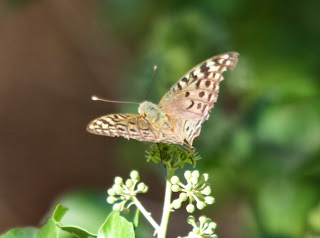 As we left Flechas for Riomanzanas, four Red-legged Partridges scuttled over the road. Soon after this we stopped to survey the vast area of uninhabited countryside from a lay-by viewpoint, appreciating the time to drink in the peace and quiet of this rural idyll.

Crossing the ford at Riomanzanas with Marguerita insisting we look at the village swimming pool facilities, we disturbed a Smooth Snake which subsequently swam across into some nearby reed. Marguerita was in mischievious mood and we all found the visit to Riomanzanas entertaining, although we kept a safe distance away from the river as our resident hostess seemed intent on making one of us find out about the swimming pool from closer quarters!

Returning to our hotel after a tasty plato combinato at Otra Cosa, we had more good views of Short-toed Eagle perched on a nearby telegraph pole. 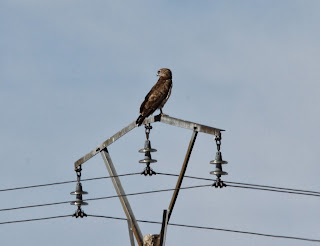 After spotting Griffon Vultures and Spotless Starlings en route, we spent quite some time looking at the variety of Iberian Water Frogs in the depleted pool at Codesal. This muddy area also gave us good evidence of Wild Boar wallowing sites.

The time spent in Portugal is always fun and as we set off to Alcanices we saw several Common Buzzards and Crested Lark,  before having a short stop to look at the pottery at Moveros.  Soon after this we had excellent views of two Griffon Vultures, plus Iberian Grey Shrike and Spotless Starlings.The sharp-eyed amongst us saw the Schreiber's Green Lizard as it streaked across the road, and soon after we almost had to perform an emergency stop to avoid an Iberian Wall Lizard. Looking at the scene of devastation after the huge fire on both sides of the gorge at Aldeiea Nova we saw Crag Martins, Jay and marveled at the ingenuity of the Wood Ants as they moved their nests. The residents of the village of Aldeiea Nova were happy to talk to us about their lifestyle, living totally from their produce, and even the 15 year old donkey played a major part;  eating the weeds, pulling the plough and fertilising the ground! 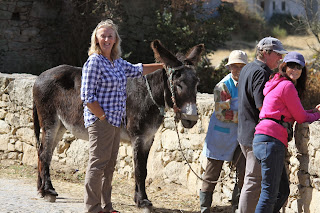 This donkey, like any valuable piece of equipment, was well cared for and appreciated. Everyone was able to watch the roosting Griffon Vultures through their scopes or binoculars and it was thrilling to look down on these magnificent masters of the air as they floated on to jostle ungainly for a resting place on the crags around Fariza.  We were also delighted to see Honey Buzzard, plus Crag Martin and Skipper butterfly. For some of us, the enduring memory of that visit will be Carren's exploding whale account,but hopefully, we will also remember our feelings when we were in a place where the beauty and atmosphere has remained constant  for centuries, watching the similarly unchanged daily ritual of these huge vultures, themselves relics of ages long ago. 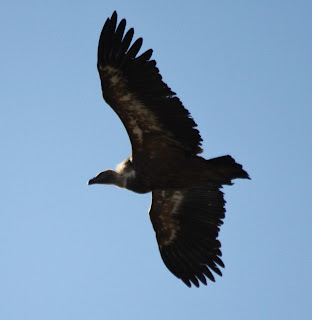 The return journey to Madrid airport was  topped with excellent Great Bustard, Marsh Harrier and Red Kite sightings at Villafafila, so all in all a glorious climax to this tour! 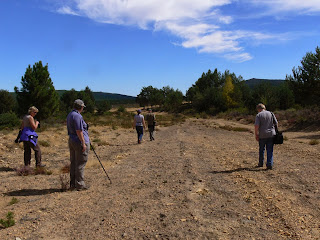 "Fantastic location,stunning scenery, great hotel,good food, excellent trips between wolf watches, very generous with your time and knowledge, small groups give an exclusive feel,good lunch stops,I enjoyed all the parts from local history and culture to bird-spotting...thanks again-it was a great holiday , and wolves!"
Carren.

"I loved the area...beautiful scenery,peace and tranquillity...loved the rustic hotel and the totally unspoilt village, also Antonio 1 and Antonio 2 who looked after us so well. As well as the wolves, it was lovely to the opportunity to see such a variety of other wildlife and birds in their native habitat, also fantastic sunrises and sunsets. Much enjoyed our trips out to other areas and being able to see the totally unspoilt rural villages of the area.Thanks again for all your time and effort to give us a good and varied holiday."
Jean.

Posted by Wild Wolf Experience at 08:54