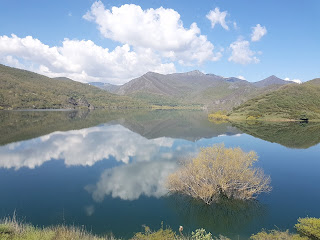 May has been a tremendous month for wildlife sightings and I know many of you have enjoyed John's Facebook postings this month in particular, beginning with super wolf views on the very first morning of May,

Early in May we welcomed Diana and Colin who had travelled the world and had many exciting adventures to tell us about, but had never seen wolf in the wild. All that was to change during their time with us in the Sierra de la Culebra when Diana, Colin and John were quietly watching red and roe deer on a Friday morning when first one wolf came into view, and then another, and another, in the heather and on the tracks; in total nine wolves were in view performing varying activities after a night's hunting. The heavily pregnant female  kept herself more distant from the rest of the pack and walked slowly down the track to the nearby river, possibly the last sighting of this alpha female before the birth of her cubs. The rest of the pack were busy sniffing, trotting and generally playing around between themselves before moving off into the deep vegetation to settle down for the day. This was a very special birthday present for Diana and made 11th May 2018 a day to be remembered for a very long time.

Previous to this fantastic sight Colin and Diana had become accustomed to using the telescopes and were enjoying picking out red and roe deer, red kite, Montague's harrier, sub-alpine warbler, several circling griffon vultures and a superb dog fox. A pine marten ran out in front of the Landrover on the way to the viewpoint; this was a special treat. Diana and Colin also enjoyed seeing the oil beetles which are numerous at this time of year, and they appreciated being able to watch the white storks on their nests so close to their room. 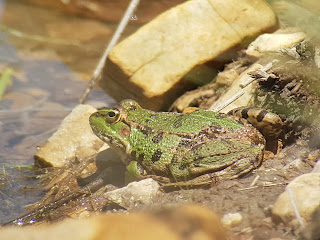 During the daytime activities, plenty of wolf scat and several tracks were found, including badger tracks, and everyone liked the Iberian water frogs, some of which seemed quite content to pose at the water's edge rather than hop into the muddy depths with a plop!


Wolves were well in view for the first three days of the Watching for Wolves tour taken by Karen, Austin and Caro who from the first watch were treated to spectacular sights of six wolves for upwards of thirty minutes in good evening light.  The pack members were frolicking and relaxing after having eaten from their recent kill. Such interaction , watched without any disturbance to these truly wild creatures, was joy to observe. Also that evening John, Caro, Karen and Austin could follow two playful foxes as they gambolled around the beehives. There were plenty of red and roe deer too to focus upon...indeed a night of stunning sights to start this tour.


The next morning our lucky trio were treated to close sights of red deer very near to the verge as John drove to the same viewpoint for this dawn watch, hardly daring for a better or equal sight to last night's experience. Caro spotted a rock bunting in her telescope but the main attraction was seen by all; three wolves were jousting, chasing and generally full of joy in the spring sunshine, and they were able to be watched for about 90 minutes.

As each got increasingly more adept with the scopes, Karen spotted a wolf during the evening watch and then it emerged that they could watch not one, but four, wolves, again in good light and in playful mood.

The next morning John decided to have a change of venue for the watching, and this move paid dividends as John, Austin, Karen and Caro saw the fascinating play-off between a fox and a wolf where the fox was spooked by the appearance of the wolf. Although the wolf momentarily disappeared from view, it soon came back within sight and John was able to video this fine specimen, albeit losing a bit of the winter pelt in time for the summer coat. Again at this viewpoint there were plenty of red deer to watch.


Wolf scat and tracks were seen during the day's tracking and Caro spotted a rock bunting again. The morning after this walk Caro pointed out a stonechat as she became perfectly at ease with looking through a telescope. Orange Tip and Small Blue butterflies were out amongst the wildflower meadows and a real treat was to see and hear a woodlark.

The golden eagle sitting on a rock during the entire wolf watch on Wednesday morning was a new bird for Austin, Caro and Karen and the short-toed eagle seen the next day at the Rio Esla brought their total eagle count to 4...golden, short-toed, Bonelli's and booted. 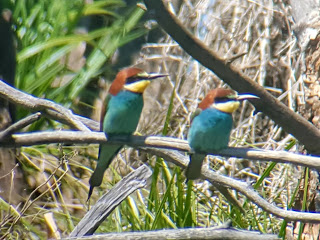 That evening a large wild boar was a special sight for our three clients who also saw pine marten, fox, red deer and roe deer.On our way back to the hotel for dinner we all witnessed a near miss between a car and a large red deer which was running across the road in front of this car which had not seemed to notice it in the dark, night-time conditions. It is not safe to drive at speed along these road so open to wildlife and accidents happen frequently between cars and deer or wild boar. But fortunately there was no collision and all parties breathed a sigh of relief. 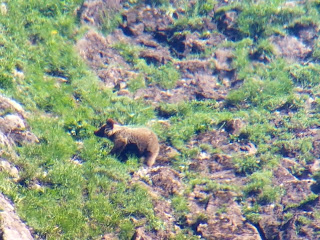 The 'flaming June' experienced by many in UK did not make it to Northern Spain where many of the days were decidedly cool and wet. But such adverse condtions did not affect the bear views enjoyed by Walter and Susie on their Browsing for Bears tour with John in Asturias.


They were able to watch four different individuals over the course of the tour, one being a large male who was patrolling his area in search for females. Indeed one just such female managed to keep a distance from this huge male by concentrating her search for food in a ravine just acoss the valley from the male. This female also had two of her last year's cubs still with her and their safety was her priority. This is not always an easy task with predatory males and also when the cubs themselves are so inquisitive.Walter, Susie and John watched as the two cubs interacted with some fearsome Mastines which came close.

As well as the tremendous bear views to enjoy and reminisce about, Walter and Susie left with superb memories of pine marten seen on the road, very good fox sightings and lots of chamois with kids. 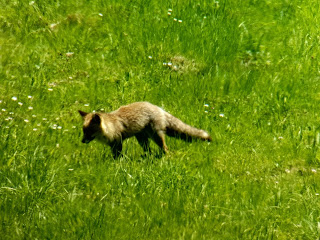 Another successful Browsing for Bears tour!


The weather did not inprove for the next two Watching for Wolves tours back in Sierra de la Culebra later in June, and Julie and Alex, then Phil, Leslie, Jan and Barbara  made the best of the drier spells in their search for one of Europe's most elusive of predators, the Iberian wild wolf. And such refusal to give in to pretty awful weather paid dividends as Phil, Leslie, Jan and Barbara had wolf on three separate occasions, including some very good views of wolf as it walked along a track giving plenty of opportunity for good long watches. As Leslie mentioned to John that she thought she had a wolf standing on rocks in the far distance silhouetted against the grey sky atop a far-off hill, the rest of the group could be forgivien for being sceptical, but it really was a wolf which Julie had caught in her scope with tremendous accuracy! A classic pose standing on the rocky hilltop, this was a fabulous view and all credit to Julie for finding it.


Cock linnet and wren were also seen and heard in full song.


Iberian frog was seen during tracking activities along with crested tit, Bonelli's warbler and melodious warbler...all of these being treats to be able to find and watch.

Other species seen during the days' activities included red squirrel, oscillated lizard, Iberian hare, red and roe deer, wild boar, and a fox hunting voles. Good wolf tracks were seen throughout the tour. At the Douro Gorge, everyone basked in superb views of Egyptian vulture and griffon vulture as they soared against the grey clouded sky, not a typical June sky here, but extremely atmospheric. 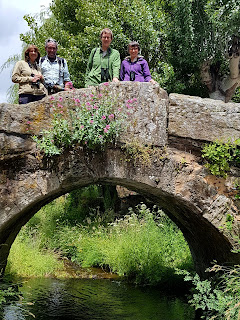 For our final tour of July we were delighted to welcome Jill from Melbourne, Australia who made the epic journey to Asturias airport purely in the hope of spotting wolf in the wild, a species which had so far eluded her.  The first evening watch was interesting with fox, ravens and nightjar out in the warm evening air, but we were all delighted when the next morning wolf watch Jill was treated to a sight of her first wild wolf, a large Iberian wolf  which appeared just across a field not long after a roe buck and two stags had  crossed a path nearby.

John and Jill were able to watch this rewarding sight for up to five minutes before it moved into the heather to be lost from sight. The excellent view of a large wild boar, again a first for Jill, was a high point in the evening watch; such a super first day for Jill made her lengthy journey worthwhile. Good views of red and roe deer abounded plus some excellent sightings of griffon and Egyptian vultures, more creatures Jill had wished to see if possible, made both the watches and the daytime tracking and exploring very rewarding, plus good views of black kite, Alpine swift, crag martin, common kestrel and hoopoe; all adding to Jill's enjoyment of this very special area.

However on Jill's last moring wolfwatch, she was treated to a wonderful sight which will be in Jill's memory for a long time.On open light-coloured grass and therefore showing clearly they watched a large Iberian wolf as it loped across the small clearing.  Then later another wolf appeared on a further track and could be seen walking up the left side of this track for several minutes as the video above shows. The first and final full days of Jill's Watching for Wolves tour had been exceptional for her, and provided Jill with enduring memories and a feeling of satisfaction to have seen this wonderful large predator go about its movements without disruption. A truly memorable tour  and well worth the time Jill spent in various airports around the globe before she eventually arrived in Asturias, Oviedo!


As ever, John has given his utmost during these summer months whatever the weather, to provide each and every one who is with us on a Wild Wolf Experience tour with wonderful wildlife memories, and he never fails to impress with his spotting and identification skills. We are already looking forward to sharing more memorable wildlife moments via this blog in September.