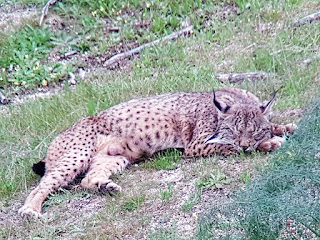 The stormy weather slipped through into April from such a wintry end of March and Spring seemed to have missed most of Europe out. The normally pleasant weather conditions typical of Andujar during this month were replaced by heavy rain and wind storms which made wildlife viewing almost impossible. Despite such difficulties, time was spent locating Daubenton's, Greater Mouse-eared and Schreiber's bats roosting in a cave and in a welcome break in the poor weather, John was able to video this Spanish ibex for our clients Mike and Meredith who had travelled from Pennsylvania.

Fallow and red deer were also spotted plus moufflon. 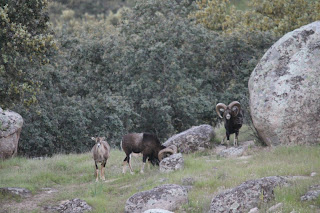 A chance of an Iberian lynx sighting was uppermost on their itinerary but the constant rain and wind storms in their first two days seemed determined to hamper these efforts.  However on the third day the storms abated and calmer weather meant that John, Mike and Meredith set out for a morning lynx watch full of optimism. The views just kept on getting better and better, beginning with a solo, male Iberian lynx walking up a track in clear view, to everyone's congratulations after such disappointing weather conditions.

But this was just the beginning and the trio went on to watch some tremendous views of a female Iberian lynx at rest, at one time with tiny cubs probably just out of the den for the first time. In the following video taken by John the female arises from repose, stretches and sets off to hunt after a well-earned rest


Bird sightings were impressive despite the weather, beginning with a lovely, little owl sitting on a rock on the first evening and being spotted there every day of the tour. Certainly the changeable weather conditions provided some excellent photographic opportunities as with this shot at sunrise after a heavy shower had subsided. 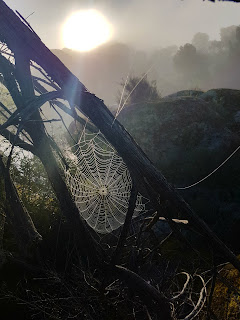 During the tour watches Mike spotted a singing Sardinian warbler and Meredith noticed a golden oriole, also in full throat. All three were treated to magnificent views of Spanish Imperial eagles calling and flying low over the valley, plus golden and short-toed eagles. 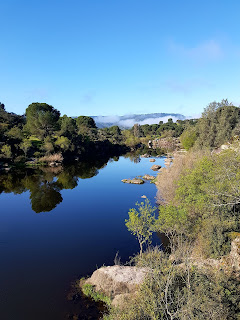 
Wild boar sightings were plentiful from day three when the weather allowed John, Mike and Meredith good views of this family party of wild boar, with piglets running in the welcome sunshine.

A flock of magpies were also active showing their symbiotic relationship with the wild boar.


Mike and Meredith  were able to return to Pennsylvania with excellent memories of their superb .sightings of the Iberian lynx, acknowledging that it had been well worth the journey. 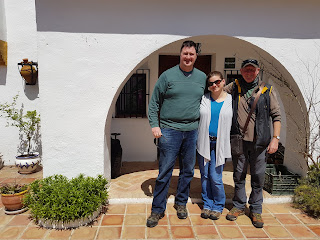 The tranquillity of the Sierra de la Culebra was the perfect antidote to  the stresses and demands of a busy life in UK for Vanessa and straightaway on the first morning Vanessa and John were getting good views of crested tit and cuckoo, a bird so rarely seen or heard now in England, The proliferation of pine processionary moth caterpillars provide a plentiful food source for cuckoos here. Red and roe deer were out in good numbers too. During the tracking activities on the first day Vanessa saw clear, recent wolftracks and scat along with views and sounds of black redstart, booted eagle, white stork, crested lark, wheatear, siskin, goldfinch, black kite and red kite plus getting as close as is advisable to some mastines guarding the sheep. The second day Vanessa was able to follow the movements of a large number of red deer including a light-coloured hind. Birds spotted and enjoyed included rock bunting, coal tit, woodlark, stonechat, Bonelli's warbler, stonechat and booted eagle. On the Monday morning John and Vanessa took time out to locate a nightingale  - Vanessa's first - and the obliging bird sang and displayed admirably, along with Dartford warbler. 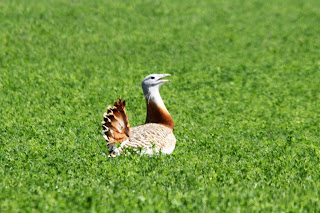 The trip to Villafafila offered tremendous views of great bustard both in flight and lekking, plus bee-eater, griffon vulture, honey buzzard, red kite, black kite, and marsh harrier while a stop over at the serene Rio Esla garnered wonderful views of two otters plus great white egret, purple heron and raven. 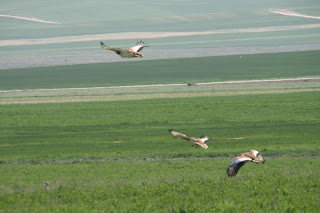 The tour seemed to come to an end just far too soon and Vanessa made her way to the hotel room to pack, intriguingly armed with a strong pair of bolt-cutters. The journey back to Asturias airport was stunning as ever and we trust that a little piece of the Culebra calmess now resides in Somerset! 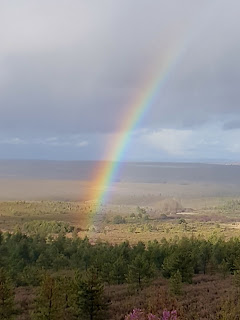 Wolf sightings continued right up until the last watch of the month during which time John was fortunate enough to film this amazing footage of seven wolves preparing for and subsequerntly hunting a small party of red deer. I finish this month's newsletter with a small piece of this amazing video.