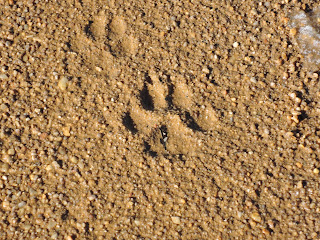 February has given us some wonderful blue skies and cold clear days, as can be seen in this video of young red deer on a very frosty early February morning.


However, there was warmth in the sunshine during daylight hours and John and I were surprised to see an Iberian wall lizard out sunning on our stone walls as early as February 4th. The relative warmth of that day also brought out various caterpillars and millipedes.  Our first wolves of the month were seen on the morning of February 6th; watch them as they feed on a recently dead red deer.

The closest lupine encounter this month was on 13th February at 17:30 as John was battling against a strong head wind while attempting to walk our dog Sheeba, just outside our village of Cional.  A roe deer sped across the road just in front of John in obvious panic, and John didn't need to look far to see the reason - a lone wolf on the prowl and loping across the sandy soil into the heather 200 metres away.

On the first morning of Roger and Silvia's tour, indeed on the car journey from the airport to our base here in the Sierra de la Culebra, John was able to show them both several great bustards and they were all delighted to watch otter during a stop en route. The next day (17th) gave everyone a good view of Iberian hare and then two foxes during the morning watch, plus large numbers of red deer stags and hinds at all watches.At one time we were all able to watch three red deer with two roe deer also in our scopes,thereby clearly highlighting the differences between these two species. 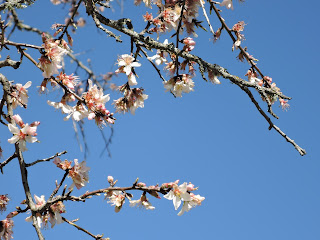 Scenes such as this almond blossom against a clear blue sky 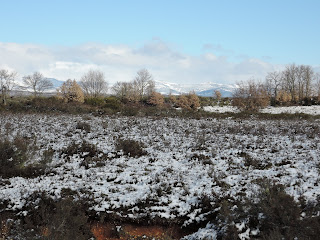 gave Roger and Silvia some clear but cold morning wolfwatches 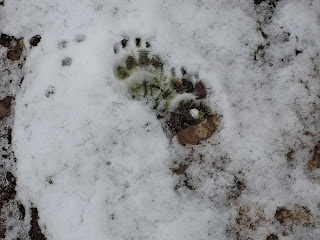 where they spotted badger tracks recently made in the morning's snowfall. 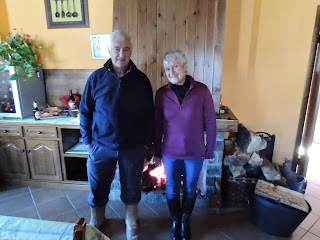 Roger and Silvia were ready to warm up by the log fire each breakfast time back at the hotel!

This month of February has given us interesting morning bird song and we have welcomed back several migrants already.  Crossbills were seen on 11th February and Roger and Silvia also enjoyed seeing them on 18th February along with rock bunting,great spotted woodpecker, Iberian green woodpecker and short-toed treecreeper mostly seen while walking some of the tracks. They also heard a nuthatch and indeed, from Roger's clear description of an encounter in the wood just behind the hotel, it is very likely that he was watching a wildcat on the morning of 20th February.


"John was such a star looking after us so well.
Thank you so much for a wonderful experience."
Roger and Silvia.Feb 2016.

During their trip to the Douro gorge, John, Roger and Silvia were interested to see house martins as well as the more familiar crag martins, at the dam at Miranda de Douro, along with Iberian grey shrike and stonechat also seen on that day(19th February).Larger birds seen during their visit to the gorge sites included common buzzard, griffin vultures at close quarters and a spectacular sight of two golden eagles,a male and a female,with the male performing several displaying dives to entrance his potential mate. 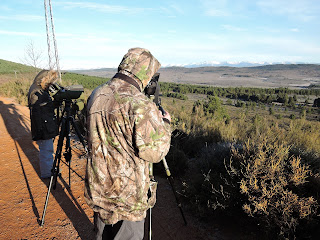 Another interesting raptor spotted during Roger and Silvia's final watch on the morning of 20th February, was a peregrine falcon perched on the crag behind us. 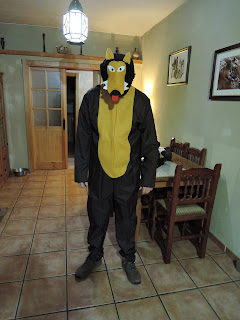 No-one recognised this apha male as John chose a very relevant costume for the Carnaval weekend at Villanueva del Valrojo in early February! During the day many people enjoyed the sound of the traditional piper playing in Otra Cosa.

Alan and Jacqueline thoroughly enjoyed close views of many great bustards both on land and in flight as they travelled from Madrid to our base here in the Sierra de la Culebra.  They also saw shoveller, grey heron, great egret and little egret plus marsh harrier; not a bad start to their tour!

It was dark by the time we were driving along the road to the hotel, but it was exciting to catch the shine of deer eyes in the dark, plus a young Iberian hare which ran alongside the car for several yards and was clearly visible in the headlights. Despite their first day (26th February) being decidedly wet, Alan and Jacqueline were very lucky to see several interesting bird species at close quarters while walking around some of the quaint,working villages near their hotel. These bird sightings included our first hoopoe of 2016,  with snow falling, 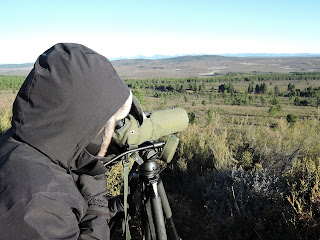 During that evening's cold wolfwatch, we took notice of a grand stag who posed proudly as if totally aware of his beauty and his incredible headgear until, just as dusk was falling, Jacqueline wondered what the moving, large dark shape was caught in her telescope.  It was a wild boar and we were all able to watch  as this large male trotted fairly rapidly through the short, yellowing grasses, to be eventually lost owing to poor light and heavier undergrowth.


The next morning started well with good views of marsh harrier and indeed a wolf was seen, albeit fleetingly, by the ranger on the evening's wolfwatch. Ravens were able to be seen and heard along with good views of red deer and three roe deer. 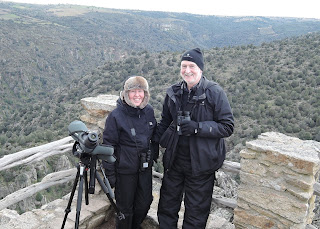 This proved to be a wonderful day along the Douro gorge with excellent views of blue rock thrush at the dam at Miranda.

The golden eagle pair were still involved in display flights... a joy to watch at such close quarters During this video taken by John you can see the golden eagle twisting its head from side to side before speeding down out of sight in a dramatic display dive. Such a great day of memorable moments finished off that evening with good views of black-shouldered kite both in flight and roosting.


The journey back to Madrid airport on 29th February gave Jacqueline superb views of three black vultures which provided a cyclical satisfaction to the whole tour; on the original trip away from Madrid airport 5 days ago, Jacqueline had missed seeing black vulture which John and Alan noticed. This time, no-one missed out on a good view of such an impressive bird.

"I just wanted to thank you again for a wonderful weekend, I hope we can do it again sometime"

( All photos and videos taken by John during this month of February 2016 in the Sierra de la Culebra)
Posted by Wild Wolf Experience at 09:17