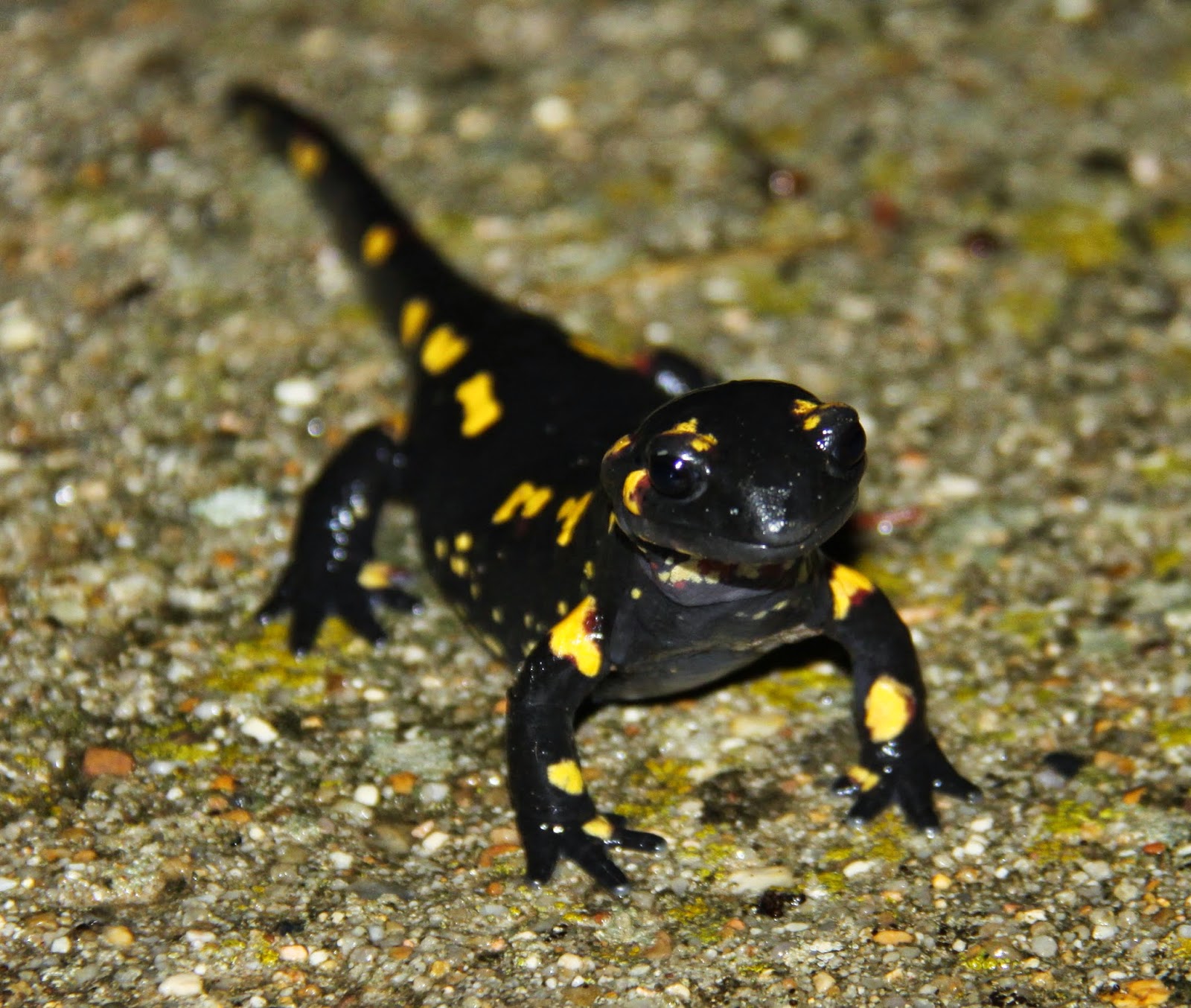 What a busy, fun and successful month! And now,all of a sudden, it's autumn with the tremendous surround-sound of the stag rut, with the apples, pears and quince trees heavy with ripening fruit and the Fire Salamanders coming out to find a winter retreat.

The very first few days of September, John, Robert and Sally were treated to wonderful views of 6 individual bears in Asturias, including a mother and her 3 cubs, the video of which can be viewed on our Wild Wolf Experience Facebook page. Above are some further examples of these compelling characters enjoying the autumn Alpine Buckthorn. 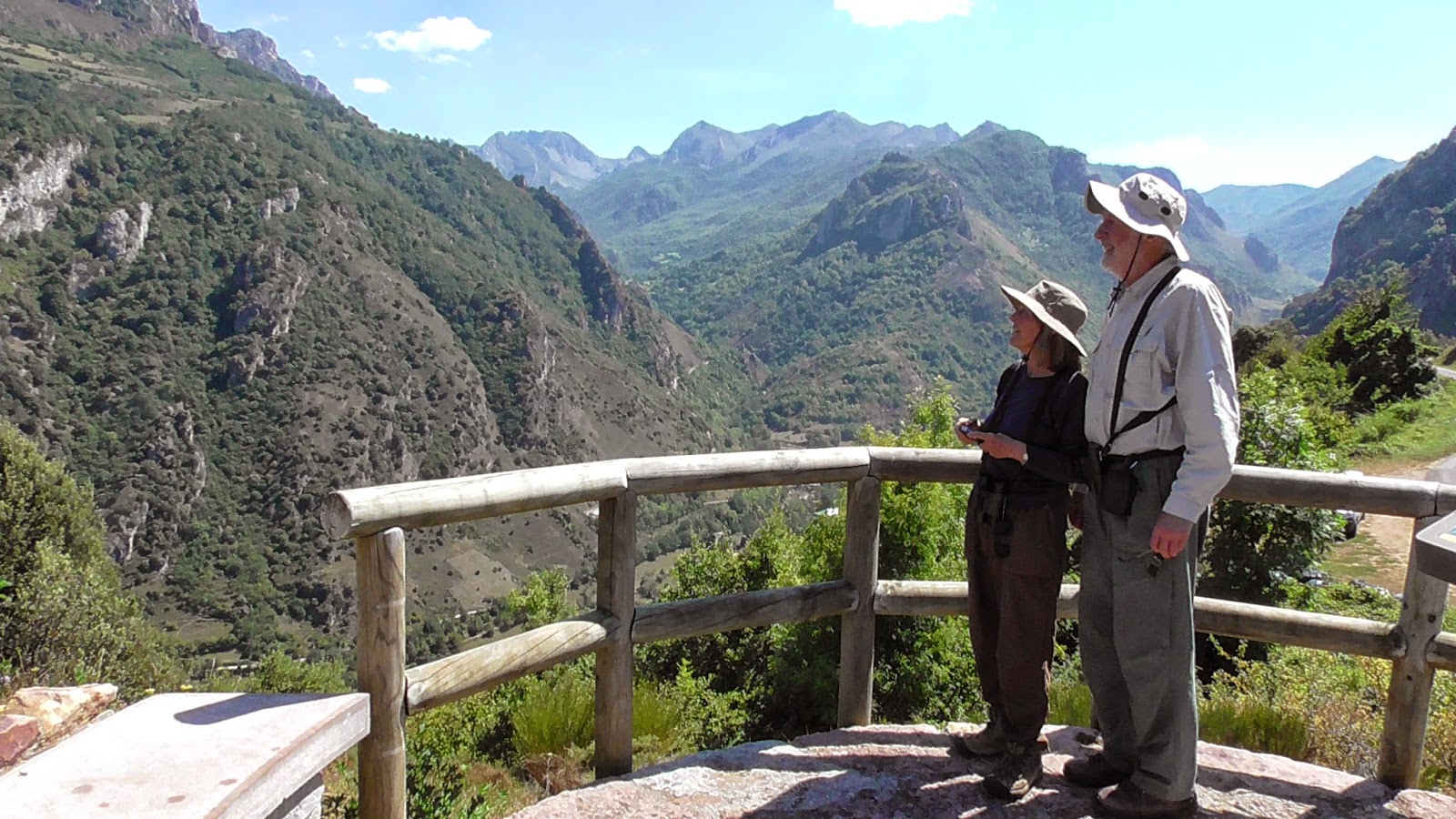 They also had plentiful wildcat sightings, videos of which can again be seen on our Facebook page.  I attach a video here of a wildcat they were able to watch whilst it was out hunting.


The stunning scenery of Somiedo was at its autumnal best. 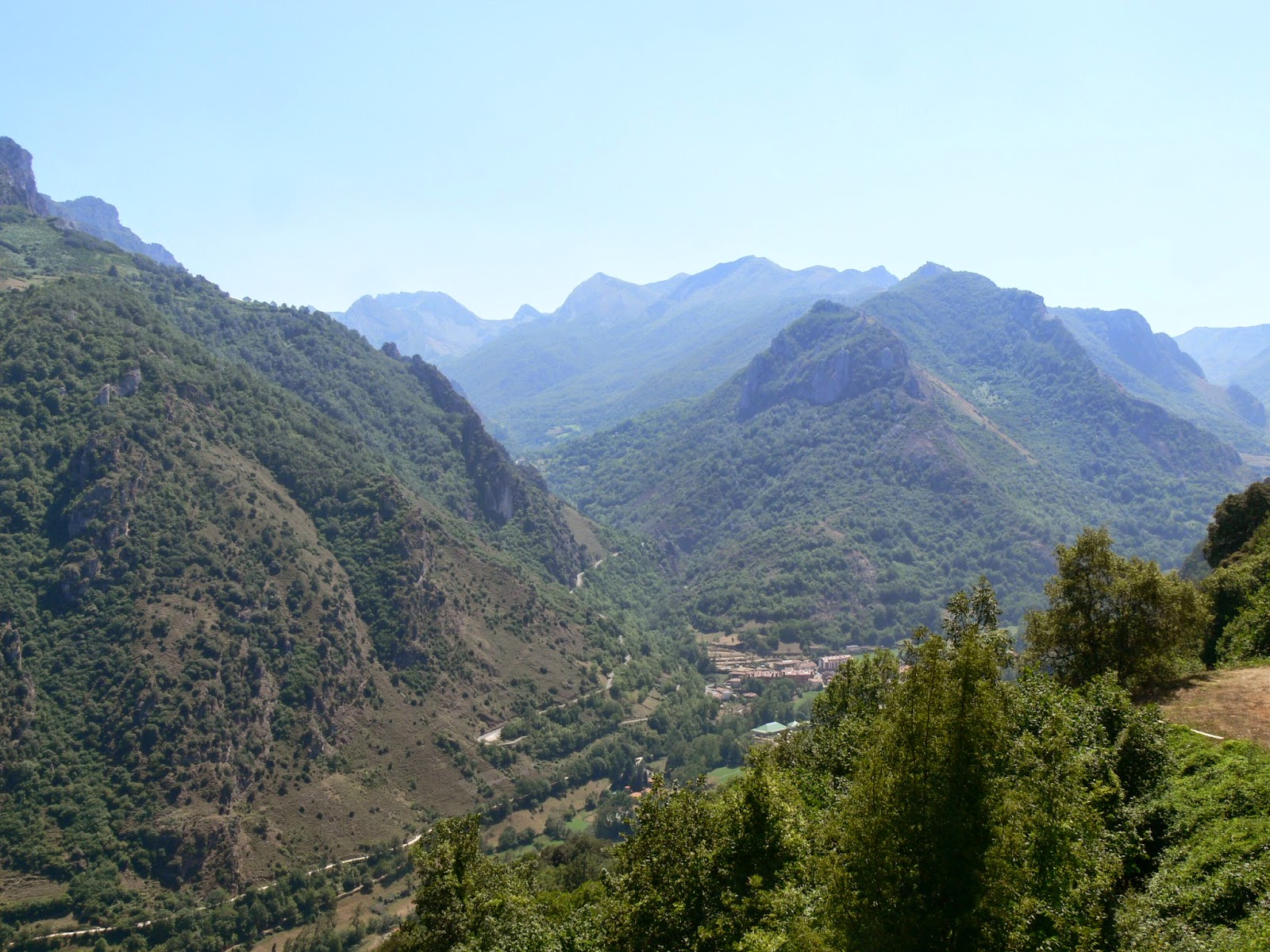 Later in the month, Bob and Myra were treated to tremendous vulture views here, plus 15/20 chamois and good sightings of wildcat. 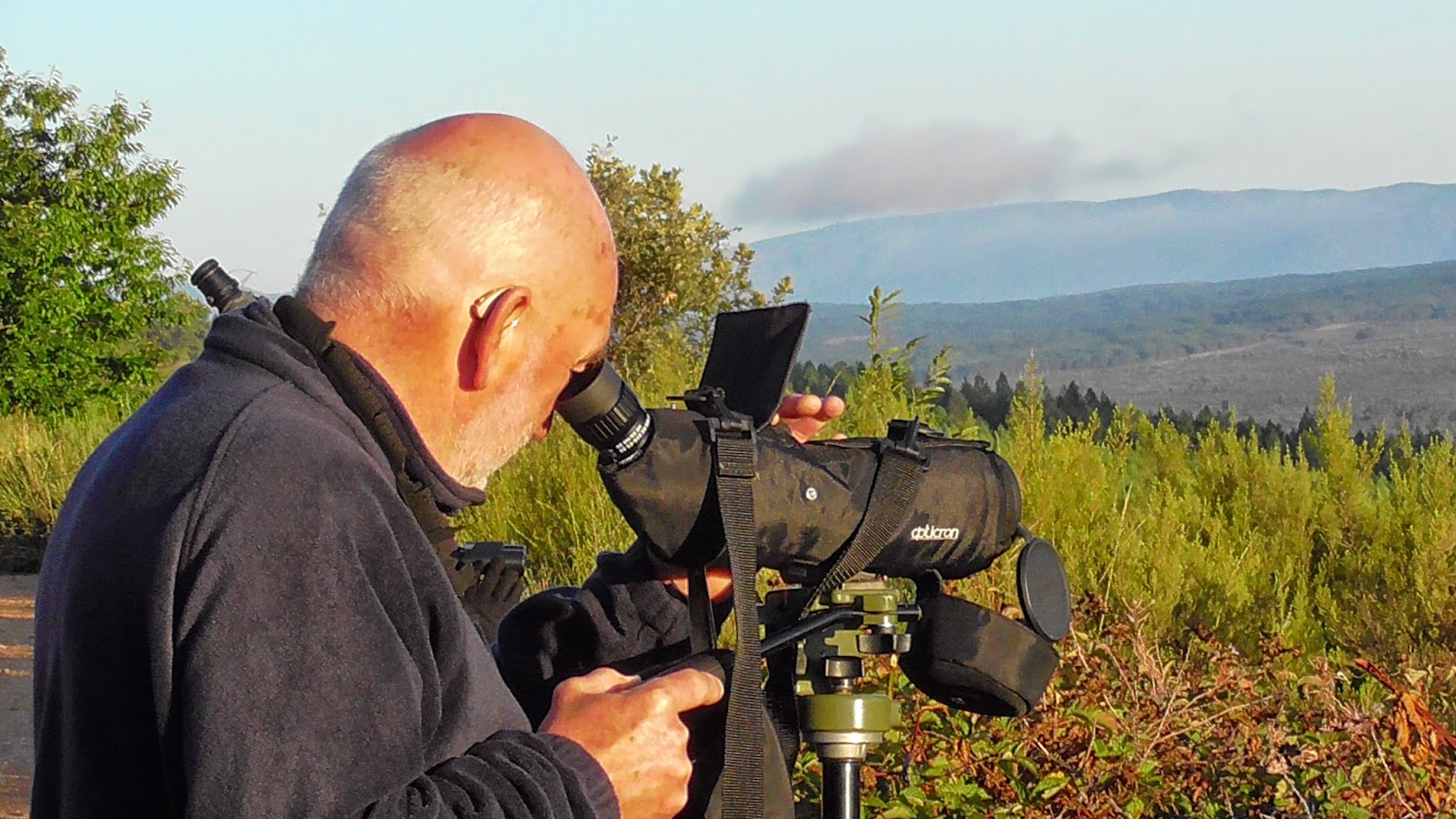 The weather, notoriously fickle in this part of Spain, was indeed changeable for Bob and Myra's tour, but on their final night in Asturias, as dusk approached and further clouds threatened, a large, leggy dark male bear came out to eat. He was a delight for Bob and Myra to watch on this, the last night of their incredibly successful Wolf and Bear Tour.

"Thanks to John & Margaret's expertise we saw both wolf and bear along with a plethora of other mammals,birds and amphibians....It was an experience which we loved and one which we are glad not to have missed."                 Bob. 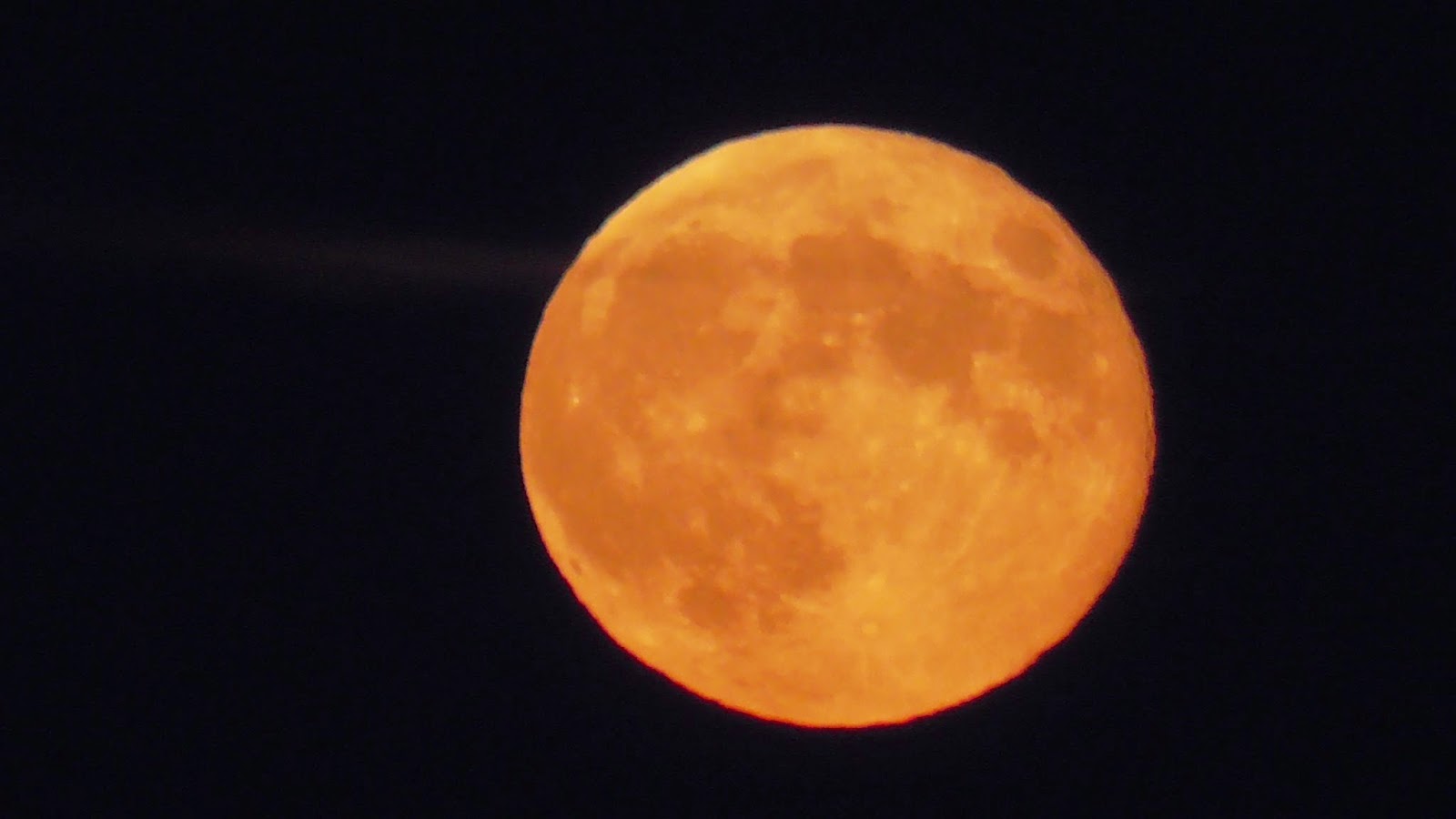 Any glimpse of a wild wolf is exciting, but for Bob and Myra there was a special lupine treat in store. After a couple of days with the watches enlivened by some tremendous stags trying to cope with the urges of the rut ( again video of this on our Facebook page) under the light of a powerful moon, the morning of the 12th September wolf-watch gave totally exhilarating views as John, Bob and Myra watched 4 wolves playing, greeting, teasing each other and chasing for upwards of 30 minutes - absolutely incredible!

In the latter half of September the nights were drawing in and Linda, who arrived into Madrid 20th September for a week long Watching for Wolves tour, savoured the special atmosphere of the autumn wolf-watch,with its gradual crescendo of rutting stag sounds.  By the middle of her time here, wet weather had set in,but John was still out searching for signs of wolf,while Linda and I remained dry in our vehicle.  However, at 20:00, the rain eased off and we joined John to set up our scopes to watch.


At 20:15,with thunder rolls,lightning flashes and under heavy grey skies lined a fiery red, a large wolf appeared on the firebreak.  He made his gender all too apparent by cocking his leg to urinate on a bush, then strolled unconcerned up the track.  At the top, he surveyed the area then moved directly into a nearby copse to be lost from view. 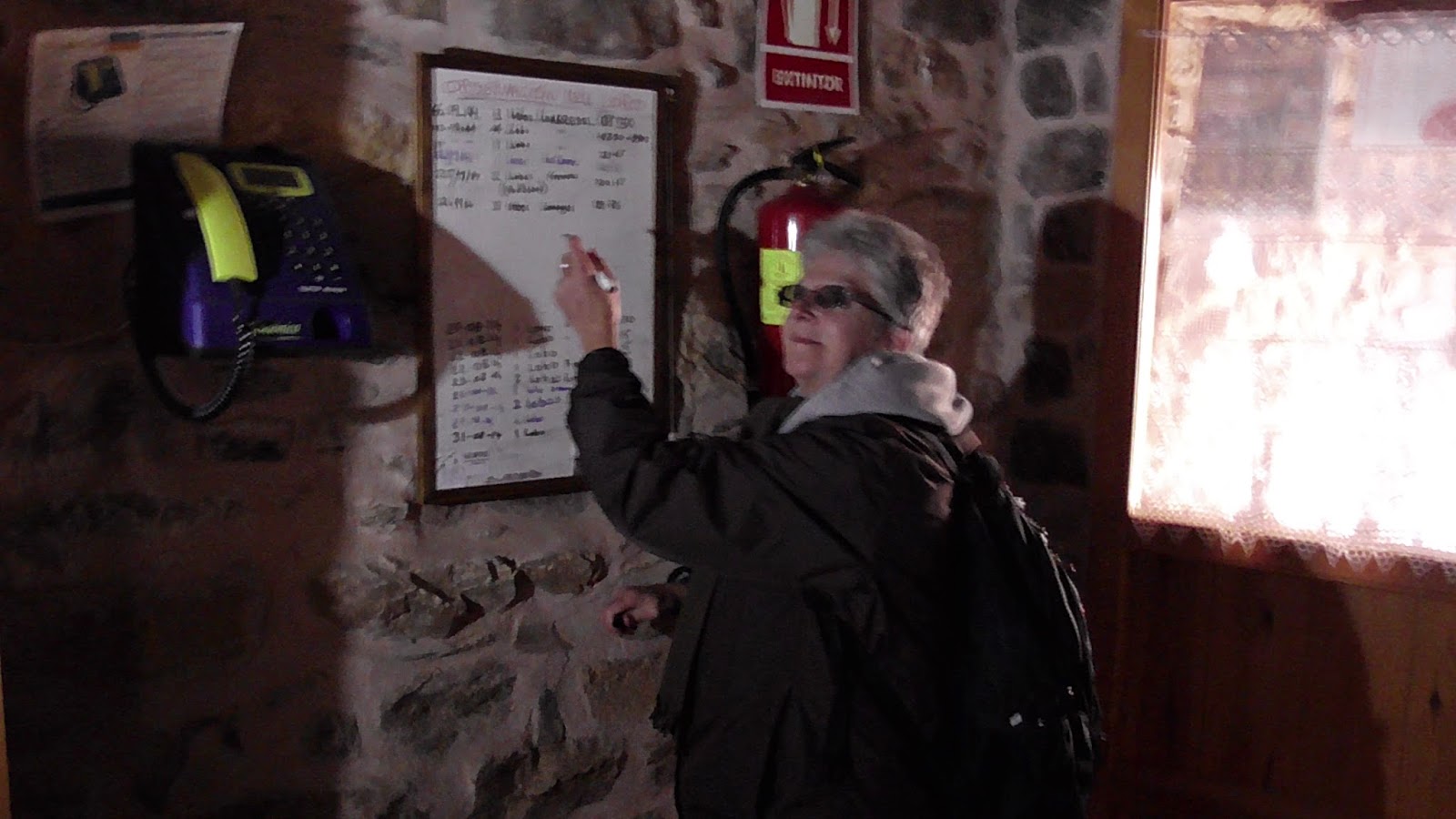 Wonderful! Linda was delighted to have  tracked, waited and eventually seen her first truly wild wolf in such a dramatic setting.

But with Linda, the  connections with wolves continued on Thursday,with the morning watch showing 3 wolves! While a lone wolf was to be seen on flat ground not far from the viewpoint, two wolves were also spotted by Linda walking down the track. Nonchalantly,one of these stopped briefly to drink from a pool on the firebreak before they both continued down to join the single wolf still waiting in the low heather on the right of the track. This was a wonderful view and what a start to the day! The evening watch, which started promisingly with 2 large wild boar rooting in a nearby ploughed field whilst 2 roe deer grazed behind them was equally exciting. As the light faded and we began to consider packing up, a mournful howl pierced straight through the rasps of the rutting stags, and the howling from 2 individual wolves continued for at least 15 minutes, as the darkness enveloped us increasingly. We merely stood, rapt, in silence as  against a backdrop of a stunning fiery sunset, 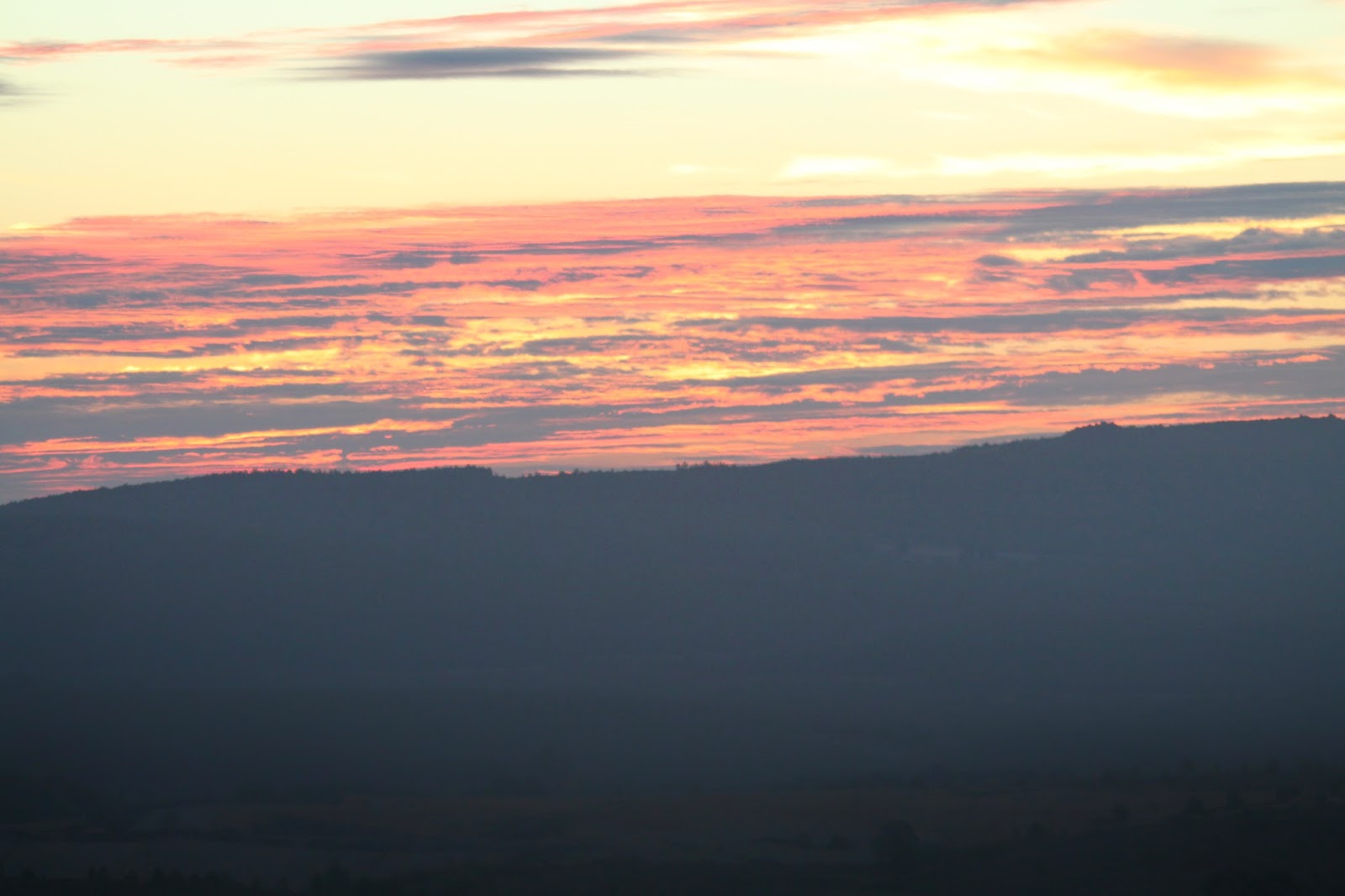 we were granted access to sounds which had remained unchanged for thousands of years, and the goosebumps ran down our spines.

Linda's nexr wolf encounter, still of dramatic ilk, occurred on her final morning wolf-watch when a solitary individual was to be seen amidst swirling mist as the sun rose over the mountains of the Sierra de la Cabrera. For several minutes, John and Linda could study this grand specimen as it first stood, then sauntered off over the top of the ridge. A wonderful finale to a most successful week of Watching for Wolves. 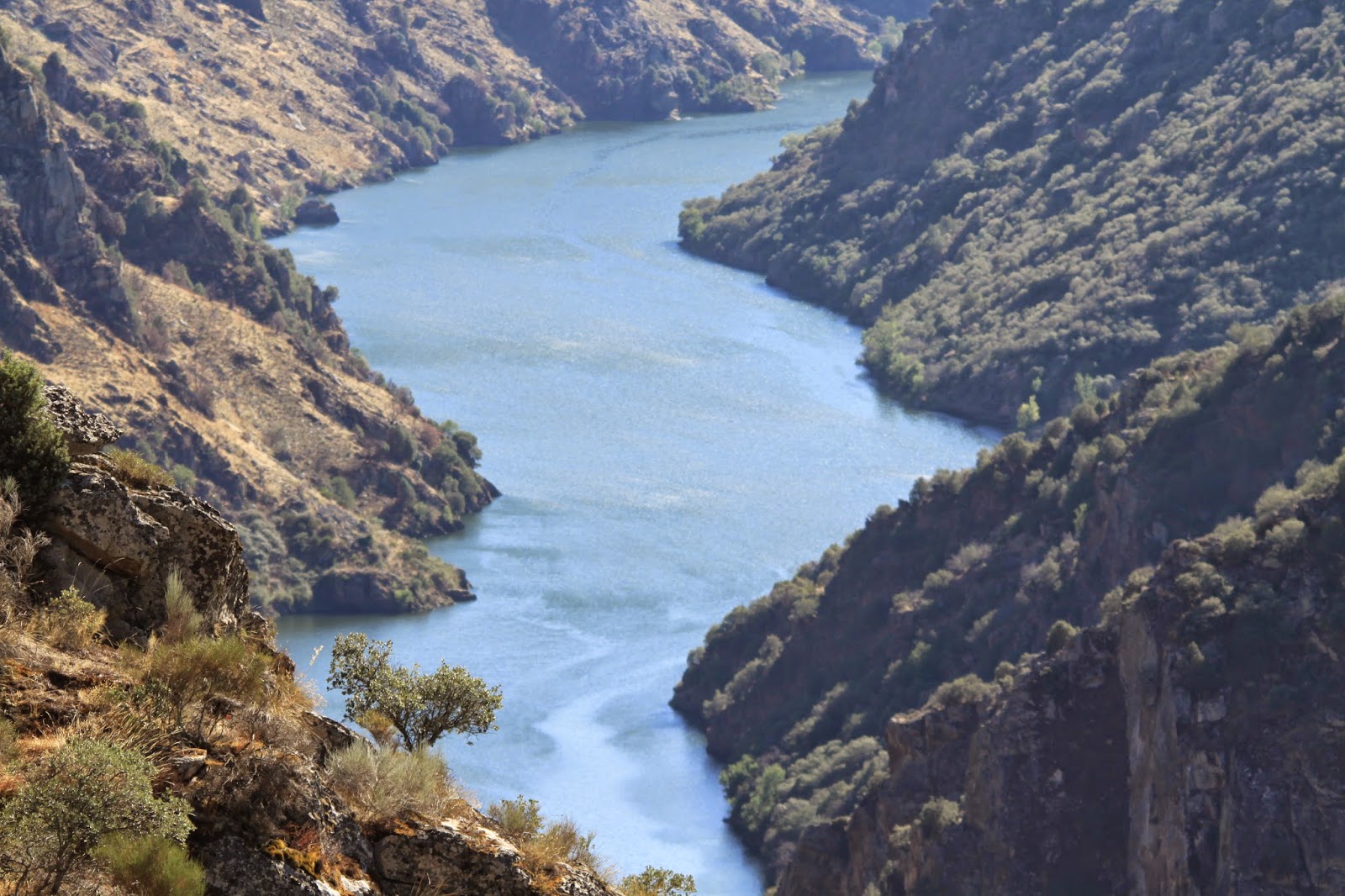 The beauty of this vast gorge, the natural border between Spain and Portugal, never fails to impress, and Bob, an amateur archaeologist, also enjoyed the link with his home in Northumberland,noting at Aldeiea Nova that  a Roman legion had camped there en route for Hadrian's Wall. Here John, Bob and Myra enjoyed excellent views of male,female and juvenile golden eagle - in total 6 different golden eagles were seen on this day-plus northern wheatear, many griffon vultures, kestrel, black kite, dunnock and several Iberian water frogs.  At San Vitero as they set off on their very successful cross border trip, they were able to watch a short-toed eagle catch a snake and proceed to eat it while still on the wing.

Linda too, appreciated the contrast of culture evident immediately upon crossing the border, and didn't think too much road-rage would be caused by the typical traffic jam experienced in these villages.

The overwhelming impression of this 3 day festival was of positivity, and of the vision and vitality of the local 16 strong group, calling themselves Interior Legendario, who worked together to organise this festival to focus upon wolves and to take people free of charge on wolf watches. A large group of people,including our friends from Northumberland Andrew and Jane, were lucky to be on just such a watch on the Saturday morning. Modesty forbids me to say who first spotted the wolf, but indeed everyone was treated to an enthralling view of a fine example of this apex predator walking confidently down the firebreak, right in front of their viewpoint only 500 metres away. 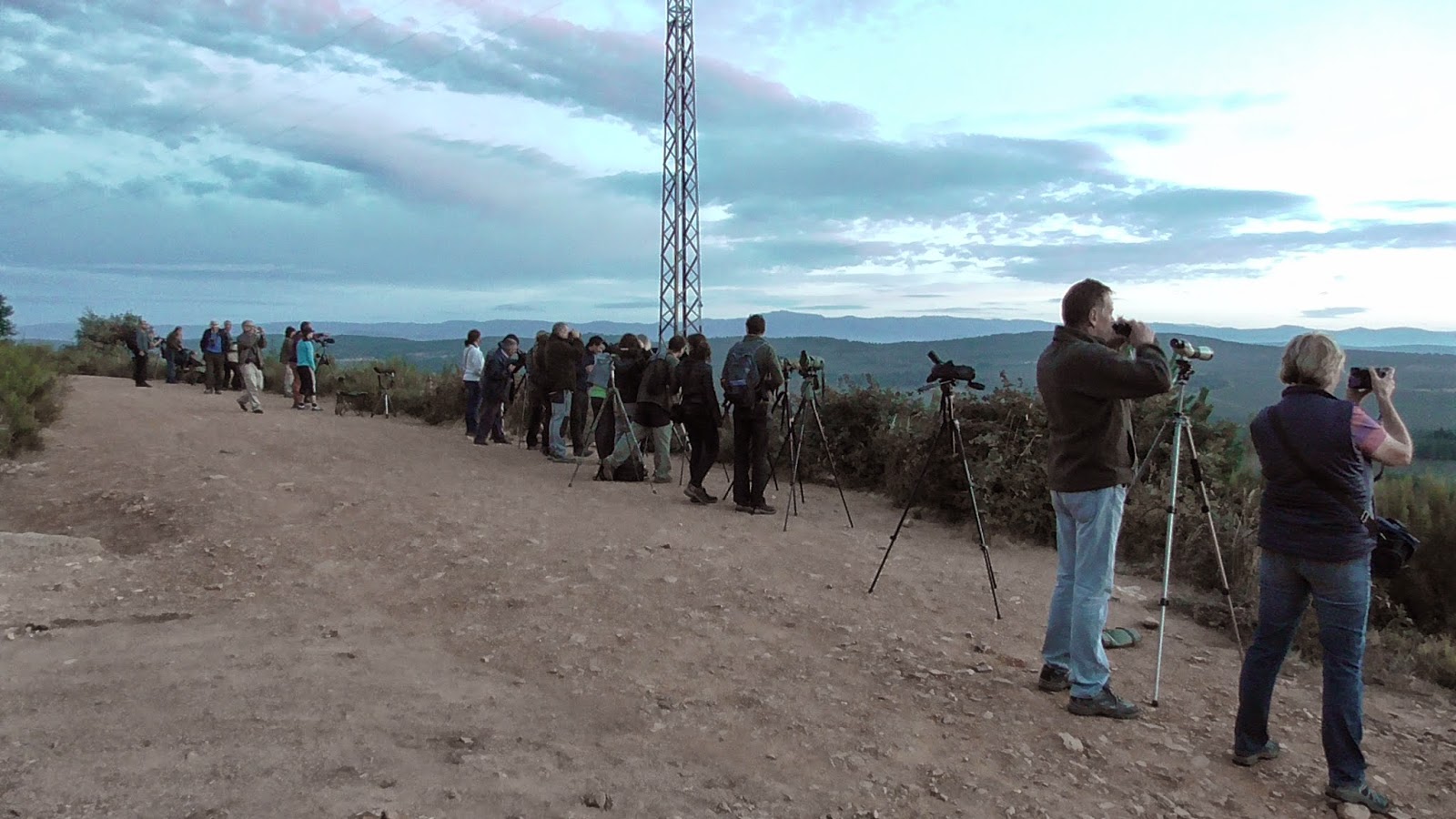 Farming practices were of course mentioned both in a display and a lecture by the eminent Spanish biologist Carlos Sanz who lauded the Iberian wolf as a “joy on our natural inheritance which must be observed and maintained” but not enclosed within artificial boundaries. The use of Mastine dogs is of course widespread here in the Sierra de la Culebra, and the benefit of including a donkey amongst the flocks for both its exceptional hearing and kicking ability, was expounded. Carlos Sanz was representing “Project Wolf- Wild Life and Rural World” which spearheads work done by eleven groups active in Spain, Portugal, Estonia and Romania to look for solutions to enable co-existence between farmers and the wolf.

As well as the wildlife, the festival also hosted sporting activities organised by Zamoranatural.es which included kayaking on the Rio Tera and a challenging 67 km mountain bike trail, culminating in a gathering to enjoy the local dish of arroz a la Zamorana.

Less active visitors could enjoy an illustrated talk about traditional architecture of the area by Esther Isabel Prada Llorente from the University of Alcala, or discuss the novel “Beatrice y la Loba” with the author Concha Lopez. It wouldn’t be a Spanish festival without excellent music and the Saturday night of live music did not disappoint. The Portuguese singer Malfalda Veiga sang her own compositions for the first time in Spain, with a very versatile backing group, followed by a synthesis of musical talent called El Naan, who could even create exciting sound out of a kitchen table! On the Friday night, visitors were treated to a night of astronomy with Joaquin Tapioles after enjoying a theatrical performance by Candido de Castro challenging the roles of the wolf in traditional storytelling, “Cuentes de Lobos” alongside a display of local pottery by ” Numa”

This weekend in September witnessed a wonderful occasion where locals worked in harmony to try to display the essence of this vibrant part of a colourful country, with the wolf always at the forefront. We are already fielding questions about “Next year…?”but at the moment are happy to have raised awareness and to have engendered discussion, whilst certainly helping the hamlet of Villardeciervos and its TerritorioLobo become a flagship for the continued survival of the Iberian Wolf in the wild.

I do not apologise for the lengthy Newsletter this month; it is but a resume of life in this area, where every day brings new sights and experiences and I am happy to be able to share some of them with you here.


"Thank you both so much for looking after me so well and going the extra mile for me...still suffering 'wolf withdrawal' but looking at my photos helps!...Please give my thanks to Antonio for the wonderful food and wine."    Linda.
Posted by Wild Wolf Experience at 13:46