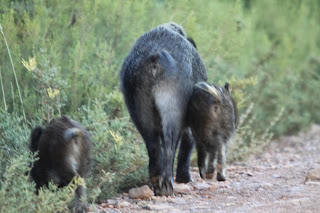 
John and I met Ros and Terry at Villardeciervos in the afternoon and over coffee we discussed our hopes, plans and arrangements for this week's tour.  We mentioned that we would hope to get some good views of the majestic stags which were in the full throes of their rut, when we were "treated" to a rather closer view than we would have liked as a visiting hunter was loading the back of his shiny SUV with the trophy of a grand stag's head shot that morning.  He was uncommunicative as we looked at this magnificent beast...I refer to the stag and most certainly not the hunter!.. and he quickly paid his bar bill and left. 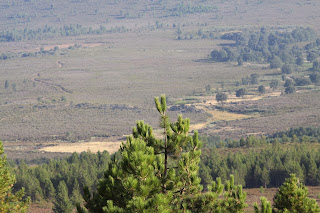 After settling into our hotel situated deeper still in the heart of wolf country,  we appreciated a short break before getting ready for our first wolf watch under leaden skies.This was primarily to get our bearings at this most promising of sites this year, la pista,and as such was time well spent.  By the end of the watch, Terry in particular could locate potential viewing spots in preparation for some good views we hoped. 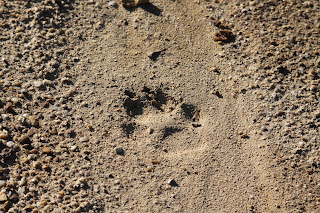 We were extremely unlucky with the weather for most of the wolf watches this week, as heavy rain certainly hampered our chances of good sightings. The first morning watch on Monday 30th September was interesting as we spotted a Red Squirrel to the right of the track, but the rain was really the victor for most of our watches.  The evening watch on that first full day was in clearer, drier conditions as we watched below heavy, threatening clouds.  Thankfully there was no mist, but also no sun! However we were able to watch several fine Stags that night, including a large Stag and Hind out on the track.Just as the light,such as it was,began to diminish at approximately 20:20, we could just make out a family party of adults, sub-adults and young Wild Boar which were rooting around in the low fields on the adjacent hillside. Terry was delighted with this as he had always wanted to see Wild Boar in their natural habitat and we intimated that we would hope to get him closer views.  Little did we suspect just how close those views were to be later in the week. During an evening watch later that week we spotted a family party of Wild Boar trotting and exploring down the firebreak track. 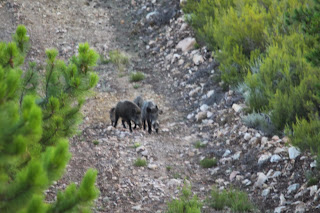 We were all delighted to watch them and our delight turned to amazement, which in turn developed into one of those moments when no-one dared breathe or move a muscle, during this wildlife encounter which will remain with all four of us for the rest of our lives.  Reaching the end of the firebreak track, we assumed the Wild Boar entourage would veer off into the neighbouring 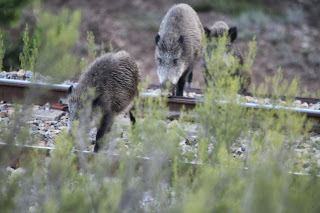 copse.  But, to our total surprise,they climbed up the embankment, crossed the railway line in single file and stepped into the bracken and blackberry bushes right in front of us.  We could hear them moving closer and could see the bushes being disturbed when suddenly the leader burst into view within 3 paces of us!This leader only then acknowledged us with a slightly startled grunt and trotted sharply across our path to the opposite bank side.  The remaining wild boars, obviously by now fully cogniscent of our presence, went just a little further through the bushes and then followed their family leader across the track and up the other bankside. Check out the photos on this blog under the October heading  "And they just kept coming closer!" for all of the photos of this amazing wildlife encounter. 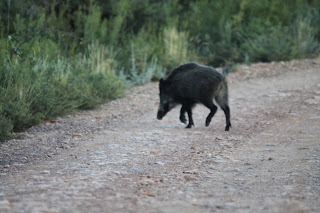 After this experience we could allow ourselves to breathe and move again, and share our excitement at such a close encounter. Later that same watch we  were able to give Terry his first  sight of an Iberian Grey Wolf albeit quite some distance away as this large predator moved in a straight line across the cropped fields on the far hillside. Terry could see the distinctive  movement  and single-minded purpose of this great predator as he was able to get onto it with his binoculars.  We were also delighted that Antonio senior and friend Jaime were with us for this first wolf sight of the tour. This wonderful evening ended for us with a beautiful double rainbow over the distant mountaintops.

Over the week, the weather improved and consequently,so did the sightings.  These culminated in an astounding morning with the full pack of 9 Wolves (5 adults and 4 young )in view for over an hour, greeting, playing and then we watched seven of them separate from the rest to lope off in a line across the valley. Time just flew by as Ros, Terry and John were treated to some of the best views here in wonderful morning light. 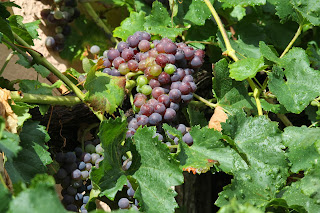 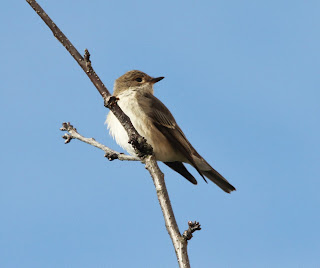 Our walk around our village of San Pedro was undertaken amidst heavy rainstorms, but we still could see Spotted Flycatcher, Pied Flycatcher and Robin whilst hearing a Nuthatch.The lichen-covered oak copses gave shelter where  several clear Wild Boar and Deer tracks could be seen at Boya, plus wolfscat, and at the Villardeciervos pond there were dragonflies plus Iberian Grey Shrike, Stonechat and Dartford Warbler.

The Boya/Cional road gave a wonderful display of two Golden Eagles being mobbed by a Common Buzzard with Carrion Crow and three young Hobbies also taking to the air in this rare moment of drier weather.  A large Red Deer Stag roared as he stood proudly on a ridge nearby and we also had good views of an Iberian Green Woodpecker. 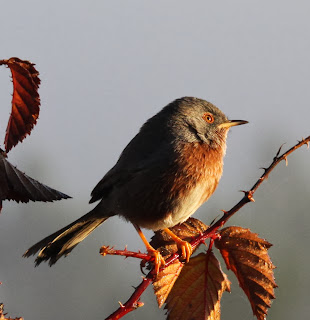 At Flechas, John saw,and Ros and Terry heard,  an enormous Wild Boar whilst walking behind the village. Both here and at Riomanzanas, Ros and Terry appreciated the chance to talk with the local people and they enjoyed learning about the local's reliance on subsistence farming/gardening.  The residents of these villages have a pretty low carbon footprint I suspect.

After exploring the architecture of the charming medieval market town of Puebla de Sanabria whose castle is well positioned to dominate the whole area, John, Ros and Terry enjoyed lunch at the scenic village of Ribeldelago, having taken time to study the monument to those unfortunate victims of the dam burst.  The names listed testify to whole families,indeed a whole community, wiped out in the tumult.  This is a beautiful area and luckily the clearer weather that afternoon allowed Ros and Terry to appreciate the quality of the scenery here plus admiring several Griffon Vultures and a Golden Eagle. 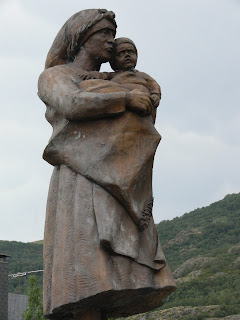 The highlight of the trip to the Douro gorge was at Fariza where despite the fact that the main viewpoint was under several inches of water, Ros and Terry were able to get good, close views of several Griffon Vultures perched on rocks close by.

Both John and I take our hats off to Ros and Terry who maintained a totally positive attitude throughout the days of torrential rain, and how pleased we were when that optimism was rewarded with the excellent Wolf and Wild Boar encounters, plus a couple of final days of good weather! Terry and Ros enjoyed the company at our hotel base, and were complimentary about every meal,however we all particularly appreciated the evening when friend Jaime took over the kitchen and Terry, Ros, John and I plus Antonio(s) were his guests for a lovely meal of tasty food and Spanish hospitality, all offered in the relaxed manner which I hope typifies the whole Wild Wolf Experience for Ros and Terry. 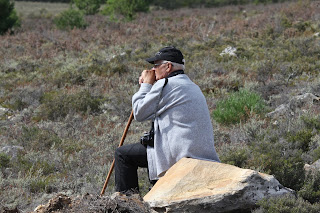 "We talk all the time about our time with you and how we enjoyed it - despite the weather.  We completely fell in love with the North and the area of Sierra de la Culebra. We were impressed with your knowledge and experience and hope we may meet again next year....Thank you both for a fantastic wild wolf experience.  We appreciate how lucky we were to see 8/9 wolves on the move...Best wishes and good viewing!"   Ros.
Posted by Wild Wolf Experience at 14:16