On a sunny  Monday morning 23rd September, John met Jo and Angus at Madrid Airport. They had enjoyed a couple of night's city life, but  were now ready for the main purpose of their visit to Spain...to look for the Iberian Grey Wolf.  The journey to our base in the Sierra de la Culebra allowed for a substantial amount of time to be spent at the excellent reserve of Villafafila, where Jo and Angus were treated to very good views of several Great Bustards 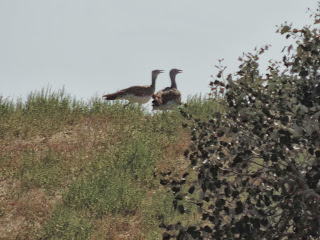 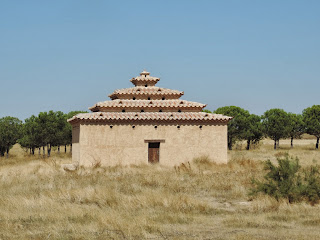 After settling into their hotel, it was time for the first wolf watching session of this tour.  The valley of la Pista was peaceful with only the occasional stag roar, and we were able to get our bearings for future watches whilst following 2 Stags with accompanying Hinds.

Dinner that evening had a truly local touch; it was cauliflower soup, Ternera de Aliste with Antonio's tomatoes, followed by a yoghurt dessert, plus of course the local tempranillo vino tinto. We always enjoy the home cooking with local produce that Antonio(s)serves us;  on this tour a favourite was the scrambled eggs with morcilla, followed by Secreto Pork and Antonio's lovely Lemon Mousse.

The wolf watch the next morning(Tuesday 24th September) was again at la pista and surpassed all expectations of Jo and Angus as in clear morning light they spent quite some time following 4 Wolves including one lying down yet still visible.  What a start! Also seen during this morning's watch was Short-toed Eagle, Rufous-tailed Rock Thrush, 5 Nightjars, up to 10 Wild Boar, Roe Deer and several large Stags. 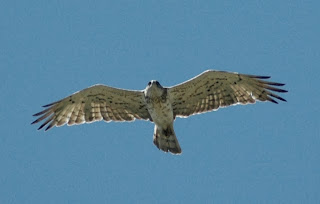 During the evening wolf watch, Angus followed a Griffon Vulture to see it roost with others of its kind by the firebreak track. A Hobby also flew across this track and we were interested in a young Stag running through the heather, but were unable to locate any lupine cause.

Other wolf watches this tour treated Jo and Angus to wonderful opportunities to watch wolves interact with Stags, Hinds and each other.They were able to watch the different reactions of Stags, Hinds and Roe Deer when Wolf was around, and to follow them along the zig-zag track, running through the low heather only to be tantilisingly lost to view in higher vegetation, and perhaps in the most memorable moment when the cubs greeted their returning mother with licking and playful body language.  In addition to the species already mentioned, our watches also gave us Fox, Crossbill and a pretty convincing Steve Coogan lookalike. 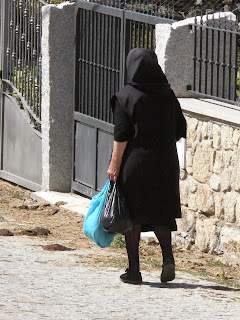 The 'celebrity' spotting theme seemed to continue throughout this tour as a very good likeness of Super Mario was pushing a wheelbarrow in the traditional Portuguese village of Aldeiea Nova.  Here the ladies go about their daily business in their traditional black garb, giving us a welcoming greeting as ever. We had seen at least 4 Red Kites around San Vitero on our way here, and as we headed down to our first gorge stop in a very peasant 31'C we were relieved not to be swathed in the heavy black tights and scarves which seem to be de rigeur here. The site at Aldeiea Nova was stark after the huge fire which had raged over both sides of this part of the gorge earlier this summer and the scarred land was laid bare and devastated. We look forward to charting the reconstructive powers of Nature over the coming months here. 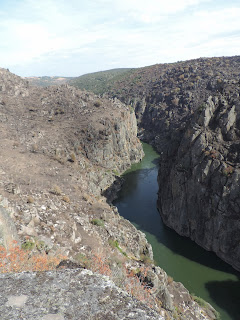 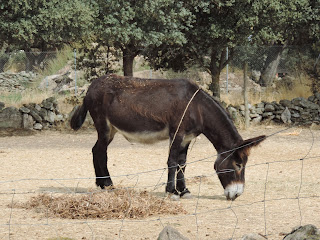 We noticed the traditional Aliste donkeys near the clapper bridge en route to Fariza. plus a pale-phased Booted Eagle.  At the stunning Fariza viewpoint where Jo saw Dali-esque features in the crags, we spent some time observing the colony of Griffon Vultures soaring in the air and roosting on the cliffs below and opposite us.The almonds were dropping from the trees just inviting us to taste them, so we obliged and enjoyed such delicate tastes which totally complemented the wonderful natural aromas reaching us from the herbs and bushes around us.


During our stroll around our base village of San Pedro after breakfast on Tuesday 24th September, we were delighted to notice Serin, Spotted Flycatcher and Pied Flycatcher amongst the birds in the surrounding woodland, plus 3 Griffon Vultures and a Black Vulture soaring above. 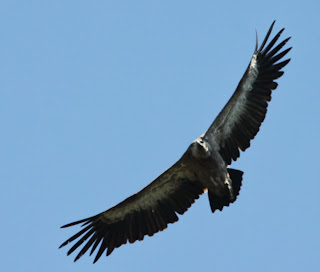 A short trip to Boya later that day was very rewarding with fresh wolfscat and tracks easily visible. Iberian Water Frogs hopped away from our feet into their pond sanctuary and we disturbed a Grey Heron by the water's edge. 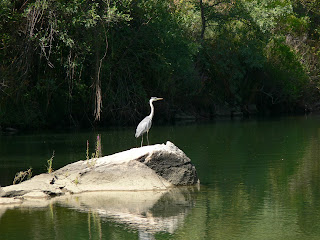 Everyone enjoyed the picturesque walk towards Pena Mira behind the village of Flechas, and Jo was delighted with her photographic evidence of a grand Stag at pretty close quarters. I am grateful to Jo for allowing me to use her photos as well as our own on this report, as my aged and normally sturdy Panasonic Lumix was proving a little temperamental, so "Thank You Jo!" 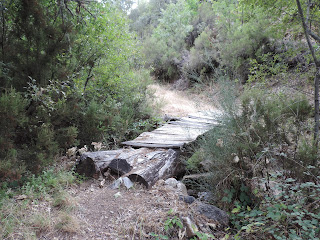 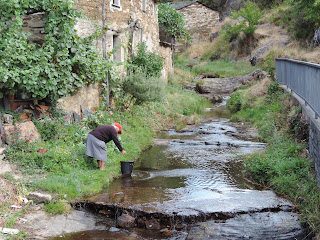 Villages such as Flechas and Riomanzanas show us a way of life unchanged for several decades and Jo and Angus also appreciated the walk behind Codesal, almost in the tracks of the wolves they had so enjoyed watching this tour. As well as clear, fresh wolf tracks, they also saw Stonechat, Peregrine Falcon, Hen Harrier and amazing views of a Hobby chasing insects.

Windscreen wipers at top speed for  all of the journey back to Madrid airport could not dampen the spirits of Jo and Angus as they returned from their successful and eventful Watching for Wolves Tour. No urgent plans for a Yellowstone trip needed any more - at least not for wolves- as everyone reflected upon the wonderful opportunities enjoyed this week to watch the pack at chase, at rest and at play. 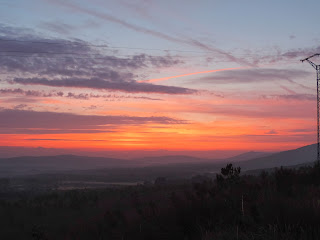 "Thanks for a great week and for looking after us so well...and showing us lobos!"    Jo.


Posted by Wild Wolf Experience at 13:16