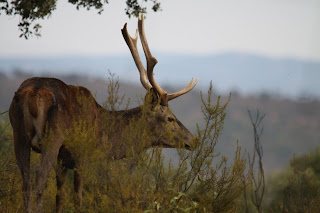 Temperature in the 30's and no rain since May...until this week when the forecast looked decidedly damp!  John and I set off for Malaga airport at 9:45am with low cloud looking threatening, and we just had to accept that the Kestrel we were watching was against a leaden grey sky as opposed the azure blue of previous weeks. Our clients  on this lynx tour were newcomers to all aspects of wildlife watching in general and had never visited rural inland Spain so we were hoping to give a good impression of the area...however fickle the weather patterns may be in mid-autumn. We collected Kieran and Lyz from their flight, and on our journey out of Malaga, the weather and hence our spirits brightened.  We enjoyed pointing out Grey Heron, Red Kite, Blackbird, Collared Dove and House Sparrow, and Lyz saw her first black Spanish Bull  White villages nestled amidst acres of olive groves and the oleander bushes were still flowering, plus ...the Visitor Centre was actually open!  This was most useful as it enabled Kieran and Lyz to learn about the different wildlife we hoped to see in the Sierra de Andujar. 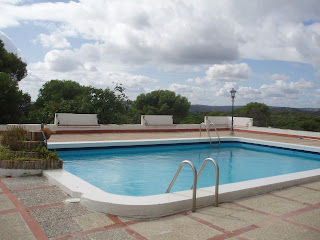 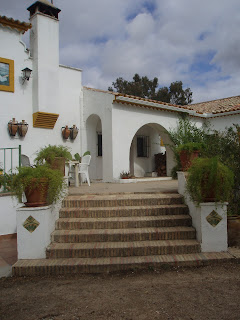 Our way up to our hotel was punctuated by several sightings of Azure-Winged Magpies...a bird which never fails to impress and which is abundant in this area of Spain 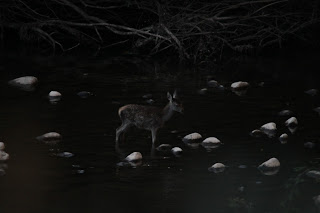 After settling in and a light tea, we began our first Lynx watch at Encinarejo at 6:00pm where recent showers had resulted in herbs and pine releasing their heady scents to the air.  We got good, close views of several Red Deer, Stags, Hinds and Fawns, including one intrepid little Fawn crossing the river.  Girded by a double rainbow, and to the frequent splash of large fish jumping, we saw White Wagtail, Rock Sparrow, 2 Kingfishers ( much to Lyz's delight as she had always wanted to see a kingfisher...then just like buses they all come at once...), 9 Cormorants flying in V formation, Moorhen and later, Pipistrelle Bats.

Homemade onion soup, seafood paella and choice of homemade puds was appreciated by us all.  To a couple more used to city breaks, this had been quite an unusual day, but the peace and beauty felt when we just sit still and let the evening draw in around us as it has done for generations, was not lost on Kieran and Lyz. 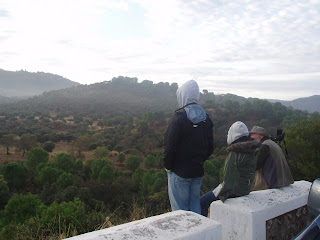 The weather was against us as we watched early morning rain over an 7:30 breakfast. Fairing up at 8:20, only to pour down again at 8:44, and this was the pattern for the day.  We just had to make the best of it...which indeed we did.

Still raining heavily at 10:00, but we had seen good, close views of family parties of red deer,  Great Tit,  Blue Tit, Red Kite, Jay and heard an Iberian Green Woodpecker. Cormorants, Drake Mallard and Grey Heron were all in the river valley.  Red-legged Partridge scurried along the tracks and a perky Dartford Warbler made an entrance.  The stag rut had apparently been delayed because of the excessively dry conditions,so of course it was now in full-throated intensity.

Lunch was local cheese and the melt-in-the-mouth Iberico ham and time shopping in Andujar was time well spent during rainstorms, but as the sun broke through in early afternoon, John pointed out the amazing drama of a Spanish Imperial Eagle harassing a bull making it race headlong down the hillside.  The eagle was duly mobbed by 2 Ravens and we felt honoured and excited to witness such a scene.  We were able to follow the activity closely for 10 minutes at least, after which we enjoyed Golden Eagle, Great Spotted Woodpecker, Red-legged Partridge and more sedentary bulls eating from their traditional granite feeding bowls/troughs near La Lancha. 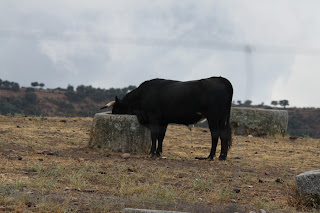 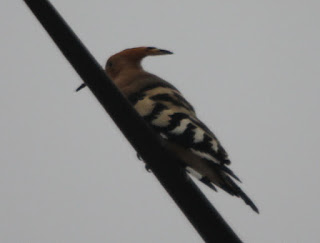 While John, Lyz and myself were following  a Mistle Thrush eyes right, Kieran was amazed at his first sight of a Hoopoe to the left of us.  The sheer, obvious eccentricity of this bird means that you always remember your first Hoopoe!

Checking out views of Black Redstart and Robin en route, we paused for a picnic during a window of clear weather at 3:30 to be rewarded with 1 Golden Eagle and about 30 Griffon Vultures circling and checking us out. 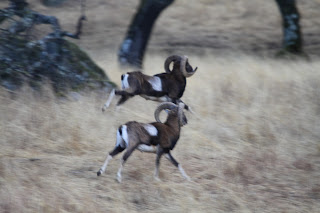 At the embalse de Jandula, we spotted 2 more Griffon Vultures, Crag Martins, 3 Grey Heron, Great Crested Grebe, 5 Cormorants and 2 Kestrels. The journey back to our base for the evening lynx watch reaped an Iberian Green Woodpecker, Woodlark and 3 Mouflon.  The elegant, Spanish, thoroughbred Horses grazed alongside the Bulls, their adversaries in the bullring and we were treated to the sight of about 20 Red Deer crossing the road. 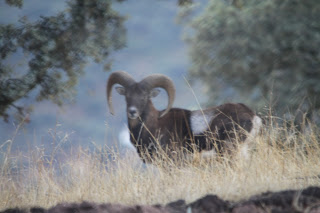 Although lynx had been reported 30 minutes earlier that day at Encinarejo, there was no evidence of its continued presence while we watched that evening but over a tasty dinner of pumpkin soup, veal casserole and apple pie, our talk wasall about our avian sights, particularly the Spanish Imperial Eagle and Griffon Vultures...and of course, the Hoopoe too!  After dinner, we were fascinated to learn the identity of the female Iberian Lynx  John has photographed on several previous occasions and to learn of the excellent work Lifelince has done in pursuance of their aim to consolidate the presence of the Iberian Lynx. The elegant female lynx which appears in several  pictures in our website can now be identified as Carranca, born in 2006, and the male was probably Lorca.  Both are still active in their respective territories. 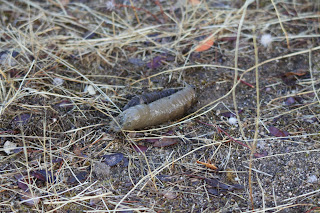 8:30.  The river valley was swathed in mist as we took our places, noting quite a few Rabbits, Deer, the Dartford Warbler, Sardinian Warbler, Chaffinch and a particular Spotless Starling with an impressively accurate mimicry of a Golden Oriole! The atmosphere was still and tense...when an acorn fell it startled us!...when I spotted a shape across the river  whose movement and silhouette told me "Lynx".  However I was defeated by excessively misty conditions and was unable to make a definite identification.  Within a few minutes  the same area produced an earsplitting cacophony of Jay and Magpie shrieking, plus a frenzy of activity with Azure-winged Magpies, unfortunately  as this was all in the blanket of  mist we could only assume the presence of lynx without any possibility of a view.

Later, when stalking the paths alongside the river, and enjoying much Kingfisher activity, we found extremely fresh lynx scat and tracks; evidence which served to consolidate our view that lynx had been there that morning but we had been denied a sighting by the mist.  Just to see such recent evidence was thrilling however, and we spent a long time savouring the atmosphere with the almost permanent calls of the rutting stags plus a rewarding, albeit brief, sight of Otter and Male Sparrowhawk. 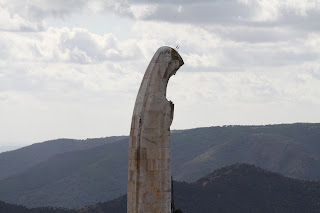 Our pilgrimage to the Sanctuario de la Virgen de Cabeza felt even more eerie when we went to view the cloisters, only to find them totally gutted by a fire only the day before.  Whatever your personal beliefs, to stand in that blackened husk with the smell of smoke still clinging to the remnants of a roof now totally open to the elements, looking at the few remaining, charred photographs and "L" plates, this created an even stronger aura of uneasy solitude.  However, not to be discouraged, we noted in the corner a set of crutches freshly offered and obviously no longer needed  - placed here in the cloister since yesterday's inferno, so perhaps the power continues undiminished. Blue Rock Thrush, Black Redstart, 2 Griffon Vultures and a party of Fallow Deer were out and about, thereby outnumbering the people in the coffee shop at the camping site in the village. 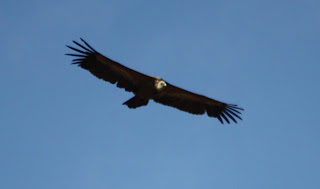 Dinner was chicken, chips and salad after a starter of venison pate and  broad bean pate served with grilled aubergine and courgette.  This was followed by a selection of homemade desserts, and we retired after a full and interesting day. 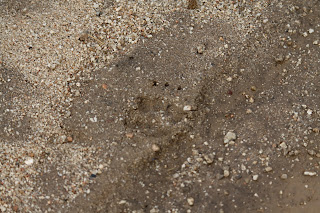 
What a beautiful morning with the sun breaking through some fascinating cloud patterns watching stags going head to head, and getting the scopes on Iberian Green Woodpecker, 6 Hawfinch and a female Blackcap.  Under a sky dotted with Cormorants flying in their V formation, Lyz spotted an excellent, fresh Badger track on the bridge and lynx scat from various times was also found. 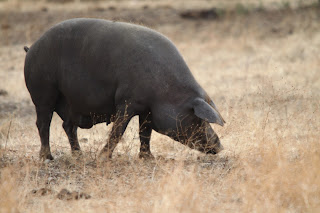 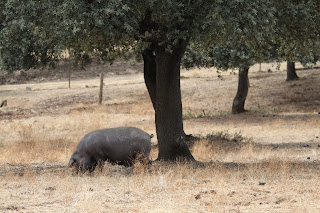 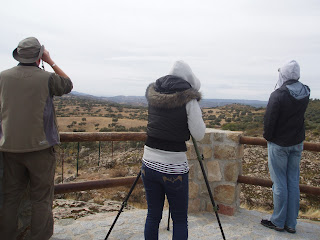 More Iberico ham fuelled Lyz's desire to see the black pigs which spend their time foraging free range amongst the Spanish oaks eating the acorns from which this delightful taste sensation originates.  En route, Kieran was pleased to get good views of Griffon Vultures and we  found that the pigs were just as interested in us as we were in them. Our stop at a Mirador to overlook the Sierra - with the almost expected Griffon Vultures - plus Mistle Thrush and Stonechat and several deer parties, once again gave us the chance just to stand, watch and listen...hopefully  to be remembered when the hurly burly of city life returns.  However, Lyz spent a lot of her time trying to fend off the attentions of over-amorous, mating flying ants. Hmmm. 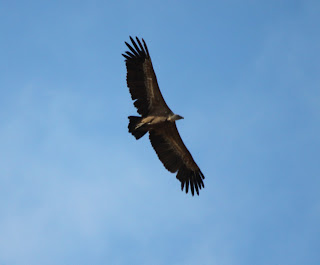 We then enjoyed a short trip out of Andalucia into Castille y La Mancha noting the importance of the cork oaks to the area. Surely no cork will pop without Kieran or Lyz thinking of this age-old, totally sustainable practice and memories will flood back.

Back in the Sierra de Andujar,  "Fox?" queried Lyz;  and sure enough she had spotted 2 foxes out mousing.  One disappeared quickly but the other, although obviously aware of our presence, continued with his successful hunting exploits.  It was good as ever to watch a wild creature go about its business, and spirits were high at dinner that night.  The meal was a spaghetti starter, followed by salmon steak and salad with fresh fruit to finish. That night when we showed Mercedes the photographs of the fox, we were congratulated because the fox is outnumbered, in fact, is driven out, by the much more territorial lynx. 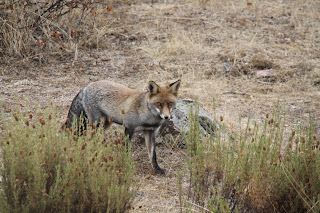 
Heavy overnight rain cleared by breakfast and our hopes were raised when we saw movement over the bridge...but alas only a deer.  Our poll this morning was 2 Grey Heron, Cormorants, Grey and White Wagtail, Blue Rockthrush, Black Redstart, Kingfisher, 6 Griffon Vultures and Otter.  The heavy early morning rain had put paid to finding any lynx track or scat.

Farewells to Roland and Mercedes, our excellent hosts, were more an "au revoir" than "goodbye" and the rain began again as we enjoyed our last lunch of the tour.

The journey to Malaga had much to offer us with several Cattle Egrets near Canal del Rumblar, plus Kestrel, Red Kite and Common Buzzard.

We all agreed that, although we had not had any definite lynx sighting, the 5 days had been full and personally John and I enjoyed the challenge of seeing our 2 companions emerge from complete novice into enthusiastic students of wildlife. I think it is best summed up in Kieran's words:- 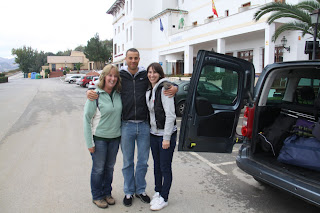 "We  both thoroughly enjoyed the trip. It opened our eyes to another way of holidaying....Thanks again...for a very memorable time."

Email ThisBlogThis!Share to TwitterShare to FacebookShare to Pinterest
Labels: Looking for Lynx Oct 2011