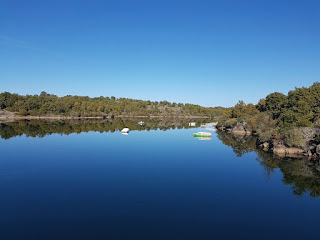 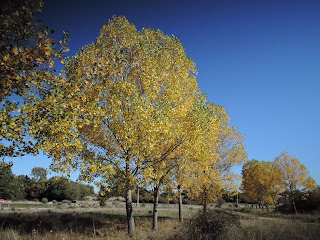 October colours are resplendent in the sharp autumn light.  We have enjoyed some lengthy wolf sightings in the variety of weather conditions this autumn month traditionally offers us, in mist, rain, but overall in clear sunshine without heat haze or undue vegetation interference.  John is now regularly putting his videos and photos directly onto the Wild Wolf Experience Facebook page almost as they happen and I know many of you really appreciate this.

Our first Watching for Wolves tour of October welcomed Adam and Pamela to the Sierra de la Culebra - one of the few parts of the world not previously visited by this well-traveled couple!  However, in all their travels, grey wolf had eluded them hence this tour.  Fresh wolf scat was seen on their first afternoon on 16th October and further evidence of being in wolf territory was noticed in other areas during tracking over the next two days.  Tracks of any species other than the hooves of wild boar and deer were very difficult to locate owing to the incredibly hard, dry ground.  During the tour, John concentrated on one area of wolf territory, hoping that Adam and Pamela's quest could be fulfilled here in the Sierra de la Culebra.  Several grand stags were seen with strong looking hinds in tow, plus clear views of wild boar rooting in the nearby fields. Roe deer barks were also heard.  The presence of black and griffon vulture provided a signal that a kill may be in the woods and we could all spend time watching three hen harriers gracefully quartering over the heather along with spotting rock bunting, Iberian green woodpecker, and a lively Iberian hare along the road.

A large ladder snake was out sunning at Cional as Adam, Pamela and John were walking around the lake and this was topped by an encounter with a Lataste's viper the next day, where no-one wanted to get too close!


But for the first five wolf watches the wolf was not showing and excitement/tension/even resignation began to feature in our conversations. But on a clear Wednesday morning, October 19th, Adam and Pamela saw their target; a species which proved so elusive at other venues.  A large Iberian wolf suddenly came into Adam's view as it sniffed and sauntered across a ploughed field, then trotted away along the forest track, stopping occasionally to sniff the air or even to lie down, before going into the nearby wood. But what a fabulously clear and lengthy sight! This was certainly a memorable and exciting day for Adam and Pamela as they were treated to another good wolf sighting that evening of Wednesday 19th, when an individual emerged at 19:15 and we were all able to watch it for 45 minutes.  Adam and Pamela's final wolf watch, on the morning of 20th October, provided shorter views of a lone wolf deeper into the forest, but what wonderful wolf watches! Adam and Pamela could return to their homes and family with mission certainly well accomplished!

The next day, 21st October, brought Graeme and Rhona back to the Sierra de la Culebra after their visit during May/June 2015. Their first wildlife sighting this year was certainly a dramatic one as they found themselves very close to a large Lataste's viper down our well! 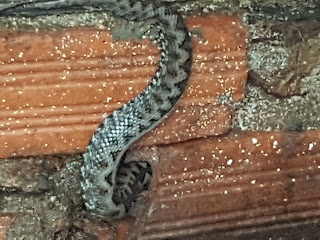 Wet and foggy conditions did not deter Graeme and Rhona and certainly the wolf tracks they found the next day were fresh, which was very exciting. At 10:00 on the morning of 23rd October we were all able to follow an alpha female wolf which had obviously just fed, as it moved slowly along the forest track to be lost amongst the pines until Rhona spotted it again further out to the heather.  Both Graeme and Rhona were delighted to improve upon their more fleeting view from last year's visit, and were determined to keep looking at every opportunity the inclement weather afforded. We were also interested on one occasion to observe a large black vulture for quite a long stretch of time as it lurched about ungainly on the ground by the pine tree. 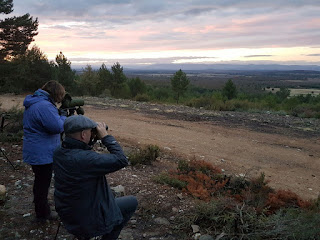 This attitude lasted until the very final moment of their last wolf watch, on the evening of 25th October. In the encroaching dusk Rhona's attention was drawn to a shape emerging onto our track from the pines which skirt the track edge, and it was a wolf! The dark shape moved soundlessly across the track to become lost in the darkness of the wooded hillside, but what a fitting finale to Graeme and Rhona's series of wolf watches with us!

A day visit to the Douro Gorge gave us two golden eagles, griffon vultures and crag martins with three azure-winged magpies in woodland on the journey back.  Tuesday 25th October was a better day for walking with bright sunshine and no rain or fog and the lake walk at Cional offered up some wonderful sights of Dartford warbler, Iberian green woodpecker, stonechat, grey heron, Iberian chiff-chaff, grey wagtail, kingfisher, blue tit, grebe, cormorant, black redstart, red kite and goshawk.

As Graeme and Rhona returned to Hitchin, Chris was flying in from Alice Springs, Australia for his Watching for Wolves tour. A visit to Villafafila gave Chris good views of 50+ great bustards - a first on his first morning! Also seen here were shelduck, shoveller, tufted duck, teal, gadwall, wood sandpiper, lapwing, red kite, hen harrier and marsh harrier.  On his first full day in the Sierra de la Culebra, Chris was able to see very fresh wolf scat in a promising area where red kites, griffon and black vultures were much in evidence.  John was able to video this black vulture sunning and preening itself on a treetop


They also were able to record this American mink  jumping from rock to rock at Cional lake.


But the best was yet to come! It was soon after scopes were set up during the evening wolf watch of 28th October that John noticed a female wolf trotting along a track. As Chris enjoyed this, his first lupine view, the wolf turned to walk through the heather which afforded them even better views.  This female wolf seemed to be moving with a purpose until Chris and John noticed a change in her pace and body language.  After slowing to a walk her ears went against her head and her tail began to wag enthusiastically as she greeted her two cubs who emerged from the side of the heather.  From then on, throughout the remaining daylight-to-dusk- viewing time John and Chris could watch the interaction between these three pack members. Please check out our Wild Wolf Experience Facebook page for the excellent video of this event. What an amazing opportunity and Chris felt this result truly justified his long journey to get here.

The next day saw temperatures rise to 24'C and John and Chris spent much of the time tracking around the local villages where locals were making use of the pleasant weather to prepare their firewood for the oncoming winter. Fresh wolf tracks were seen, along with blue tit, great tit, dunnock, Iberian water frogs and yet another Lataste's viper, which was aiming to make use of this warm weather, just like the locals. In this photograph you can see the piles of firewood behind Chris, ready for sorting in time for less welcoming temperatures! 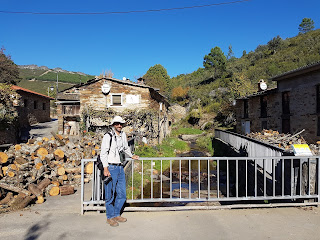 The trip to the Douro gorge gave Chris and John excellent golden eagle and griffon vulture sightings along with crag martins, but Chris was particularly delighted to see his first woodlark plus Sardinian warbler. The evening wolf watch meant that Chris had his first view of wild boar which was seen moving along the nearby firebreak and then heading off through the low heather, and John saw a badger later that night.  So  various interesting species, including red fox and several good views of red deer, had been seen throughout that day and this pattern just didn't seem to stop! On the way to the airport Chris was delighted to spend some time watching two otters and one American mink plus some extremely close views of great bustards in flight, on his truly memorable return journey.

So an eventful month busy as ever and John has been delighted to share such a variety of wildlife sightings with clients throughout October. From the video of wolf seen by John  on the 1st October to the otters and mink with Chris on the 31st, there has been an amazing array of experiences to share this month in this area of Spain so rich in its biodiversity. 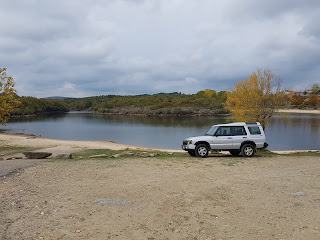 Margaret . ( All photos and videos in this blog entry were taken in the Sierra de la Culebra in the wild by John during October 2016)
Posted by Wild Wolf Experience at 05:44