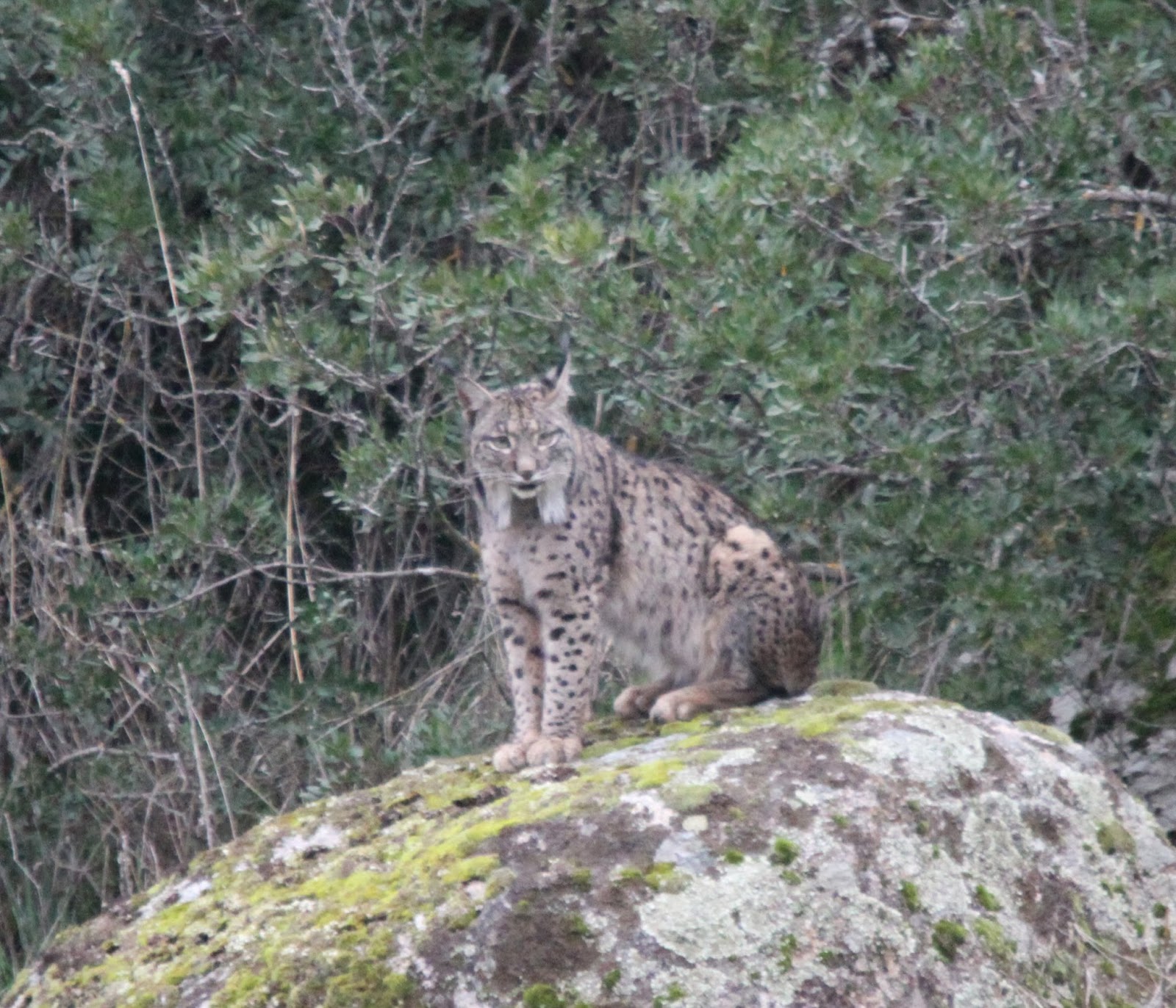 As John, Pernilla and Mikael had departed Madrid airport at about 10:30, they arrived at their base in Sierra de Andujar in good time to settle into their rooms before setting off on their first lynx watch. Although no-one was expecting excessive heat in early February, it was surprisingly cold with the temperature averaging 2'C,but it was a very promising first watch.     Red Deer and Fallow Deer were out in good numbers 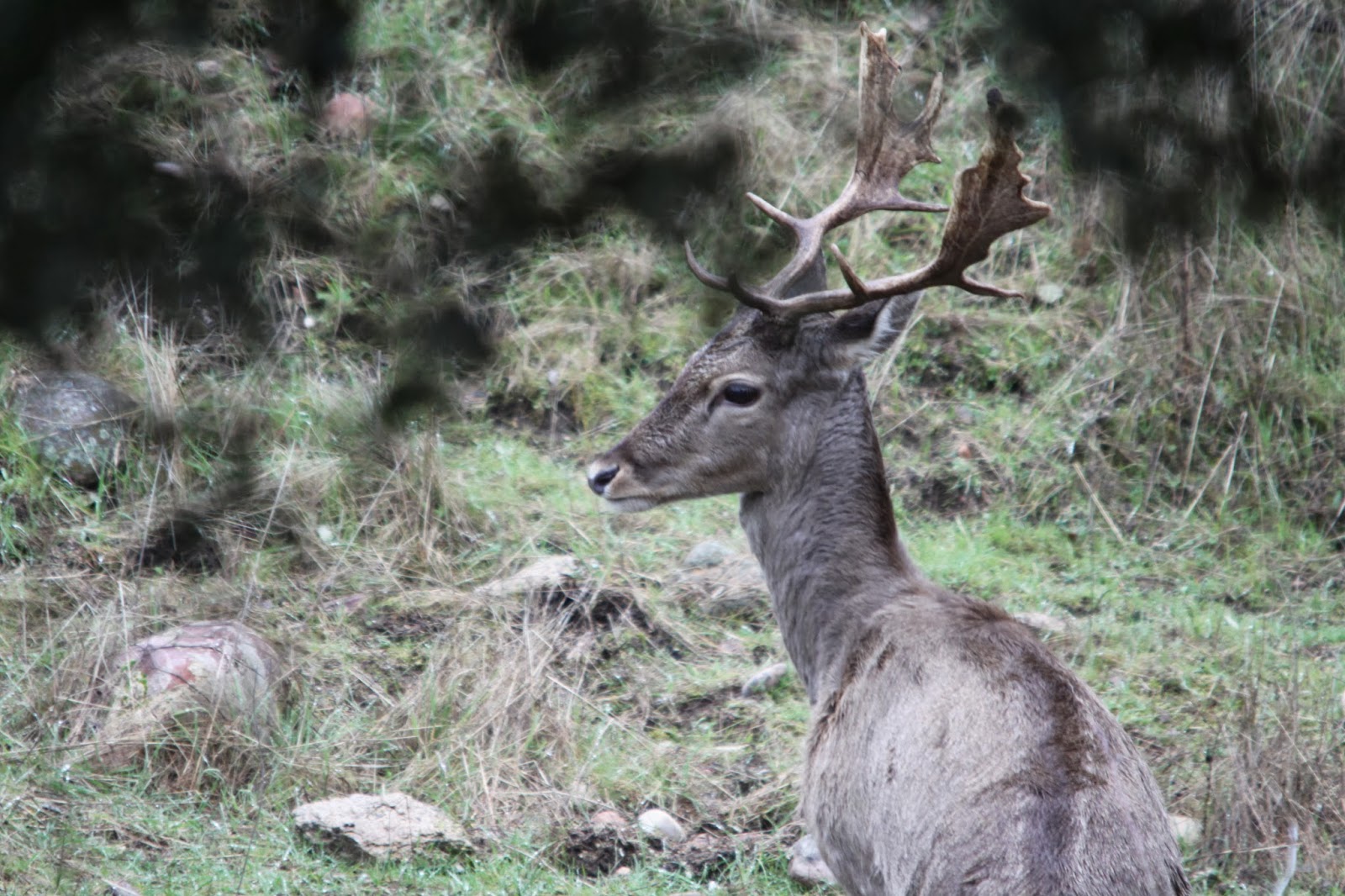 and by the end of the watch, the bird list was already impressive with good views of Azure-winged Magpie, Cattle Egret, Sardinian Warbler, Spanish Imperial Eagle, Golden Eagle, Sparrowhawk, GriffonVulture and Red-legged Partridge.  As the light began to fade,John, Pernilla and Mikael were treated to excellent views of a family of Wild Boar, 3 adults with several distinctively striped young.  What a wonderful start to the tour! 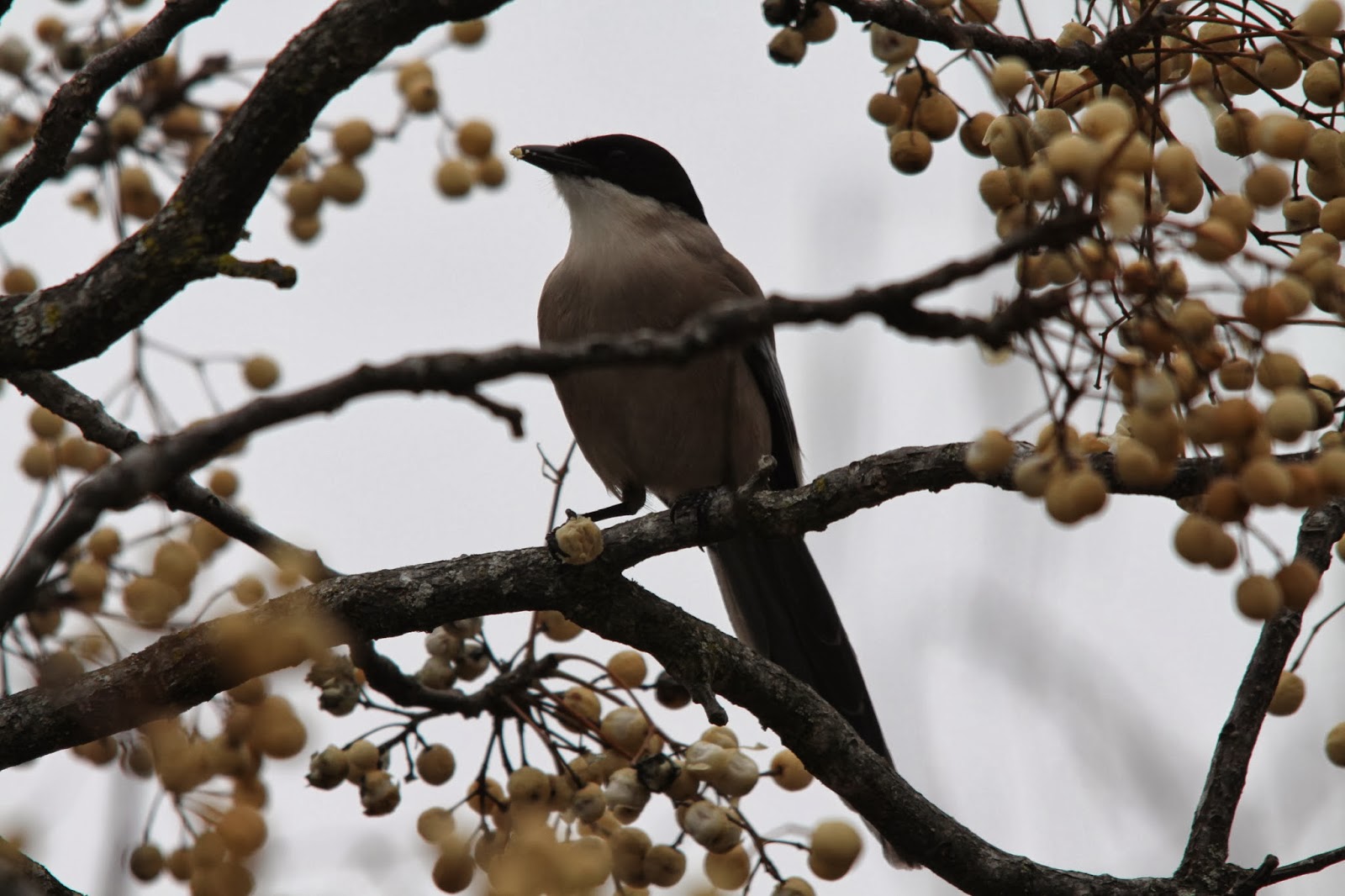 They got good close views of the normally wary Azure-winged Magpie as they fed on the fruits outside our restaurant at lunch-time.

The weather became clearer and milder for the rest of the week with the exception of torrential rain on Saturday 8th February, and Pernilla and Mikael were treated to some wonderful wildlife moments. 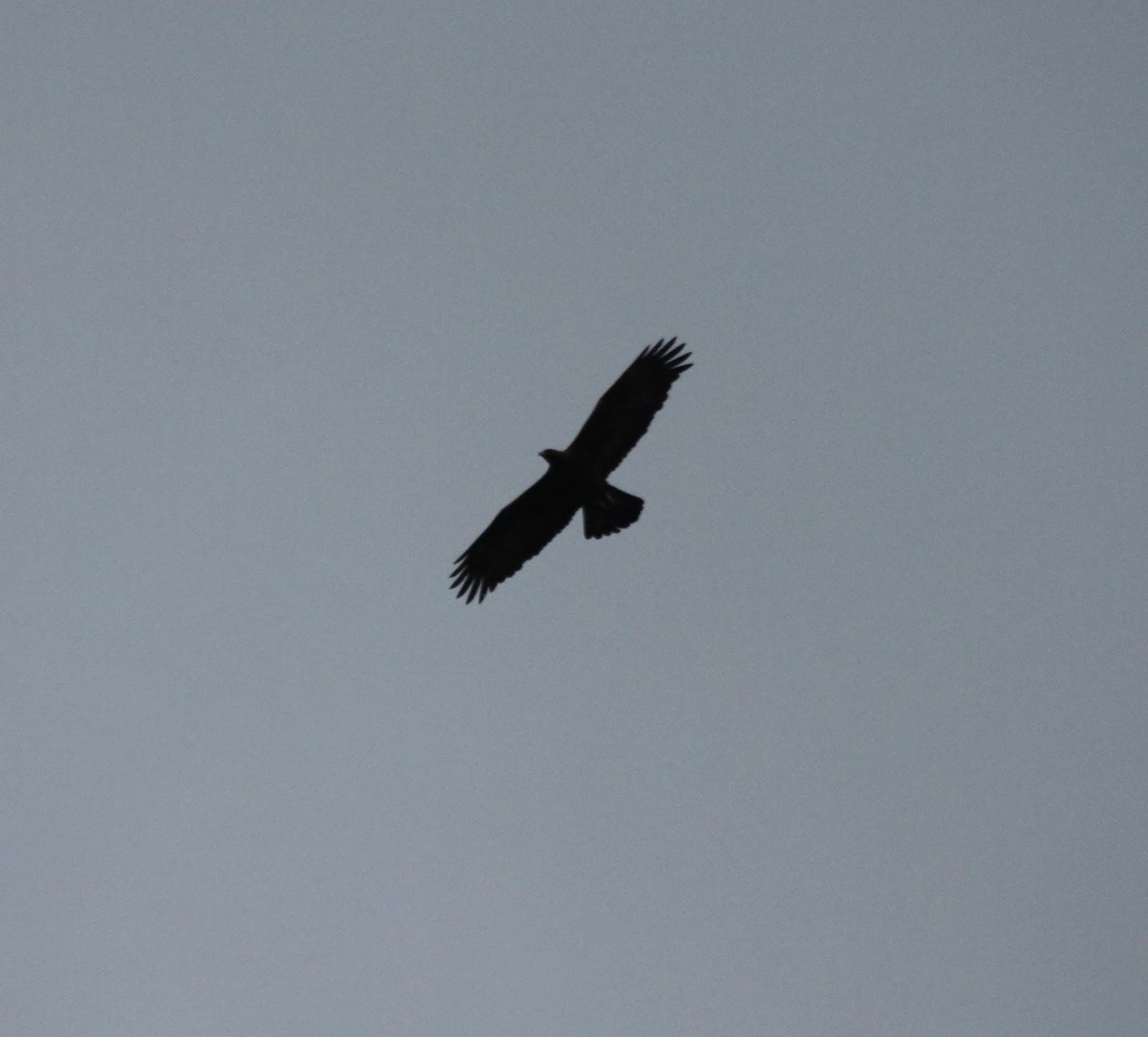 Everyone had a wonderful time watching two Golden Eagles talon grappling at La Lancha with accompanying views of 150+ Griffon and Black Vultures in the air.plus one Peregrine Falcon. 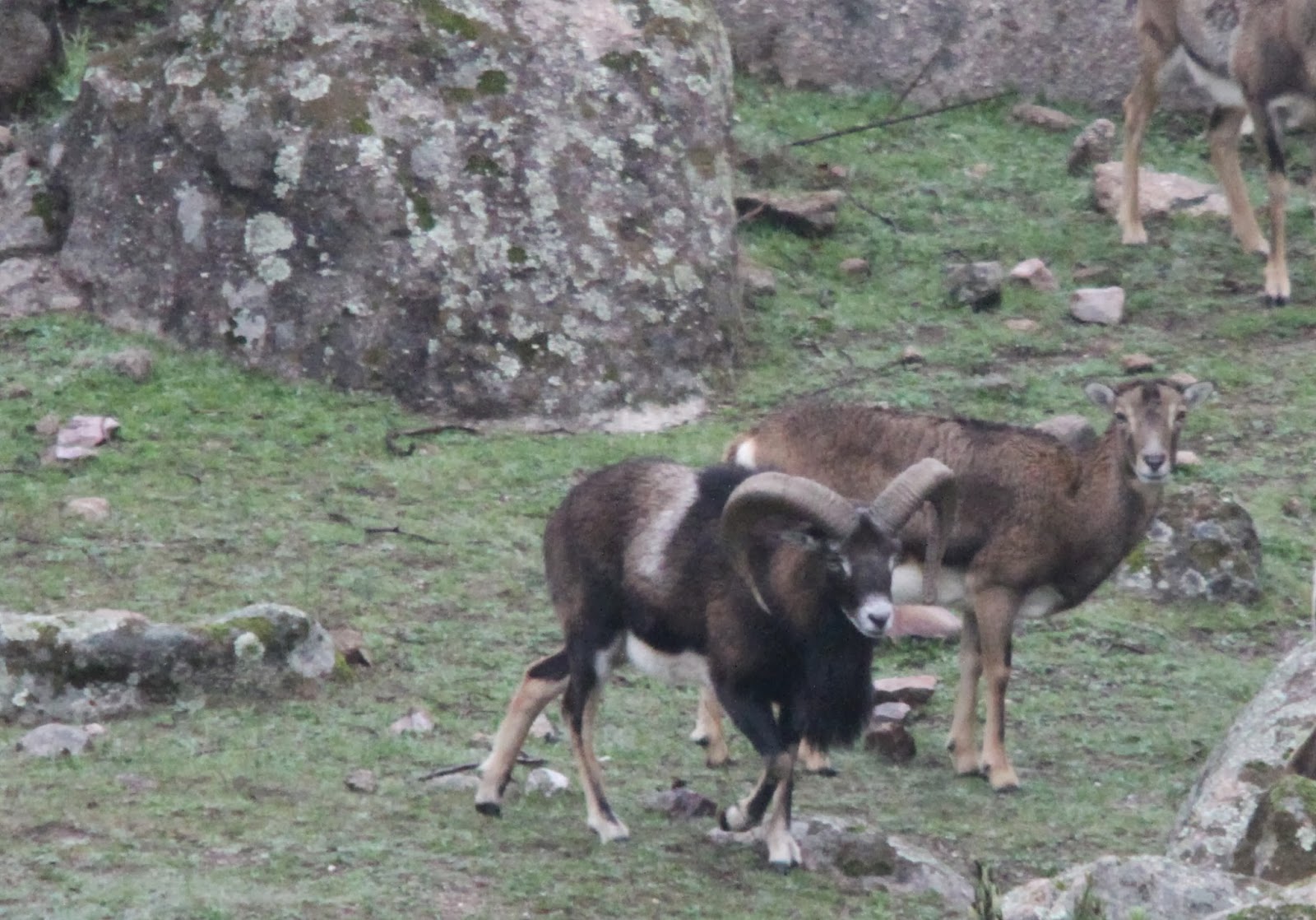 A herd of Moufflon were spotted close by, and the ram was sporting magnificent horns as he kept encircling his group of females, all looking in peak condition.  This was counteracted by a sole Spanish Ibex nibbling in relaxed fashion on the sheer cliff face.  As they entered the cave, Pernilla and Mikael were able to shine a torch on the Greater Mouse-eared Bats and the Daubentons bat above their heads.


They were lucky to see Eurasian Otter on several occasions;  on one particular occasion catching a fish and bringing it ashore to eat amongst the rocks. Pernilla was also delighted to catch up with the European Kingfishers which were to be seen flying up and down the river. 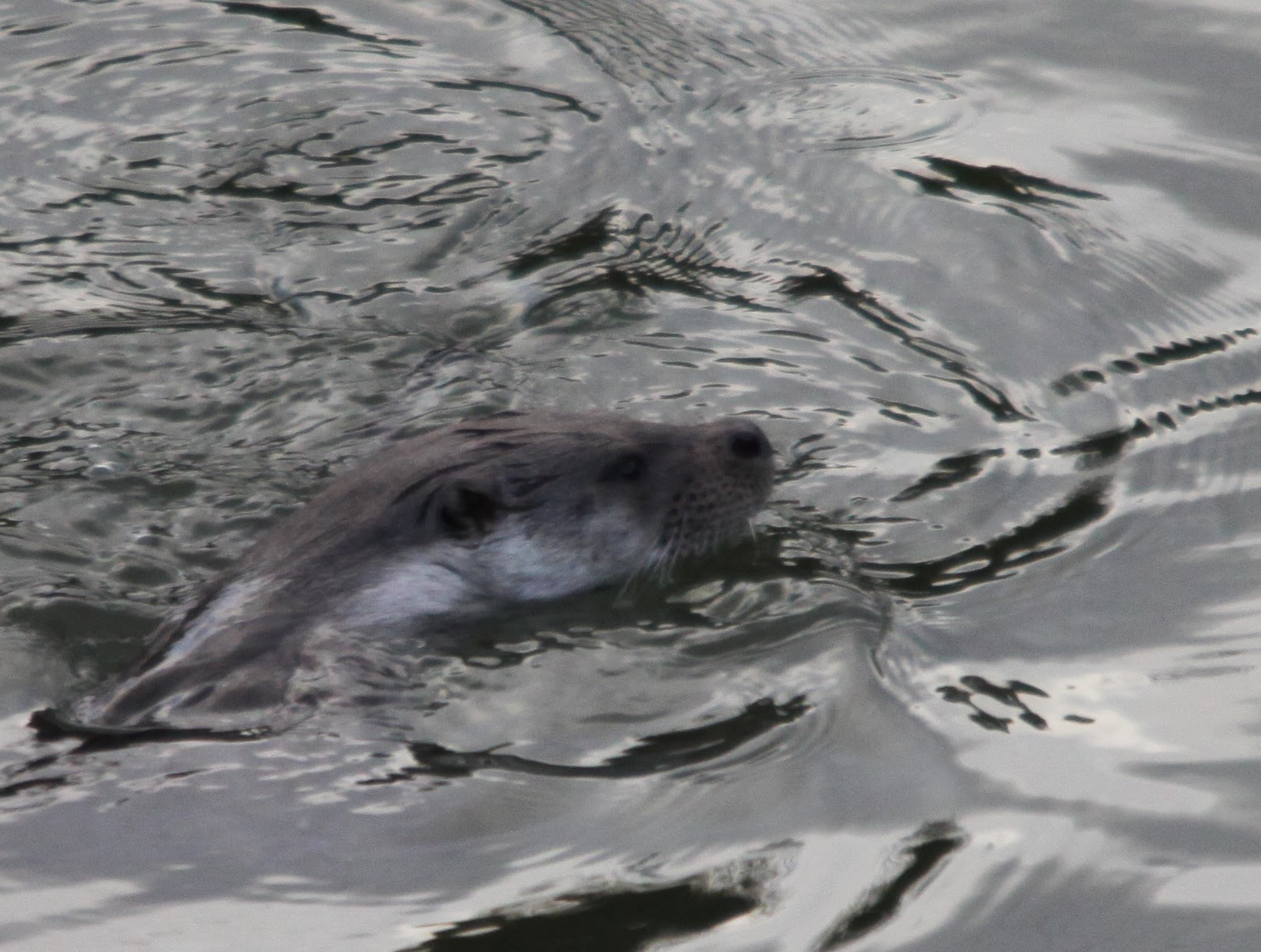 From their viewpoint they also caught sight of another successful fishing foray - human this time. A young Spaniard  landed a reasonably-sized fish and his delight showed no restraint.  Using his mobile phone, our successful angler posed with broad smile for several "selfies"with his new-found fishy prize featuring in each one; cheek to cheek,then wrapped around the neck, then fish hoisted aloft with pride, and he even enlisted Mikael's bemused help to ensure a really good photograph before returning his prize catch to the river. 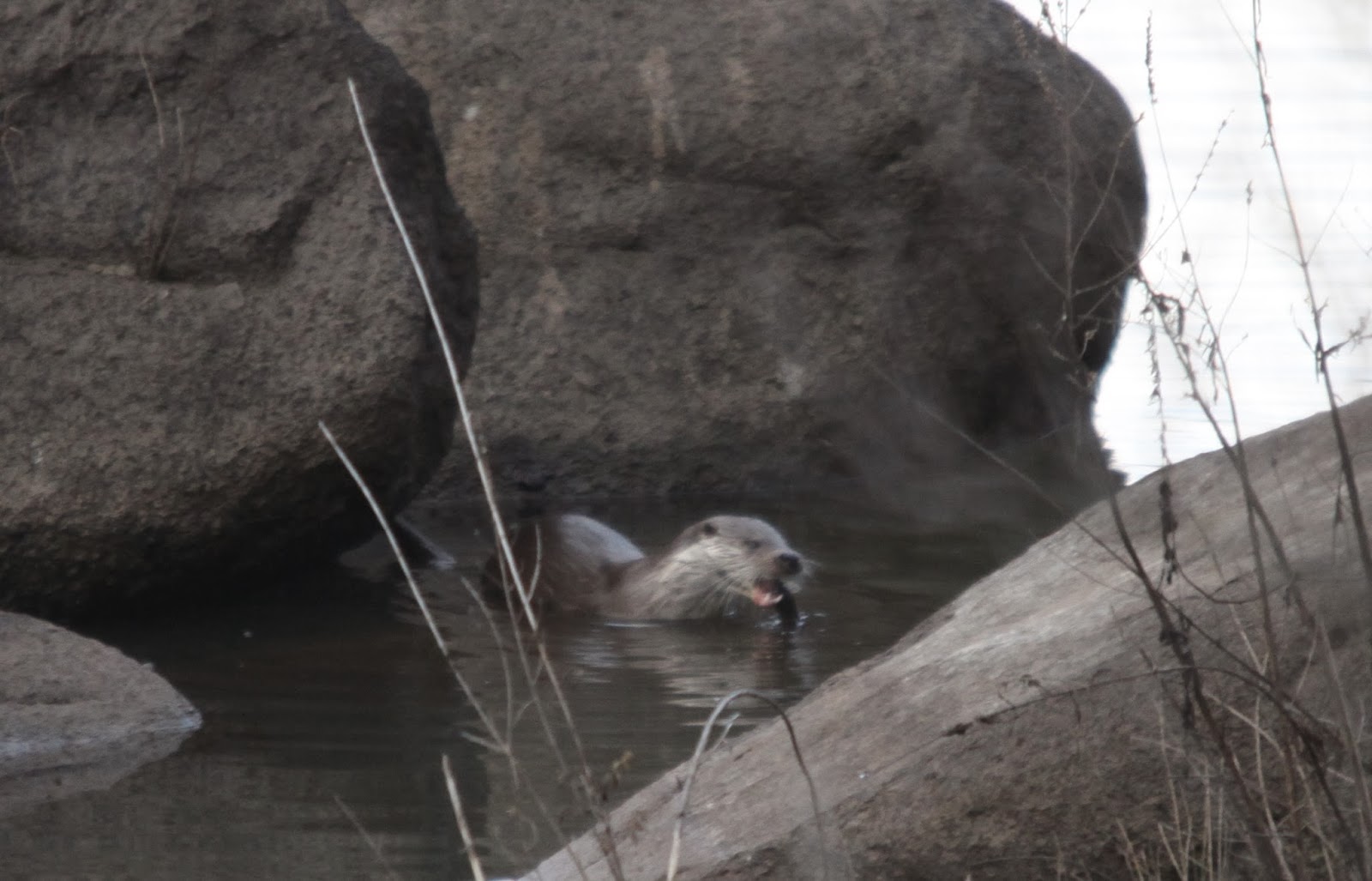 A visit to the north of the park, where wolves are known to live but are rarely seen, also incorporated time spent at the Sanctuario de la Virgen de la Cabeza, which dominates the skyline in the National Park and demands our attention. This is where the Blue Rockthrush and Crested Lark were seen, along with several Griffon and BlackVultures, circling high over this atmospheric landmark.

It is obvious from what has already been reported here, that this week offered stunning views and some memorable wildlife moments, but for John, Pernilla and Mikael the real highlights were the fantastic views of 3 individual Iberian Lynx, which worryingly accounts for approximately 1% of the entire population of this highly endangered  mammal. Only a small number of rabbits were observed in the park, which is a concern as this is the staple diet of the Iberian Lynx and the rabbit population has been severely reduced due to disease. 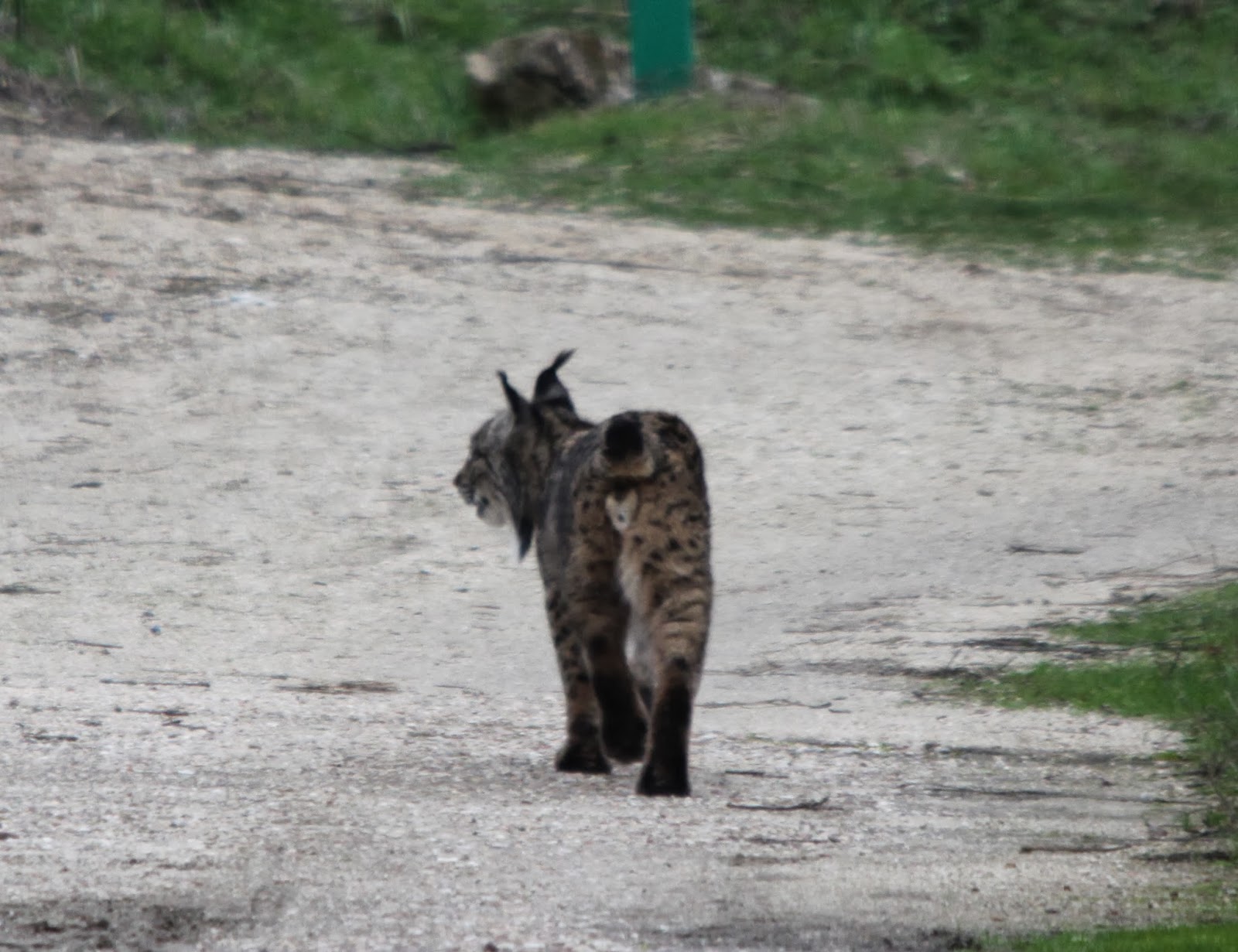 The first lynx encounter was during the evening watch of Tuesday 4th February. After noticing very fresh lynx tracks and scat beside the bridge, all three were looking over the bridge hoping for otter sightings.  Pernilla caught a movement out of the corner of her eye and she calmly drew John and Mikael's attention to a large Iberian Lynx which was walking on the bridge about 15 metres away. Mesmerised for several seconds, all three watched hardly daring to breathe, and they took in the size and power of this magnificent feline.  It walked off the bridge into the rocks below, where it calmly climbed to the top of a rock and studied them from its lofty viewpoint.  Tremendous! And so close!

But the next encounter was even closer.

As John drove along the road at 13:30 the next day Wednesday 5th February, a young Belgian couple were standing by the roadside and excitedly explained that they had disturbed an Iberian Lynx on the road and it was now presumed to be in some bushes. After 2 or 3 minutes a female Iberian Lynx came out and crossed the road in front of Mikael and John at a distance of no more than 4 metres. It then raced across the road and set off in hot pursuit of an unsuspecting rabbit, narrowly missing catching it with its front right paw. We have the action shots here: 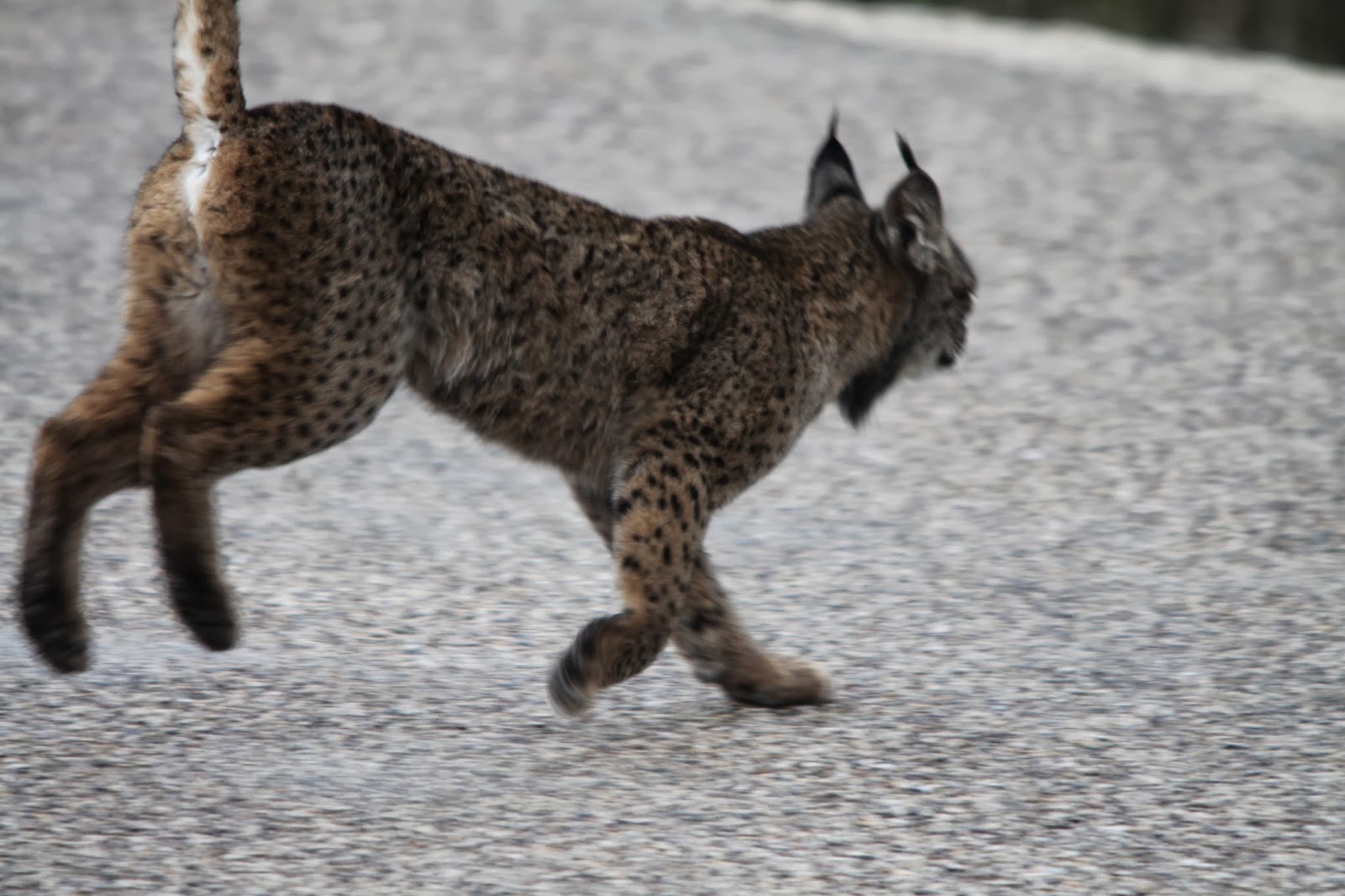 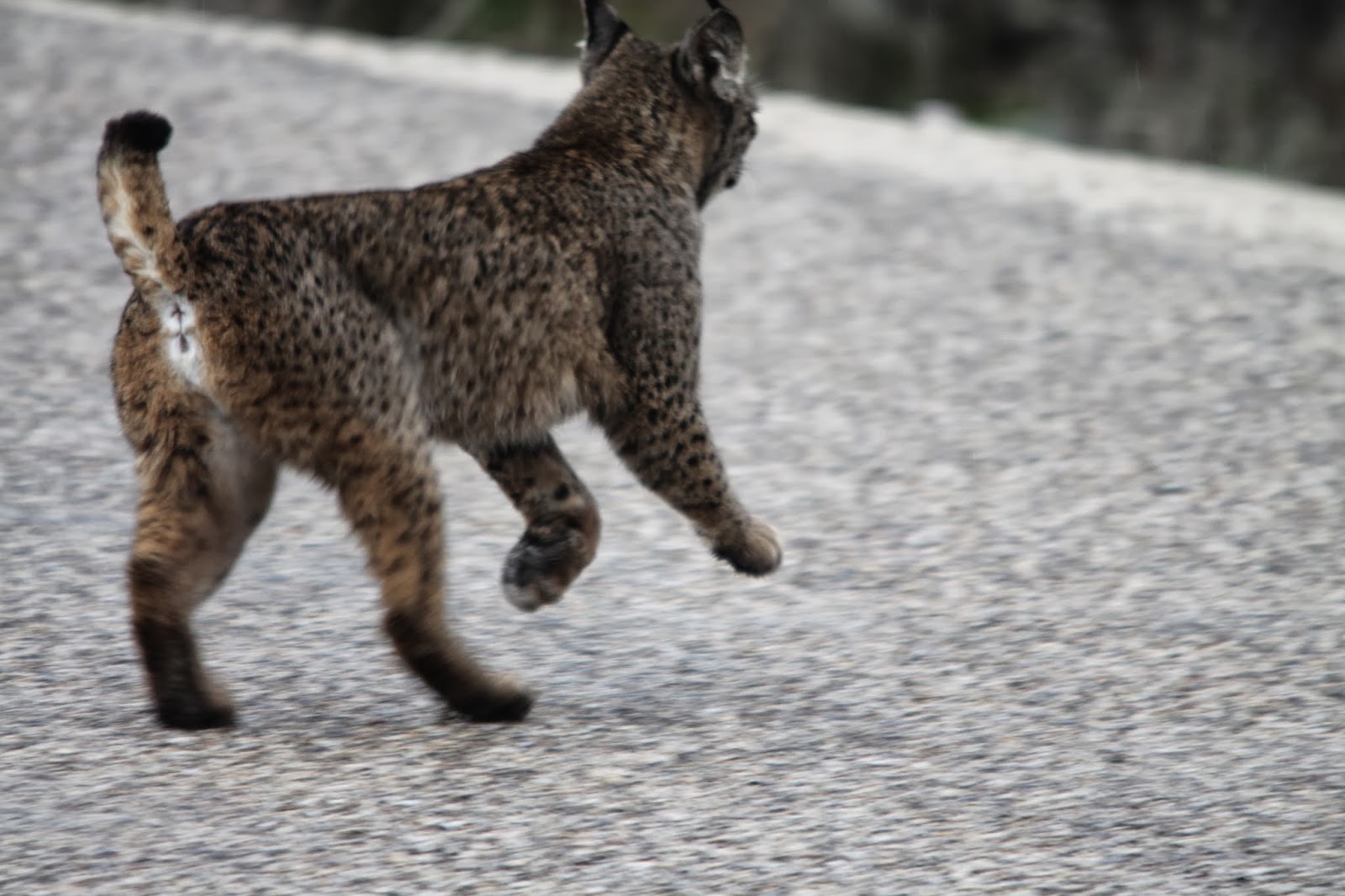 During the evening of that same day John, Pernilla and Mikael were lucky enough to connect with another Iberian Lynx, this time a collared individual,along the river bank.  This animal showed very well for over an hour, lying and resting under a dead tree before calmly moving off to disappear in the vegetation.  On the way back to their accommodation, the trio were lucky  to find 2 Stripeless Tree Frogs on the wet road.

The time had come for Pernilla and Mikael to take their leave and good-byes were said to Roland and Mercedes.  It had been a lovely stay for them with plentiful grounds for relaxing walks, interesting company and of course the home-cooked cuisine which is second to none. John particularly enjoyed the Beetroot and Carrot soup and Pernilla left with a copy of the recipe for the Brie and Leek Pie, the best she had ever tasted. 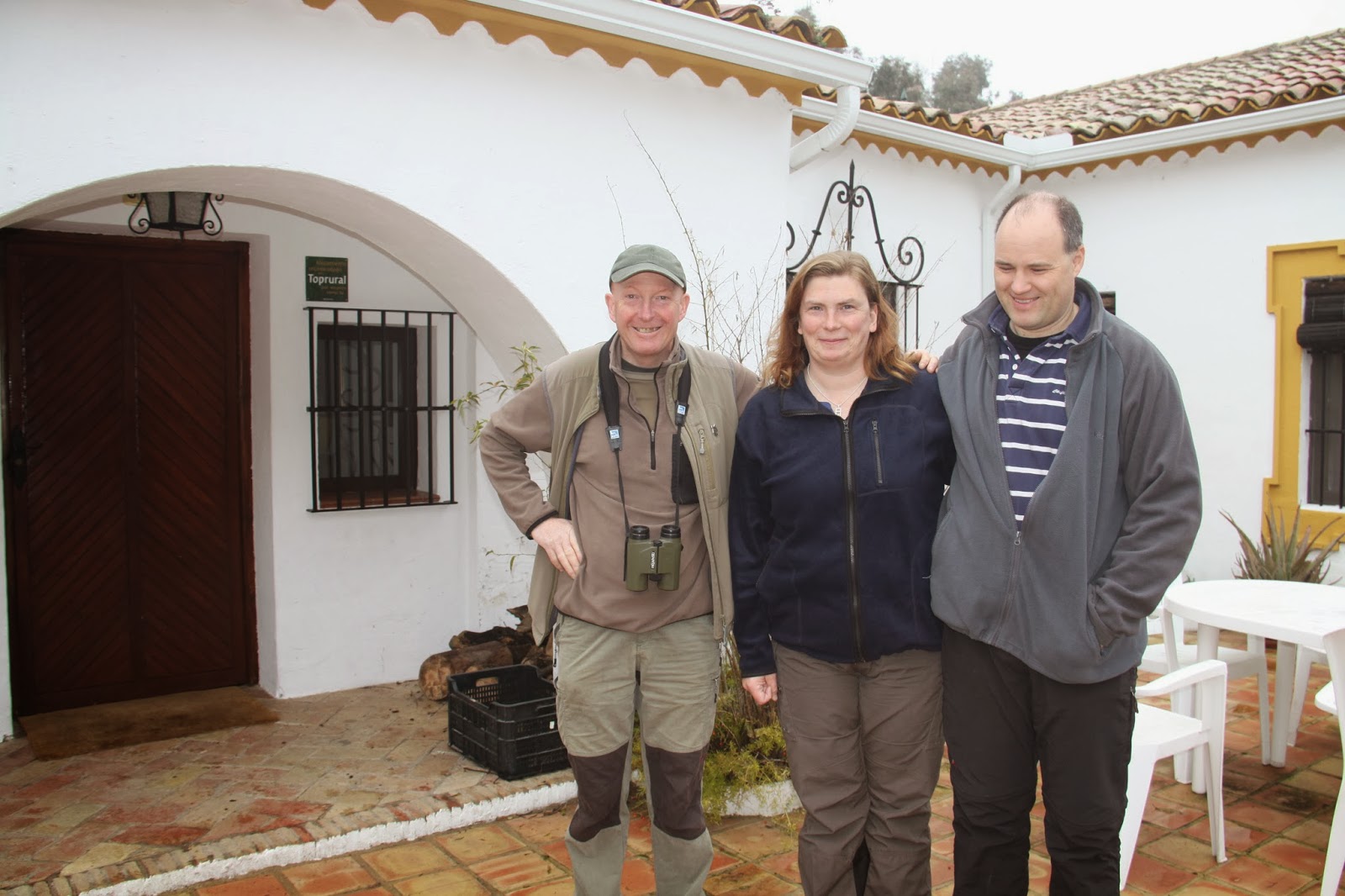 A fantastic week, full of memorable moments and one which will be part of Pernilla and Mikael's reminiscences for a long time to come. 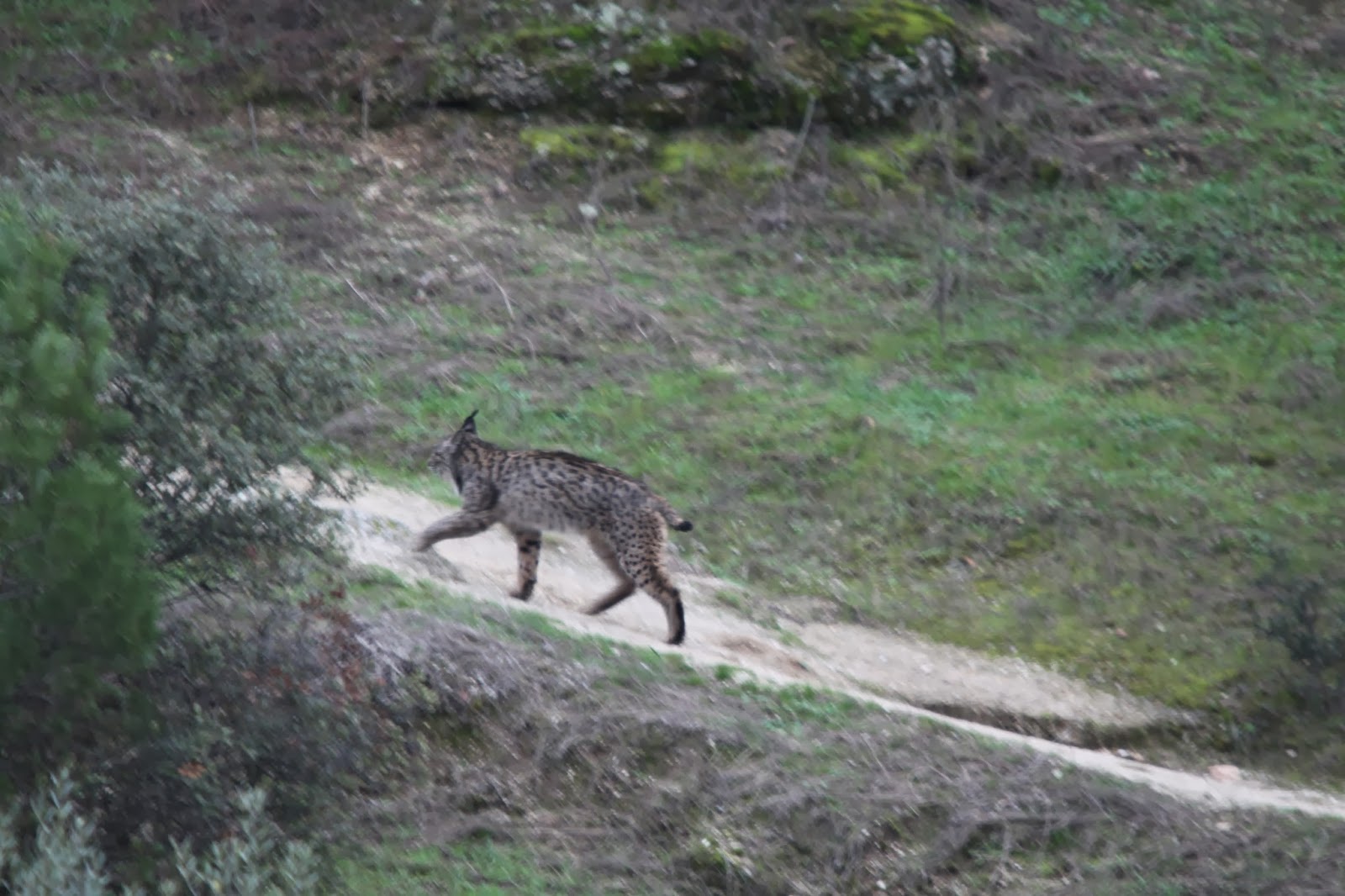 Posted by Wild Wolf Experience at 07:50